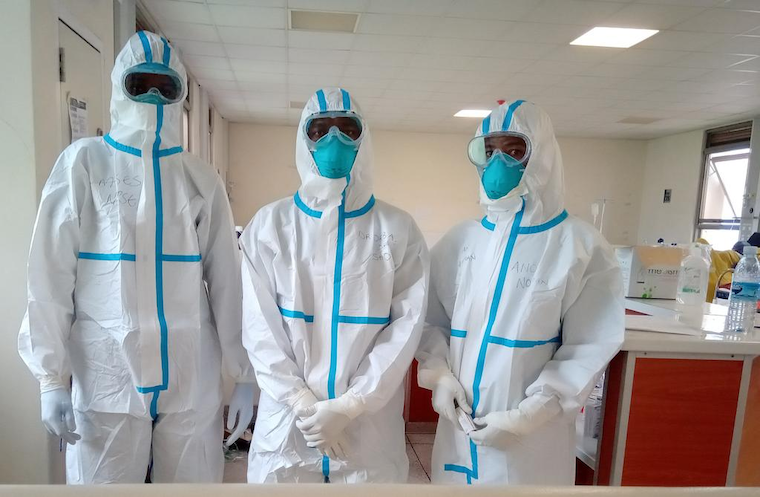 At least 16 doctors have succumbed to coronavirus disease (Covid-19) in the last two weeks according to the Uganda Medical Association (UMA).

While appearing on Capital FM radio political talk show today, UMA secretary-general Dr Mukuzi Muhereza says if you add in the other medical workers including nurses, then the number of medics that Uganda has lost to the Covid-19 pandemic is even higher.

Overall, the country has lost more than 50 health workers to Covid-19 in both the first and second waves. This is a big blow to the country's health sector which was already grappling with a shortage of health workers.

Muhereza attributed the death of the medics to a general lack of personal protective equipment (PPEs) and the high-risk situations medics are exposed to.

The second Covid wave has continued to ravage the country unabated - with the ministry of Health yesterday revising upwards recorded Covid-19 deaths by 746 raising the country cumulative deaths to 1,873. Mukuzi said the number of Covid-19 infections and deaths hasn't changed in the last two weeks.

Health minister Jane Ruth Aceng said the over 700 deaths had not been previously captured, but clinical PCR tests confirmed that they probably died of Covid-19. It is unclear under which period these deaths occurred. A further 687 recoveries (total 54,845) 37 Covid-19 deaths (total 1,910), 770 new cases (total 82,852) were recorded from samples tested on July 1.

Meanwhile, in Kagadi district, 36 health workers from Kagadi General hospital, Kabugo, and Muhorro health center IIIs have tested positive for Covid-19 and are currently receiving home-based care because they are not critically ill.

Many health facilities in the district are operating with inadequate or total lack of PPEs, putting the lives of the medics in danger. Kefa Madira, the Kagadi district head of Covid-19 case management says that the workers contracted the deadly virus since the second wave of the pandemic was reported in the country in May this year.

Madira attributed the increase of the cases among health workers to a lack of PPEs. He adds that several health facilities have run out of gloves, sanitizers, face shields, gowns, and aprons among others.

"The personal protective equipment, we do not have enough gloves to use, we have like 5 to approach these patients. Don't you think we're risking our lives? That is why when we talk of risk allowance, it must be considered. Another thing, this response is voluntary most people you see have accepted to work, nobody has been forced. In this team people have accepted to respond therefore as they respond to save others, we should also give them something little like lunch. We work the whole day up to 5 you're still here," said Madira.

The health workers are currently being managed from their respective homes under the Covid-19 home-based care because they are not critically ill. Yosia B Ndibwami the Kagadi LC V chairperson says that it is worrying that more health workers could get infected with the disease.

He has tasked the Health ministry to immediately intervene and allocate enough PPEs to Kagadi district to save the lives of health workers. While interfacing with MPs this week, the National Medical Stores (NMS) said they have PPEs in their stores but they have no transport means to take them to health facilities across the country.

And yet in May, millions were spent to swear in the useless government that does not add anything to the lives of Ugandans. They should just tell Ugandans that they are not able to pretend to run the country.

Let someone else try, you have failed so miserably! The government facilities are death trap for everyone, patients and health workers alike
Report to administrator
+1 #2 Kakinda male najib 2021-07-04 09:01
IIt is the responsibility of government through relevant Ministries to provide all relevant equipments to healthy workers,it's a shame if our Doctors and nurses are dying recklessly.

Minister of health should really come out and address this before things gets more tougher.
Report to administrator
+1 #3 Faluku 2021-07-04 13:48
Let government stock enough PPEs for Health centres across the country otherwise it will get worse if we lose more health workers
Report to administrator
0 #4 Akot 2021-07-05 13:14
Akao, understood, but,

No leader, especially the useless/bad ones, leave post unless THE PEOPLE UNITE & show them way out!

Why is the tribalistic system still standing ensuring Ugandans are powerless & Museveni's assured & protected for life?

When will Ugandans wake up?

The poorer Ugandans get & the more they surrender to being slaves of migrant Museveni, the stronger he gets!

Museveni put in place the tribalistic system & Ugandans go along with; so how on earth will he be got rid of when it's Ugandans to whom tribal lands belong, ensuring they are powerless face to the demon?
Report to administrator
0 #5 kabayekka 2021-07-05 13:16
Interesting country indeed. There are several messages going the round that the paper money currency is also infected with COVID19 Delta that is able to be transmitted through the atmosphere quite easily.

The problem is that everybody including the medical staff need this stuff badly every other minute of the day and night in order to survive.

One has heard that many rich people in this country keep their paper money well stocked in their nice bedrooms. Well how can one hope that after this military lockdown of 42 days in the country of Uganda this troublesome virus will quit and go away?
Report to administrator
0 #6 Akot 2021-07-05 13:22
Kakinda male najib, understood, but

Only bringing down the tribalistic system FIRST then UNITING, will ensure change, then putting in place the kind of governance Ugandans want & ensure the people are served!

How will things change under Museveni in power for 35 years?

It took USA 20 years in war in Afghans to realise it's not foreign intervention that will end the war!

Ugandans are locking themselves with Museveni & family through the tribalistic system for good, WHY?
Report to administrator
0 #7 kabayekka 2021-07-05 13:28
One hopes that bad financial habit of transferring loads of billions of paper money by the Bank of Uganda to the various personal homes of VIP will have to stop.

Unless the police start to allow to provide fumigation permits to many of the companies that are now sitting inactive because of the tough rules of lockdown all over the country.

Unfortunately for the rich, not many of them are prepared as yet to show to the public how much money these Christian misers might have, stacked away in their personal homes and not in their bank accounts!
Report to administrator
0 #8 Akot 2021-07-05 13:30
Faluku, agred and,

This is precisely why Ugandans MUST bring down the tribalistic system & UNITE to show Museveni/family way out & NOW, if they want a different tomorrow that they will build, control..in respect of one another through the kind of governance they will put in place!

Why is the tribalistic systedm still standing ensuring Museveni's post in the Uganda that is his family business?

What will Ugandans do when Museveni drops dead, go along with his military son?

Is migrant Museveni/family a compromise for Ugandans to ensure peace in the fake fake country?
Report to administrator
0 #9 kabayekka 2021-07-05 13:48
Actually many countries have been very active to fumigate many of the public entities especially the hospitals and to encourage the private sectors to do the same.

For example the International City of Kampala and its great KCCA, one should be able by now to see fumigation trucks and many workers doing their cleaning work in the streets, back alleys, and the front portions of the thousands of shops!

Paying for more security and guns so that people can go home and sleep 24 hours, 7 days for a month or two, will not deter the spread of COVID19 Delta.

Twebaka kutulo does not work anymore in these years where the people of Uganda have learnt to survive and improvise to make a very difficult living!
Report to administrator