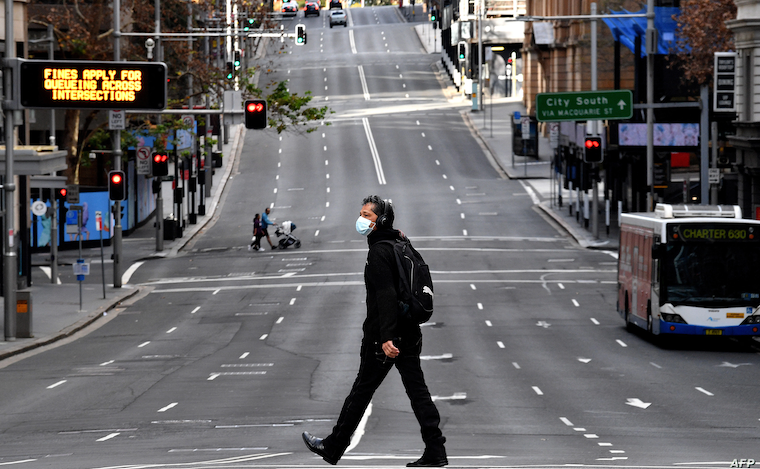 A man walks along the main road in the central business district of Sydney, June 26, 2021, as Australia's largest city entered a two-week lockdown

The delta variant of the coronavirus is sending Australia, New Zealand and Bangladesh into some form of lockdown, along with parts of Portugal. Even Israel, where more than half of the population is vaccinated, is reimposing a mask mandate in enclosed public places.

The variant, first discovered in India, has been identified in at least 85 countries and “is the most transmissible of the variants identified so far … and is spreading rapidly among unvaccinated populations,” World Health Organization Director General Tedros Adhanom Ghebreyesus said Friday.

Sydney, Australia’s biggest city, on Saturday began a two-week lockdown because of the growing number of cases of COVID-19, the disease caused by the coronavirus.

The delta variant is to blame for the first lockdown in Sydney since December. Stay-at-home orders will also apply to other areas in New South Wales, Australia’s most populous state.

New Zealand, because of the Australian outbreaks, is suspending quarantine-free travel between the two neighbors for three days. On Monday, Bangladesh enters a national lockdown for a week, with people allowed to leave their homes only for medical reasons.

The delta variant is also behind a surge in cases in Russia. St. Petersburg, which next Friday will host the quarterfinal of the Euro 2020 football matches, on Saturday announced that there had been 107 COVID-19 deaths, a daily record for the city since the pandemic began.

And the variant is prompting alarm across Africa, where cases rose 25% in a week.

Reuters quoted virologist Tulio de Oliveira, director of research at the University of KwaZulu-Natal in South Africa, as saying, "We are in the exponential phase of the pandemic with the numbers just growing very, very, extremely fast."

Meanwhile, health officials said the delta variant of the coronavirus has its own variant, called delta plus. It has emerged in almost a dozen countries, including India, the United States and the U.K. Authorities fear delta plus may be more contagious than the delta variant. Scientists are just beginning to study the new strain.

The Johns Hopkins Coronavirus Resource Center reported Saturday that the global count of COVID-19 cases had reached more than 180 million. The U.S. continued to have the most infections with 33.6 million, followed closely by India with 30.1 million and Brazil with 18.3 million.

Why is China not COVID-19 stricken like other countries? I see you have a few answers to this.
Report to administrator
0 #3 Wainanchi 2021-06-29 17:19
What is this and who is planting the seeds of devil? Who wants to decimate humans and why,?

Don't we have outstanding instruments and technologies to reach the Mars and yet cannot find how come viruses appear and ,mutate and kill humans ?

Where the hell are all these famous scientists gone when the whole Earth is shaking abd traveling and wearing masks and dying.

Where are Nobel prize laureates and what is Secretary General Ghuteras doing in his huge building and getting fat chacks for what ?? Ghutwresh resign;!!
Report to administrator