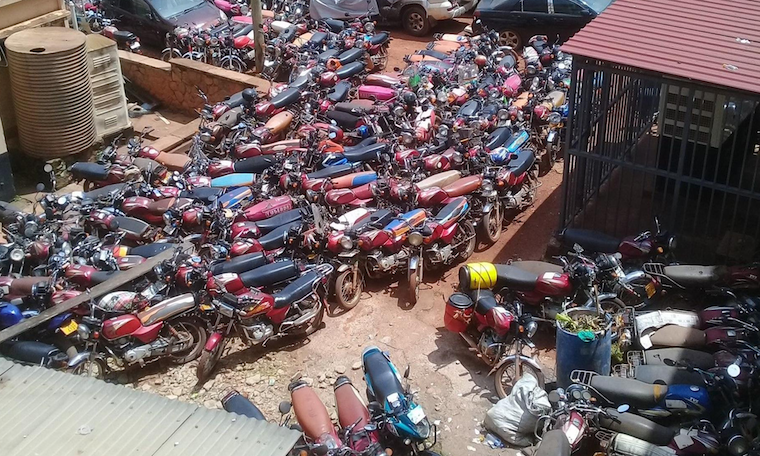 The police have so far collected a cumulative total of Shs 330.3 million in two weeks from motorists flouting a presidential travel ban.

Records compiled at police headquarters show that by Monday riders of the 2,430 out of 2,762 motorcycles impounded last week had paid Shs 40,000 each to get back their motorcycles. This totals to Shs 97.2 million.

The statistics also indicate that drivers of the 493 out of 600 impounded cars had already paid express penalties of Shs 100,000 totalling Shs 49.3 million. The total amount of money paid by riders and drivers last week totalled Shs 146.5 million.

Two weeks ago, President Museveni banned the inter-district movement in a bid to control the spread of Covid-19. However, several drivers particularly taxi drivers and riders attempted to ferry passengers from one district to another using access routes but ended up being apprehended by the police.

Police spokesperson, Fred Enanga, said the public should expect tougher action against all riders, drivers and everyone who has continued to blatantly and deliberately flout the new lockdown regulations. Enanga said the time for pleading with people to respect Covid-19 guidelines and directives has stopped.

“All along we have been pleading with the public to follow SOPs, but now we have reached a stage where the endless reminders must stop in exchange for stricter enforcement. For emphasis, all our front-line officers have been given guidelines to follow at checkpoints and how to verify the bar codes or all stickers issued by the ministry of Works and Transport,” Enanga said.

URN understands that all the 3,655 motorcycles impounded between June 6 and 13 have paid Shs 40,000 each thus earning the government Shs 146.2 million whereas the 376 cars have also been handed back to owners after paying Shs 100,000 express fines each totalling Shs 37.6 million. This means Shs 183.8 million was collected in a space of seven days.

“In the beginning, taxi operators on both sides of the district were ferrying people to the border crossing points, where passengers could walk on foot and cross into the neighbouring district, the board to the KMP area,” Enanga said.

Breach of inter-district, according to police, were common in areas of Lugazi–Mukono, Njeru-Jinja, Kyotera-Masaka, Ibanda-Mbarara, Mpigi–Kampala, Wakiso–Luweero and Kakerenge centre. Enanga reminds non-essential drivers not to be tempted to be on roads because their vehicles will be impounded and subjected to fines.

Police sources said commanders have been forced to give drivers and riders express tickets after Police Operations Services director, AIGP Edward Ochom, ordered for a probe on how impounded cars and motorcycles were being returned to owners without paying fines.

0 #1 M!K! 2021-06-24 01:57
It is clear that Uganda's second lockdown was haphazardly announced without giving much thought about the disruptions it would cause in the country.

Certain measures adopted during the first lock-down were not necessary this time around because the country is now more prepared.

The majority in the public have masks, SOPs are more clearly understood, the hospitals should be more prepared (if they are not this is Mr. Museveni's failure).

The ban on public transport omnibuses and buses may be justified given its nature in Uganda. But why ban open body transport like pick-ups and boda boda if all operators and passengers wear and travel in the open?

Why ban ban travel by private cars whose occupants may just happen to be members of the same family who live together?

And why impose fines in an economy that is shut down? Why create another layer of corruption by imposing arbitrary travel chits/permits? Who is expected to patronize the few still open businesses?
Report to administrator