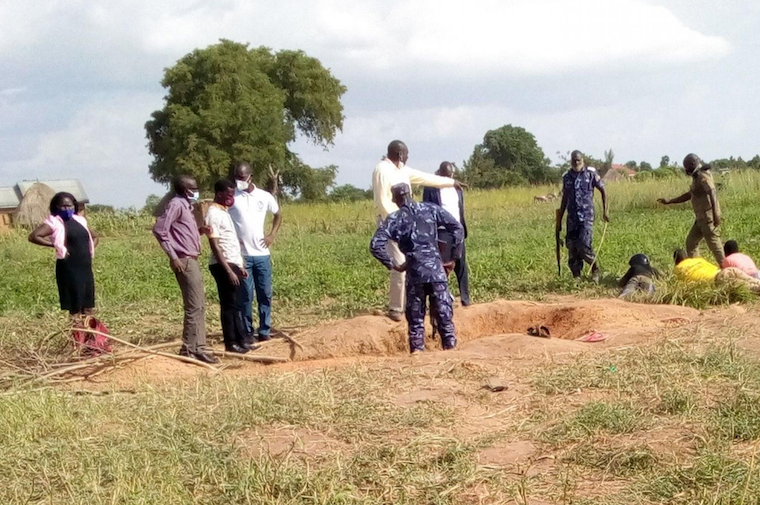 Police has since condoned off the area over safety concerns

There is panic in Kokong village, Ngora district in eastern Uganda after residents discovered three underground tunnels. The tunnels were discovered about three weeks ago at the home of George Odeke while digging a pit latrine in his compound.

The tunnels that spread in three different directions were discovered by Justine Okello who was digging a 8.5ft pit. One of the tunnels is approximately 100 meters wide while others are narrower but longer and compacted with murram.

The bigger underground clearance is two metres high from the base in some parts while in other parts it measures between two to four meters high. It has a prolonged channel inside - measuring close to one kilometer. Odeke says he started digging the pit last month before falling sick. He then hired Okello to help him continue with the work but it was shocking to discover a network of tunnels underground.

Odeke explains that he spotted the area for the pit after seeing some murram on the surface since the area has soft soils. He adds that it is the third pit at his home after he successfully dug two other pits; one measuring 12 feet in 2008 and another 15 feet pit in 2010. He, however, notes that all the pits caved in after being in use for some time.

“The first pit latrine sunk down after one year in use while the second pit sunk down soon after it was covered, ready for use. But we didn’t find any tunnels in those two pits. I’m very surprised with what has happened in my compound," he said.

Odeke says he is now living in fear since he doesn’t know who dug the tunnels and for what reason. Okello, the pit excavator says he found very hard murram just at the surface, something he notes was unusual for most parts in the area.

“I almost gave up but my brother encouraged me to continue. As I penetrated through the hard murram, I discovered that the underground was hollow. After removing the soil, I found the tunnels and that scared me from continuing," he said.

Inside, the tunnel is walled with murram but leaking in some parts with some loose soils now falling. The loose soils are blocking another route; its length was not yet determined due to limited accessibility.

Margaret Awekonimungu, the acting district environment officer in Ngora district says she has contacted National Environment Management Authority (NEMA) to analyze the ground in order to help explain the existence of the tunnels. Hundreds of people are now flocking Kokong village to check out the tunnels. Police has since condoned off the area over safety concerns.

The same tectonic plates shift is said to have been responsible for the long earth cracking/sink hole recently observed in Eatern Kenya.

These tectonic plate shifts occur over very long periods and can create under ground cracks, crevices, cave like structures before they eventually work their way to the surface. This gentleman"s land may be sitting atop of such a fault line.
Report to administrator
0 #3 Miki 2021-06-22 18:49
And Ngora is at almost the same latitude of the recently cracked area of western/central Kenya and may longitudinally be the western edge of land mass wedged between the two fault lines.

The increasing incidents of land slides in the mountain Elgon area may also be linked to this tectonic plates shift as well. Chances are that more 'tunnels" of this kind may be discovered and more so depending on the areas' rock and soil types.
Report to administrator
0 #4 makh 2021-06-22 19:15
As common in today's Uganda, you can see three people lying down with a policeman holding a stick and gun.

This country is just sinking day and night.
Report to administrator
0 #5 WADADA rogers 2021-06-22 20:25
It should have have been an underground water channel that has since dried from its points of origin hence leaving a hollow path.

This cannot be linked to the Bachwezi and is not a road as many have concluded The Chwezi dynasty did not stretch as far as Teso region but along the Albert .
Report to administrator
0 #6 Kalibbala 2021-06-22 20:50
Another Hypothesis is These Ancient Caves near Nyero Rock Shelters!!

Maybe they were Housing our Ancestors Who used to Dwell in these Areas!

The Brits trained their Kings African Riffle (KAR) soldiers in that area for (the WW2) before our independence. Any Historians out there?

Antiquities ministry would have sent historians to ascertain/investigate the tunnels by now, in conjunction with a security agency.

This team would , before the site is damaged, determine whether the tunnels are recently dug, or have some historical significance to be gazzeted for tourism , or whether a criminal gang or peasant miners have been using it for smuggling stuff.
Report to administrator
0 #8 kasede 2021-06-23 11:46
Quoting Miki:

Most likely a result from the ongoing Africa geo tectonic plates shift. ....

This hypothesis cannot be valid because: (1) we are told that the tunnels have lining of gravel. The lining of the tunnels points to "work of man" & not the "work of natural forces".

(2) Dry underr-ground rivers cannot explain the lining of the tunnels. (3) Knowledge from the formation of rift-valleys or earthquake or land-slides, etc produce MAINLY lines of cracks.. (4) Techtonic forces are deed & are of very high magnitude. They cannot be attributed to have caused miniture effects like these ones.

The Brits trained their Kings African Riffle (KAR) soldiers in that area for (the WW2) before our independence. Any Historians out there?

Antiquities ministry would have sent historians to ascertain/investigate the tunnels by now, in conjunction with a security agency.

This team would , before the site is damaged, determine whether the tunnels are recently dug, or have some historical significance to be gazzeted for tourism , or whether a criminal gang or peasant miners have been using it for smuggling stuff.

I agree with you that under normal circumstances, the Antiquities ministry should clarify this finding

BUT Uganda of today is not a normal state that we expect it to be. The Antiquities ministry is not part of the military. The military or M7 decides everything.
Report to administrator