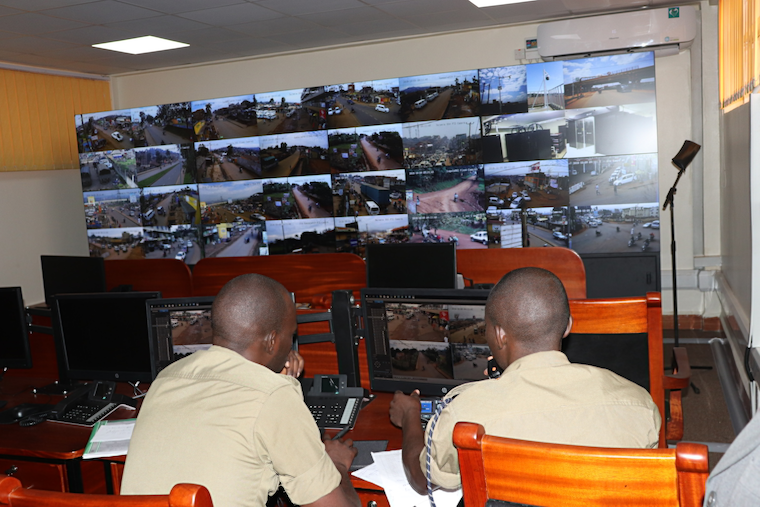 Security closed Circuit Television (CCTV) operators have raised concerns over the long working hours they are subjected to, which affects their ability to closely monitor all events happening in the city.

The operators work for more than 12 hours a day and are expected to stay glued on the screens, taking a keen interest in the developments and peculiarities around the city. One of them told URN that they have requested to work for at least six hours a day in vain.

URN engaged some police officers attached to CCTV monitoring centres in Kampala metropolitan after learning that two warnings had been issued to them by ICT and CID directors prior to the shooting for former army commander, Gen Katumba Wamala.

In the warning issued on May 14, the police director of information and communication technology Felix Baryamwisaki expressed dismay with the fact that CCTV operators were entering monitoring rooms with mobile phones which would detract their full-time attention and concentration to security cameras.

Baryamwisaki called upon district/division police commanders (DPCs) to inform CCTV operators to avoid entering monitoring rooms with mobile phones or else be prepared to face the police force’s disciplinary court.

Police spokesperson, Fred Enanga said CCTV monitoring rooms need full-time attendance so that the real-time intelligence provided by these cameras is put to effective use. He said the full-time vigilance of the CCTV monitoring team enables them to send signals to motorized patrollers for a timely response.

But the CCTV operators say that they would be more efficient on the job if their working hours are reduced and that they should be given special gear to protect them from lights produced by the LED monitors saying that excessively watching these monitors is likely to affect their eyesight.

“It is not easy to be seated in one place with your eyes glued on a monitor for twelve hours. We also get tired and bored,” a CCTV operator at one of the monitoring rooms in Kampala said.

The security camera operators said they would wish to be given accommodation just like their colleagues attached to National CCTV Command Centre at Naguru, so that they can respond to emergencies in the event that anything happens when they are already out of the station.

CCTV operators at the National Command Centre also face similar challenges and CID director Grace Akullo, through the head of the homicide unit, Monday Johnson has already warned them against persistent absence and dodging work.

The 2020 police crime report list some of the security incidents that were responded to in real-time intelligence. One particular incident captured by CCTV cameras was at Ave Maria Stage in Kabalagala where cameras captured a group of five criminals who were grabbing a woman off a moving motorcycle.

The intelligence responded in time to identify the suspects and notified the field officers. Subsequently, the facial identifications were captured by intelligence, and six associates were arrested and charged.

Unlike other installations in the city, an official at Uganda Civil Aviation Authority said their monitoring system is almost automated and a few personnel attached to it just take recordings. The CIA official said security at Entebbe airport is both human and technology-based.

“We have a person who provides security in the building at the airport in addition to security cameras. We deploy human beings because of corridors within these buildings. We don’t make changes,” a CIA official said.

The CCTV management in such a modern international city like Kampala is failing to impress its workers that technology has come to stay and very much ready to take their jobs or to write them off.

To think that these small time operators were doing a good job is unfortunately not true. This sort of attitude to work on the part of many professional staff in this country is the same.

Many still believe mistakenly that they will have their very important jobs for ever. And they are working ever hard to make sure that they keep them for all their life.

Another good example is in the medical health industry where technology in developed countries has been allowed to take over many tasks to fast treat patients and reduce unnecessary human suffering.
Report to administrator
-1 #2 PaulM 2021-06-20 06:26
These CCTV cameras should be connected to a computer with software that can automatically detect a gun and send out an alarm.
Report to administrator
+3 #3 wabomba 2021-06-20 09:14
these officers have a point, there are conditions in working in a cctv ctrl room-operators are supposed to have a mandatory 15minutes break every 2 hours-reason if one is glued on the screens, he/she will loose focus and will seem to visualize the same image-the break helps operators to refresh their vision-secondly the seating MUST be comfortable not the cheap wooden hard chairs-they must also have a free eye test annually
Report to administrator
0 #4 Mweru Samuel Byachi 2021-06-21 13:41
I have read and noted with grave concern that these operators work for 12 hours non stop!

while they ask for 6 hours, my recommendation would be 4 hours to ensure maximum concentration. Let commanders not play with this huge investment by manning it poorly.
Report to administrator