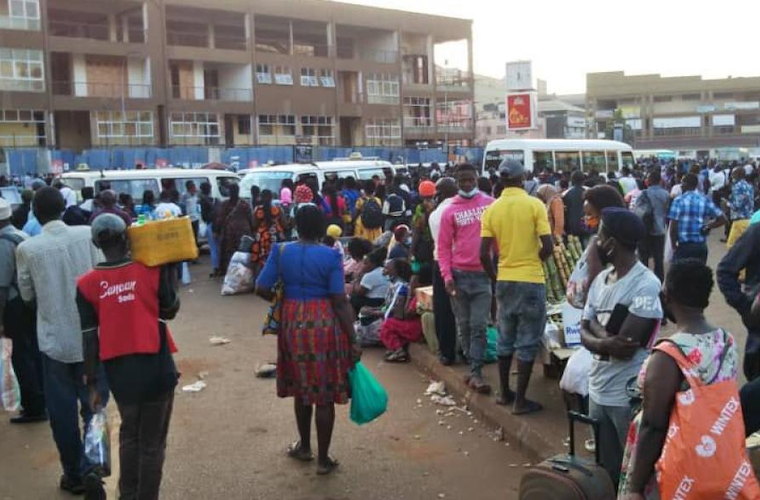 The head of the Anti-Corruption Unit of State House Col. Edith Nakalema, has directed bus companies that collected money from students for travel upcountry but never offered the service, to refund it immediately.

Nakalema raided bus parks in Kampala where she arrested and also stopped bus operators from hiking transport fares for the surging upcountry travellers. The transport crisis arose out of President Yoweri Museveni's directive, banning inter-district travel exception between Kampala-Wakiso and Mukono for 42 days effects today June 10 as a means to curb the spread of COVID-19.

Nakalema says the bus companies that extorted money must refund it within a period of seven days. She says bus companies must work with the residence district commissioners (RDCs) to ensure that the affected passengers receive the money at the district headquarters.

On his part, the chairman Uganda Allied Bus Owners Association, Solomon Nsimire apologized for the mistake and vowed to collaborate with the government towards recovering the money from the bus companies that will be found culpable.

Nsimire who was not able to tell how many companies were involved in the practice, says they are yet to establish which companies these are from among the over 150 companies they have. He, however, says his worry is on the verification of the tickets that were issued by the bus companies.

Nsimire also indicates that the issue of refunding money to the passengers who were transported by these bus companies but were overcharged cannot be affected in case it is proposed.

Nsimire says that buses find it hard to operate on a one-way route and they had to recover this fuel of the return journey through an extra charge though he admits that some companies overcharged.

Meanwhile, Nsimire says his office has so far not received any complaint from any passenger about being charged and failing to receive the service by a bus company despite not disputing the fact that passengers suffered extortion.

+3 #1 Webz 2021-06-11 00:37
The cause of all this is poor planning by the Executive who simply closed down sectors of the economy without meditating about the effects.

Apart from extortion by the transporters, the biggest effect is that the whole exercise became a corona virus super spreader.

We hear that the president has a legion of big-salaried advisors, what are they for; or the man is just Tibahaburwa?
Quote | Report to administrator
+1 #2 Mandela 2021-06-11 08:00
Eh,,, all along I thought we are in a free market economy. Was I wrong?
Quote | Report to administrator
+3 #3 Concerned Ugandan 2021-06-11 12:24
Under what law is the money recoverable? Government business is not a matter of emotions and histrionics.

The bus operators may have acted in an exploitative manner but there is no law against what they did. Government would have been better off registering stranded passengers and hiring buses to ferry them to their destinations.

This would have automatically caused the bus operators to cut the fares back to normal or even below normal rates to avoid losing business.

Nakalema's intervention is another example of government reacting to chaos of its own making with even more chaos!

Cheap popularity in the name of doing government business is exactly that! CHEAP! It is ultimately of no long term benefit to us as taxpayers!
Quote | Report to administrator
+3 #4 Lugwamoi Samuel Odye 2021-06-11 13:58
Bus company take advantage of the situation to cheat travelers, passengers are not responsible for paying extra money because the buses want to travel back empty, its never true that the buses come back empty,
Quote | Report to administrator
Refresh comments list
RSS feed for comments to this post
Add comment