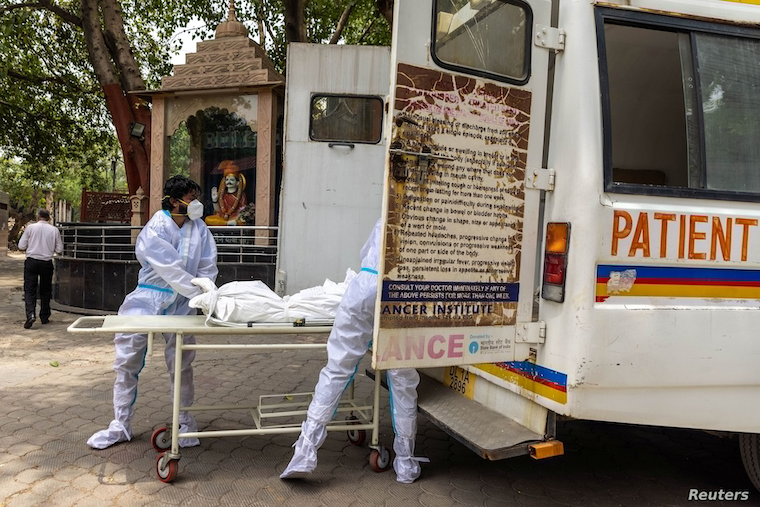 Health workers carry the body of a person, who died from complications related to the COVID-19, for cremation at a crematorium in New Delhi, India

India posted a single-day world record Thursday of more than 6,000 COVID-19 deaths after one state revised a set of numbers.

The eastern state of Bihar, one of India’s largest and poorest states, revised its death toll Wednesday from about 5,500 to 9,500 after the state’s High court ordered the government to review its records.

Many experts have said India’s death toll is far higher than official reports after a devastating surge of new infections in April and May saw the emergence of hundreds of makeshift crematoriums and scores of bodies floating in rivers.

The revised count pushed India’s one-day death toll to 6,148, outpacing the 5,444 recorded by the United States on February 12, according to Reuters.

The world’s second-most populous nation now has 29.1 million total confirmed COVID-19 cases, including 355,705 deaths, according to Johns Hopkins Coronavirus Resource Center, second only to the United States with 33.4 million total cases and 598,766 deaths.

In other news, a study published Wednesday in the journal Nature Medicine reveals a slightly higher risk of a bleeding disorder from the AstraZeneca COVID-19 vaccine.

Researchers discovered some people who received the AstraZeneca vaccine in Scotland had developed a condition called ITP, or immune thrombocytopenic purpura, which causes bruising in some cases and also serious bleeding in others.