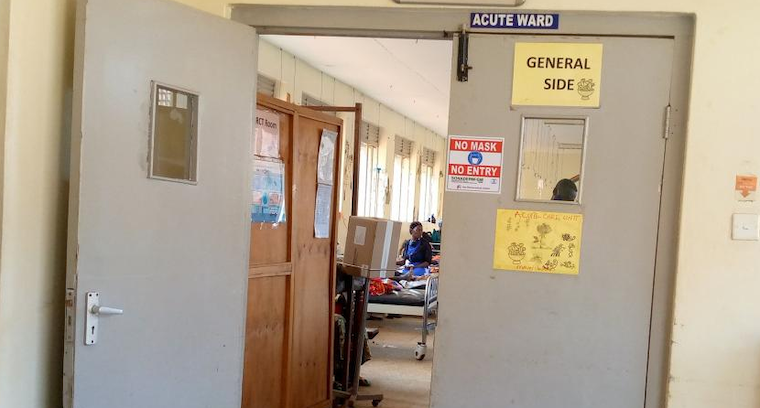 The Acute award at Mbale hospital

At least 64 children have died at Mbale Regional Referral hospital in the past 68 days, URN has learnt. The deaths occurred in April, May, and early June. This literally means that at least one child died at the facility each day. Records show that the hospital lost 20 children in April, another 28 in May and so far 16 children have died this month.

According to the records, the deceased children were aged between 4 and 10 years. On May 30th alone, over 5 children are reported to have died in the acute ward. The authorities blame the problem largely on the acute shortage of blood in the hospital.

Christine Ruth Nabirye, a nurse in the acute ward listed a number of reasons ranging from the shortage of blood in the facility, understaffing of health workers in the ward to the delayed referral of the children from the lower health facilities as the cause of the deaths of the children.

She says that there are only 7 out of the required 15 nurses meant to man the ward. She explains that at least one staff is always away on leave each month, leaving only six nurses on duty. According to Nabirye, the policy requiring nurses to pick results from the laboratory has worsened the already complicated situation. She, however, also notes that many of the children die on arrival because of delayed referrals.

Like Nabirye, Mbale hospital director Dr Emmanuel Tugaineyo says the hospital is struggling with blood shortage, adding that five children died on May 30th because they couldn’t find blood, which matches their blood group. Tugaineyo says it is unfortunate that they lost such a number of children in one day.

“I request the public to be cooperative and donate blood,” he said. Dr Ahmed Bumba, the manager of Mbale Regional Blood Bank, says they currently have more than enough blood. According to Bumba, Mbale hospital receives more blood compared to any other facility in the region.

He says that the hospital requested 721 units of blood last month, which was provided. Dr Bumba faulted the hospital for failing to account for the blood they receive from the blood bank, saying that they have never lacked the blood of any group because they keep contacts of people with rare blood groups to help others in case of any emergency.

“We had a meeting with the permanent secretary of the ministry of Health Dr Diana Atwine about the issues of blood within Mbale Regional Referral hospital. It was discovered that the hospital sells blood to patients. We resolved that the hospital makes a report on each unit of blood given out, which is yet to be implemented,” he said.

Adding that “the management of the hospital should stop using the excuse of lack of blood but rather work on their weaknesses like absenteeism of medical workers at night and lack of accountability for blood given to them.”

Edward Khauka, one of the parents who lost a child on May 30, posted a message on the Mbale District Covid19 task force WhatApp group that six children died on that fateful night due to the absence of a doctor, clinician and blood since the facility was being manned by one nursing assistant.

“Horrible! Six 06 Children die in Mbale Referral Hospital in 3 Hours due to lack of a Doctor or clinician & Blood on Acute Children's Ward, it's left under the management of 01 nursing assistant. The media should capture this so that the director gives an idea of what is happening in the Hospital. If the doctors or clinicians or even student doctors and nurses are on strike, let the public know. How can all the doctors switch off their phones” he posted in the group.

Dr Tugaineyo refutes claims of absenteeism of medical workers and the sale of blood, saying those who fell prey should come out and report to the hospital administration.

And people would be linining up behind them clad in yellow uniform. Africa is a really cursed continent for real! There is no hope in most part of Africa. In the meantime, they will spend billions renting spaces for MPs, buy them ipads, suv, large allowences when every law is made by one man!

Poor children, why do so many of them need blood anyway? Is there famine there such that lots of them have anemia? I am beginning to doubt that there are really 40m people in Uganda, with so many deaths happening
Report to administrator