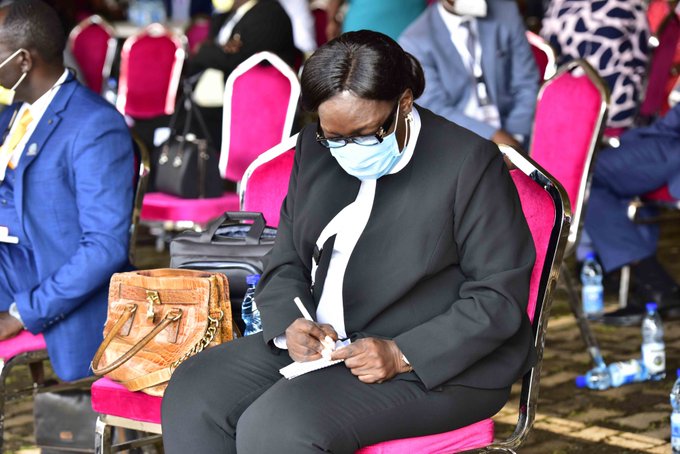 Rebecca Alitwala Kadaga, the former speaker of parliament rejected an offer to be appointed vice president and set conditions that this would only be possible if it came with another portfolio.

Kadaga was reportedly involved in the negotiations after her recent fallout with President Yoweri Museveni when she opted to defy the National Resistance Movement central executive committee and contested against her erstwhile deputy Jacob Oulanyah for the speaker's seat.

Speaking to URN, a close confidante of Kadaga who asked not to be named in order not to jeopardize their relationship said that the Kamuli Woman MP said she disliked the position of vice president because it's hollow. Kadaga in the past made similar statements while she campaigned for the position she eventually lost.

“She said there is no work for the vice president and she doesn’t just want to sit there and do nothing. Therefore, if they don’t appoint her to another ministerial position on top of the vice presidency, then she would decline the appointment,” the confidante said.

She added that Kadaga who has served for 10-years as a speaker and 10 years as a deputy speaker, said she was ready to become a backbench MP than pretend to be a vice president who will do nothing. Kadaga who has previously served as minister for Regional Cooperation has now been appointed as the 1st Deputy Prime Minister and minister for East African Affairs.

The president instead appointed Maj. Jessica Alupo to the position of vice president, to take over from Edward Kiwanuka Ssekandi who was dropped from the cabinet list.

Meanwhile, Joyce Nabbosa Ssebugwawo, the current deputy president of the opposition Forum for Democratic Change (FDC) party for Buganda region has allegedly accepted the appointment, as state minister for ICT and National Guidance.

According to two confidantes, we have spoken to for this story, Ssebugwawo who shocked many after she was appointed minister, said she is ready to work with a man she has spent over 20 years opposing.

“She is waiting for the tempers to cool down for her to speak on the appointment,” the confidante said.

Ssebugwawo didn’t pick calls to her known number when we reached out to her but according to reliable sources within the FDC, when Ssebugwawo lost the Lubaga Division chairperson position, she was approached by people within Museveni’s circles and asked whether she could take up an appointment by the president.

“She has been in contact with them and she should never say she wasn’t consulted,” the source said.

He however added that Ssebugwawo would face an uphill task during the parliamentary vetting process.

“I was surprised that she was appointed because I was told she has no qualifications,” the source said.

For anyone to be appointed minister, she or he must have qualifications of being a member of parliament. These include being18 years and above and also having A-level or its equivalent as academic qualifications.

Betty Kamya, and now Sebugwawo are some of victims of this phenomenon. After many years of making a very good case why Museveni and NRM should go, they cross over unaided despite Museveni sticking to his guns.

They are either good girls gone bad, or bad girls found out. As the venerable Kizza Besigye once said, Ugandan politicians are simply job seekers.

They don’t go into politics to make a change. They simply join politics to survive. Without wishing to sound misogynistic, Ugandan women have outdone Ugandan men in propping up this evil regime. No wonder Museveni has rewarded them handsomely. They are his main co-conspirators.
Quote | Report to administrator
+5 #2 Loveuganda 2021-06-10 05:17
For Kadaga this is a humbling experience that she has to have Nabanja as her supervisor.

Many of us have gone through that experience where they appoint a junior over a senior with experience due to many factors. Let her keep her head high.

God will open another door. For Sebugwawo this a wait for disaster. That ministry needs one who is savvy not elderly person like her. Electronic community is very fast with it's communication.

She would need to be on top of her game all the time. M7 appointed her to ridicule FDC. Can one say she was a mole all this time or just to be used like Nakiwala. Good luck to everyone including Nabanja. Uganda enyuma.
Quote | Report to administrator
+4 #3 WADADA rogers 2021-06-10 10:00
Verily verily do i say unto to you that there is no way Sebugwawo's name would end up on that list without her consent, she must have been working under cover for the NRM and for Museveni for a long time just like many others in FDC.

Others were not included on the list for reasons for remaining clandestine. In fact all the FDC top guns are in bed with NRM, that explains why Besigye has kept away knowing that the party was sold
Quote | Report to administrator
-7 #4 magezi moses 2021-06-10 10:11
it is very bad for buganda and baganda they are not realable the likes of bette kamya ssebagala kanyike and many athers
Quote | Report to administrator
+1 #5 Lakwena 2021-06-10 14:41
In other words, especially to NRM members, Ugandans must wake up. Otherwise only Evil/Satan undermines and humiliate others

In other words Politics without Principle and the pursuit of wealth without work; are our worse enemies.

What does it benefit a man if he gains the whole world but loses his soul?
Quote | Report to administrator
+3 #6 rubangakene 2021-06-10 14:55
FDC's girl joins cabinet with a bunch of other election losers, with no mandate from the Ugandan voters who have identified their weaknesses.

Meanwhile, trenchant Kadaga has settled for 'crumbs', so to speak. What has happened to good old fashioned principles? The greed reeks!
Quote | Report to administrator
Refresh comments list
RSS feed for comments to this post
Add comment