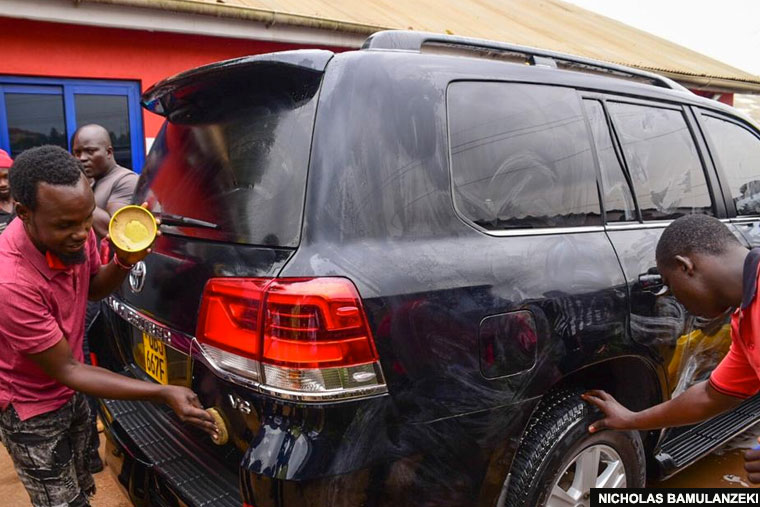 The tax body returned the vehicle that they impounded over tax issues today Tuesday. URA impounded the vehicle in April after the High court cleared the tax body to re-inspect and reassess its value. After re-examination, URA slapped new taxes of Shs 337 million about $93,420 on the Toyota Land Cruiser V8 Reg. No. UBJ 667F after confirming that it was indeed bulletproof.

In a June 7 letter to Kyagulanyi’s lawyers led by Anthony Wameli, the URA commissioner general John Musinguzi Rujoki, said that they had received instructions from the president to return the vehicle to the owner immediately.

“This is to inform you that we have received a directive from His Excellency the President of Uganda to effect that Uganda Revenue Authority should release your client’s motor vehicle immediately,” the letter from URA reads.

Adding that, “In the light  of the above, please  liaise  with the commissioner customs  who  by copy hereof  is requested  to facilitate provisional  release  of your client’s  vehicle  immediately.”

However, Rujoki notes, “the outstanding tax is still due and payable. The final amount will be communicated to your client in due course after the review of the proposal”.

Shortly after receiving the vehicle at his home in Magere Kasangati in Wakiso district, Kyagulanyi described Museveni’s directive to URA as a publicity stunt.

“I first saw a letter that. Museveni had directed that my car be given back. That is a gimmick to be used as a string against me,” Kyagulanyi said.

He said the decision is a clear manifestation of how state institutions have been hijacked and work on “orders” of the president.

“It shows that all state institutions have no power. They are under captivity by Mr. Museveni why didn’t URA follow the right channels in returning the car but had to wait for Museveni?" Kyagulanyi asked.  Kyagulanyi also used the same occasion to demand that the government release hundreds of his supporters still in prisons over political reasons.

Kyagulanyi also revealed that his team would first examine the vehicle before he uses it. Kyagulanyi said it's his supporter supporters in the diaspora who donated the vehicle shortly after the disputed January 14 general polls.

Remember most of the poisons killing people in Uganda seem to come from former communist countries.

I wouldn't advise Kyagulanyi to even step in the car. museveni is shameless, you die and he will feign ignorance - Katumba's case ?
Report to administrator