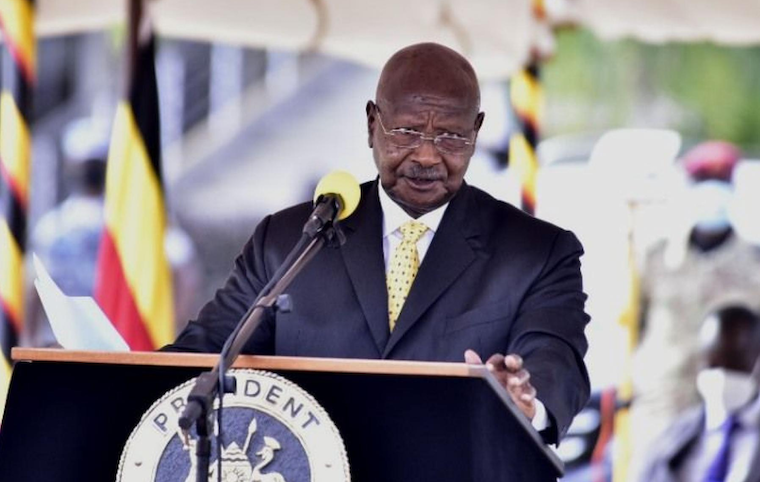 'Good-for-nothing' police officers, failing to use modern technologies and tools are to blame for the increased criminality in the country, President Yoweri Museveni has said.

During his State of the Nation address delivered to MPs at Kololo Independence grounds today Friday, the president said if the police officers had done their duty and monitored the security cameras, the assailants who attacked former chief of defence forces (CDF) Gen Katumba Wamala would have been apprehended already.

This week on Tuesday, four armed masked men riding on motorcycles shot at Katumba's vehicle at least 56 times, killing on the spot his daughter, Brenda Nantongo and driver Haruna Kayondo. According to Museveni, this shooting by individuals he referred to as pigs showed the poor organization of the police.

“The cameras I put in place did their work," he said. "As you saw the killers were running from one area to another area. Why didn’t the camera center alert all the patrol cars and cause even the unmanned air vehicles to chase and block these killers?"

He added that the police camera managers instead think that the gadgets are only for storing videos for forensic analysis as part of the postmortem of the operation.

Museveni added that despite the availability of security cameras, they are not fully used.

“But as you saw, I told the police that you show the public what the criminals were doing…now the criminals had covered their faces but we shall sort that out,” he explained.

The president said that Katumba’s shooting cannot be compared to previous incidents because the country did not have security cameras then. Katumba’s attack follows several high-profile killings by armed gunmen riding on motorcycles. On September 8, 2018, former Buyende district police commander (DPC) Muhammad Kirumira and a female friend Resty Mbabazi Nalinnya were gunned down near his home in Bulenga.

Earlier on March 17, 2017, unknown gunmen shot dead the former police spokesperson, Andrew Felix Kaweesi, his bodyguard, Kenneth Erau and driver Godfrey Mambewa. The trio was gunned down, a few meters from Kaweesi's home in Kulambiro in Kisaasi, a Kampala suburb.

Kaweesi's assassination followed the murder of former state prosecutor, Joan Kagezi in 2015 and Maj Muhammad Kiggundu in 2016 in a similar style.  In June 2018, unidentified assailants also gunned down the then Arua Municipality member of parliament, Ibrahim Abiriga.

Museveni said although suspects had been arrested for all these murders, they were released by courts, something he said doesn't agree with. Museveni said he will have to talk to the chief justice about the release of murder suspects on bail else they will resort to killing them on spot.

"And a number of them [suspects] were arrested but they were released by the courts on bail. Why somebody who has killed people be released on bail? I cannot understand. Bail for what?! So his lordship the chief justice is here, I will get time and we talk but we can't really watch as these people turn our army into a criminal army. If we keep arresting them and you release them, we shall be killing them [and say] he tried to run away and we killed him, he will not be around to tell the story," Museveni said.

Museveni further said the abandoning of radios in favour of mobile phones for police operations has also led to broken networks in policing with each officer operating independently yet this is not how police work.  He directed police to stop using mobile phones in order to act promptly especially during emergencies.

"These policemen abandoned using radios, I think this was during the regime of [former police boss] Kale [Kayihura]. They abandoned using radios, they are now using mobile phones; hullo, hullo! Now, mobile phones, you talk to only one person. Police don't work like that, police work on a network. It is like a village where you make a dunluu [alarm]. When you make a dunluu, the whole village wakes up. The camera people when they are watching, they see something like that they should shout and say wuuyoo, wuuyoo, wuuyoo [there, there, there]. And then everybody should be hearing, everybody should be on the same level not looking for the DPC who's asleep. No. We don't need DPC, we just need the people on duty, whether the DPC is asleep or not, it's none of our business. The police station must always be open and on radio communicating and everybody should be communicating. If something happens here, the whole system knows," said Museveni.

Museveni also blamed Katumba and Gen Elly Tumwine for delaying the project of installation of digital monitors in every vehicle, motorcycles and boats which he says would ease investigations into such murders.

"Actually, Gen Katumba and Gen Tumwine are the people working on that particular system, the one of digital monitors. And when you try to tamper with it, we see you. They have taken long to implement this plan, this would make it easy to know which piki-piki, which car or which boat on the lake. We shall also introduce it on the lakes so that we know which boats are where on the lake," he said.

Museveni maintains that the country is secure and that culprits in the recent shooting would be arrested because they already have good leads.

“The criminality around Kampala is being defeated," said Museveni. "The only element to get rid- of is the corruption and poor procedures within the police. NRM people were reporting intimidation and harassment by terrorists at the police post, these good-for-nothing characters would tell them that there is no political desk. If you do not have a desk for terrorism in your police post…you will go home and somebody else will do the job.”

Meanwhile, Museveni's address was poorly attended by legislators with most of the seats seen empty. URN later learnt that Covid-19 results for several MPs were delayed and they were not allowed to access Kololo for the event.

The few opposition MPs who attended the event displayed papers with texts ‘Free Our People’ as soon as Museveni started his speech. This was in demand of the release of several supporters of the National Unity Platform (NUP) who were arrested during the campaign period and still locked up in prison.

The silent demonstration did not last long as the legislators put down their written texts a few minutes into Museveni’s speech.

Earlier, the speaker of parliament Jacob Oulanyah warned legislators that the president’s State of the Nation Address is supposed to be heard in silence and only to be debated at a later date.

12
+1 #11 ugthinker 2021-06-06 11:44
Everyone else is to blame about everything apart from Museveni!
Report to administrator
+2 #12 Zaitun 2021-06-06 15:45
"Good-for-nothing' police officers, failing to use modern technologies and tools are to blame for the increased criminality in the country, President Yoweri Museveni has said."

It was the swines last time but this time the police officers! Why is this old man very annoyed to the point of blaming his dear officers?

The response is simple: since these guys failed to accomplish his wish and, if they happen to be arrested, there stand a high risk of denouncing the man, the real manipulator behind all these killings of innocent Ugandans.

The fact that the killers are hidding somewhere but risk escaping to another country where they can sell put their stories is now troubling does not give this rogue a minute of rest.
Report to administrator
+2 #13 Jama 2021-06-06 22:36
A President who says that suspects released by the court must be killed . He goes further advising the murderers to lie that evasion should be advanced as the reason for their victim' s death.

Such a speech indicates how our president doesn't have any sympathy for human life and has no consideration for the presumption of innocence by the suspects.