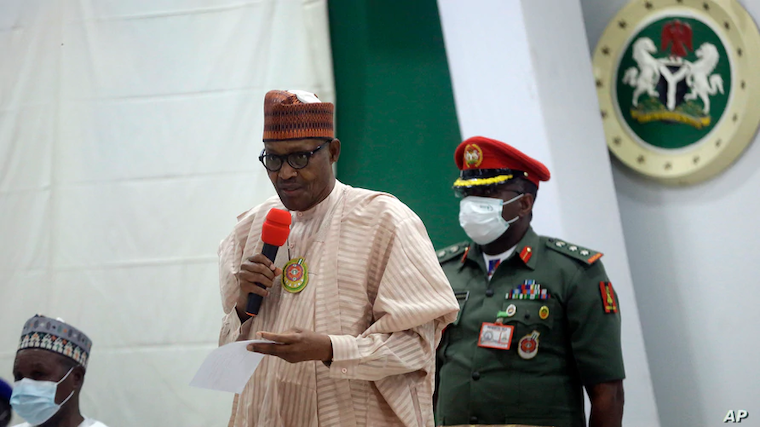 In a series of tweets sent out earlier Wednesday, Buhari, who served in the army during the 1967-1970 civil war, said that regional secessionists did not remember the tragedy of the war, using language that Twitter flagged as “abusive.”

"Many of those misbehaving today are too young to be aware of the destruction and loss of lives that occurred during the Nigerian Civil War," his now-deleted tweet said. "Those of us in the fields for 30 months, who went through the war, will treat them in the language they understand."

A similar comment, in a video clip, remained on the Nigerian presidency’s Twitter account. The civil war left over one million people dead. Buhari’s office responded to Twitter’s action by saying the president had a right to denounce violence.

"If Mr. President anywhere in the world feels very bad and concerned about a situation, he is free to express such views,” Nigeria's Information minister Lai Mohammed told reporters.

Buhari’s comments follow increased attacks, particularly on government buildings and police stations in southeastern Nigeria, in recent weeks. Authorities have blamed separatist group the Indigenous People of Biafra (IPOB) for the attacks. The banned IPOB, which has pushed for a separate Igbo state, has denied involvement.

The key lesson is that when the rich, connected and leaders of a country turn to thieves, misleaders and murderers those led reach a satiety point at which they no longer care or want to know about the problems of their leaders but are seeking for better whatever the methods used.
Report to administrator