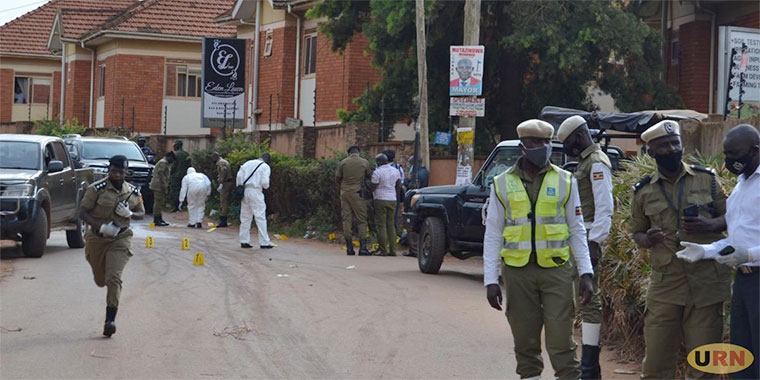 Security comb for evidence at the crime scene

Security personnel from the joint intelligence and operations teams believe that assassins who riddled Gen Edward Katumba Wamala’s military vehicle with bullets on Tuesday morning are still hiding within Bukoto and Ntinda areas.

Gen Katumba was attacked along Kisota road by gunmen riding on motorcycles in an assassination attempt that claimed the life of his daughter Brenda Nantongo and his driver Haruna Kayondo.

Security personnel who spoke to URN said that seven CCTV footages including three from private homes along Kisota road show how attackers shot at Katumba’s vehicle and how they left the scene. The whole incident lasted 11 minutes as recorded by security cameras.

The CCTV clip released by police on Tuesday afternoon shows the suspected killers joining Kisota-Bukoto road junction at 9 am. They proceeded to Bukoto and branched off at Oryx Energies taking the upward route where the CCTV cameras could no longer see their movements.

URN understands that personnel at CCTV command centre at Naguru police headquarters which also houses the National Security Taskforce were told to retrieve all footage captured in Bukoto and Ntinda areas. Security after reviewing the footage for several hours have concluded that the assailants did not go beyond Bukoto.

“All cameras on Bukoto-Kisaasi, Kira–Ntinda, Ntinda-Kigoowa and Kiwatule and others did not capture these motorcycles going through Bukoto or Ntinda areas. This gives us hope that they are still hiding within Bukoto or they abandoned their motorcycles in Bukoto areas,” a senior security source said.

With the hope that the suspects did not go through Bukoto or Ntinda using their motorcycles, security have reportedly deployed dozens of covert intelligence and operations teams ready to faceoff with the alleged shooters.

URN has seen pictures of two cars that allegedly surveyed the area minutes before the arrival of Katumba’s car. One car was captured four times moving within the Bukoto-Kisaasi and Kisota road axis between 7 am to 9 am.

“We have extracted the images of these cars and motorcycles. We have positioned these pictures in our CCTV system for automated alert in case they are sighted anywhere. We have gathered more than enough information from locals who show these cars seemingly surveying the area,” sources added.

Besides the full-time CCTV monitoring of Bukoto and Ntinda areas, security sources are also planning to cordon off the area and conduct a house to house search in already identified zones. Sources also added that motorcycles bearing features of those recorded by CCTVs have already been picked.

Deputy Inspector General of Police Maj Gen Paul Lokech in a statement said Katumba was attacked between 8:47 am and 8-58 am. He was moving a Toyota Land Cruiser Registration number H4DF2138.

As I noted before , the guns that were used in this particular assassination have been used before. At least we know that Kaweesi and Kiggundu and Abiriga were murdered by these special type of guns.

These are special close combant guns from Israel.
Usual criminals have no access to these types of guns. Not even ordinary soldiers get to use these guns.

You can be sure that there are some people sitting somewhere trying to create an impression that there is a serious investigation going on.
One of the methods is to throw in various theories , including giving conflicting eye-witness discriptions of what took place.

Read and study how they did it when Dr. Kayiira was murdered....
Report to administrator
+3 #22 M!K! 2021-06-03 20:15
@Sebunya, the assassins are well trained, well connected and informed. But like all criminals they appear to have left behind a lot of clues that can be used to track them down.

Somebody in the public can identify some some of them from that CCTV footage. However, in Uganda it is dangerous to do so because of the overlap between criminals and the so-called security apparatus.

The assassins, though riding rode on motor, use the same methods employed by gunmen who prowl Ugandan roads in so called drones kidnapping, shooting to main or even killing people on on behalf of the state!

How about the fact that confessed criminal/ serial killers like the infmaous 'Kiface' Sobi or the Kazaura gang (they confessed to over 20 murders!) are now working for the state either as excecutioners or torture gurus in the regime run illegal prisons/death chambers sarcastically called safe houses? Just imagine if you end up in one of them (and anyone can) and Sobi suspects you ratted on him one day!
Report to administrator
+1 #23 M!K! 2021-06-03 20:32
@Sebunya Sobi especially gave television interviews bragging about his exploits.

And for these he said he had even got to meet and break bread with none other than President Museveni himself! "I am now working for team Yoweri".

Those are serial killer Sobi's own words! Kazaura himself during one of him many arrests everytime a body of one his victims had been discovered, is famously alleged to have asked the people arresting him why they were wasting his time or even theirs!

Ugandan today is no different from Italy when the Mafia was at the height of its power and completely merged with the ruling criminals then.

Everybody knew who was committing the crime, but everybody knew better to keep quiet. Talking was a certain death sentence. So, even General Katumba himself should never be surprised if one day he finds out that he is on the same 'Team Yoweri' as these guys.

They may be on another team now, by chances are they may be co-opted to 'Team Yoweri' if ever found. Sobi told us.
Report to administrator
0 #24 Wainanchi 2021-06-03 21:37
Usual thugs write and comment everything about anti government activities and they rejoice if someone of that kind is attackedm

However ,I just want to ask young Ugandan readers to ask their elders what was happening before Museveni win and set up NRM goverentm
Let's remind us all Killings andcrsoings were order of the day by undisciplined soldiers of Obote and Tito Okello

After M7 took over that never or rarely happened. Now that there is peace and progress foreigners who dislike M7 and NRM goverennt are trying to destabilize Uganda by attacking it's strongest point Uganda People's Defence Force.But they are wrong And they made big mistake , that will not happen

However we see upsurge of foreign involvement first by supporting Bibi Pig and making chaos and now targeting top military cadres.Ut us interesting that this didnot happen during Trump Administration but it is reoccuring with Sleepy Joe Biden who cannot climb the plane but stumbles ....
Report to administrator
0 #25 David 2021-06-03 22:52
But why alert the criminals of your intentions to cordon tthe area. Why dont you surprise them.
Report to administrator
+2 #26 M!K! 2021-06-04 02:27
@wainanchi, the breakdown of law is a result of the merger between crime and government under President Museveni.

And the blame lands squarely on Mr. Museveni's feet. Otherwise, how can one explain that Mr. Museveni can meet and break bread with self confessed murders like Sobi Kiface? (Mr. Museveni has never disowned Sobi!).

How can it be that the Sobi cast of Mr. Museveni's 'new' friends run some of the most notorious illegal prisons?

In these safehouses, the Sobis pee on you, make you eat your excrement, gorge your eyes out, pluck out your teeth or nails with pliers (magalo), break fingers or suspend weights on your testicles if you end up in one of those safehouses!

What has Joe Biden got to do with things like this? The gunmen who tried to kill General Katumba Wamala, for whatever reason or on whoever's behalf, if by any chance they get caught, may end up manning a drone with license to kidnap, crack open skulls or kill for 'Team Yoweri. That is Uganda's tragedy.
Report to administrator
-1 #27 Wainanchi 2021-06-04 12:23
M!K!I...Strange you didnot read about senior US diplomat in Kampala and his ugly photo accused of supporting Kabobi Swine.

This thug could not have dobri it without approval of Sleepy Joe or did he get bypass instruction from Langley bypassing SleroybJoe who stole elections. Hmmm???
Report to administrator
+1 #28 Lakwena 2021-06-04 15:46
Quoting Wainanchi:

However ,I just want to ask young Ugandan readers to ask their elders what was happening before Museveni win and set up NRM goverentm
Let's remind us all Killings andcrsoings were order of the day by undisciplined soldiers of Obote and Tito Okello ....

But Wainainchi, do not forget that: you and Gen Tibuhaburwa were anti government and still is. Because e.g. of your Guerilla tactic of defeating Kadaga.

It was not Obote or Tito Lutwa who ordered the Nov 26th 2016 massacre in Kasese. It was not the UNLA who massacred innocent Ugandans on the streets of Kampala between 18 and 19th November 2020.
Report to administrator
+1 #29 Lakwena 2021-06-04 15:47
It was not the indiscipline UNLA soldiers who massacred the youths during the Kayunga riot in 2009.

No Sheiks, deputy IGP ASP or Gen Attempted Murder were murdered during Obote and Lutwa's administration. The list is endless.
Report to administrator
0 #30 M!K! 2021-06-04 17:02
@Wainanchi, I did read about those allegations. And they may be true or not. Just like the allegations about the US elections.

I am no expert in diplomatic affairs, and I am no expert on US elections either. But even then, I still don't see what these two issues have to do with the merger between crime and the state in Uganda.

An environment like that makes fighting crime or even solving cases very hard. Can you go to authorities in Uganda to provide information about criminals like the assassins without worrying that this may jeopardize your own life?

Policemen hire out their service weapons to criminals, rival security bosses coach suspects to frame their enemies (the Kayihura-Tumukunde debacle), criminals and state security act and look the same, serial killers break bread with the head of state and then become executioners in state run kidnap centers and much worse.

Can you blame this on Bobi Wine or Joe Biden or even on the rain? Can you get public cooperation with such?
Report to administrator
123