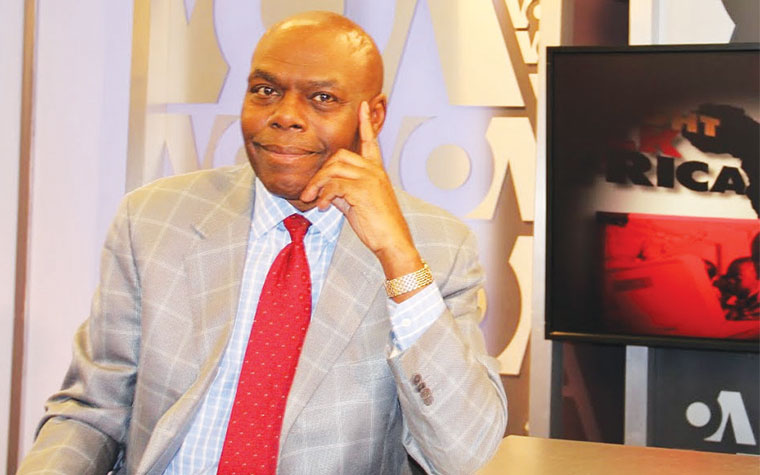 Shaka Ssali is revered in Africa and beyond for his masterful way of bringing the African agenda to the world stage through his high-profile interviews on Voice of America (VOA).

Fleeing Uganda in 1976, “the Kabale kid” born Mike Mushakamba Ssali to Joyce and John Wilson Mushakamba started out as a co-host of Africa World Tonight, before VOA entrusted him with Straight Talk Africa in August 2000, a platform that has made him a legend in journalism.

His signature “I’m profoundly-honoured and exceedingly-humbled” at the beginning of each program was a mantra he reportedly picked from former Zambian president Dr Kenneth Kaunda.

He started his humble journey in the hills of Kabale as a pupil at Kikungiri primary school, before joining Kigezi High School and later dropping out of school, only to bounce back and high. His is a story of hope and humility despite the great heights he has achieved, as one of his friends and protégés, Julius Mucunguzi, writes: sometime in 2010, I was in a fresh produce market outside Dar es Salaam, Tanzania to buy some avocadoes, when I received a telephone call from Shaka Ssali, the really retired Ugandan-American broadcaster at the Voice of America.

When the call came through, I stepped to the side of one of the market stalls to pick it and responded loudly by mentioning his name: “Ndugu Shaka, how are you today?”

“I am terrific,” he responded. Because I was near the owner of the stall, he could hear the echoes of Shaka’s booming voice.
“Are you speaking to Shaka Ssali of VOA?” the man interrupted me.
“Yes, it is him I am talking to,” I replied. Wow. The man got too excited.

I paused and requested Shaka to say hello to this unlikely fan of his. Shaka obliged. The two spoke in Kiswahili, and I could see the man literally glowing with joy and happiness. When he handed the phone back to me and we completed the conversation, the man in the market offered to give me two additional avocados, for free, because of my knowledge of Shaka.

“You have made my day,” the man told me. “You have enabled me to speak to my icon, I will never forget this day!”

Such is the effect of this humble journalist from the rolling hills of Kabale, on the rest of the world. On another occasion, I was checking into a hotel in Abuja, Nigeria and negotiating for a discount without success. Then Shaka Ssali came on the TV screen in the lobby to introduce his Straight Talk Africa program. The entire hotel lobby turned their eyes to the TV screen. Even the guys at the check-in desk glued their eyes to the TV.

I then told them: “That is my friend. I know him personally.” They did not believe me.

I brought out my phone and showed them a photo of myself and Shaka, taken many years ago when I was an intern in Washington DC. On seeing the photo, the conversation changed and I ended up with a good discount, a better location of the room, for my stay at the iconic Transcorp Hilton hotel in Abuja.

These are just two examples that demonstrate Shaka Ssali’s reach and admiration across the African continent, thanks to the reputation he has built during his last 29 years as a journalist and talk show host on Voice of America.

After close to three decades, the Ugandan-born American citizen, who prefers to call himself ‘the Kabale kid’, recently announced he was hanging up his boots and microphone at the studios and going into retirement at the end of May 2021.

In his years as a broadcaster, Shaka Ssali, often says that he dropped out of secondary school in the 1960s and ended up in the Uganda Army as a paratrooper, before fleeing Idi Amin’s regime in 1976. That is how he ended up in the USA, where he has mentored many journalists in Uganda and the continent at large.

When he arrived in the USA, he went back to school, studied for a bachelor’s degree, a master’s degree and crowned it with a PhD in Cross-Cultural Communications at the prestigious University of California in Los Angeles.

So, when one day he came to speak to our journalism class at Makerere University in 1997 and told us to always keep hope alive, he was truly speaking from experience and we believed him when he told us his journey – a school dropout that ended up attaining a PhD and working at one of the leading global broadcasters in the world, the VOA.

I remember that day while at Makerere, Shaka Ssali told us prophetically: “I know that some of you will be in the USA soon, and will call me to say ‘I am in downtown Washington DC, can we have a drink?”

Indeed, after graduating from Makerere University’s Mass Communications class in March 2000, I got a scholarship for an internship at the Family Research Council, a public policy institute in Washington DC. On arrival at the Ellipse Apartments in Fairfax Virginia, I looked up Shaka’s telephone contact and called and told him: “Shaka, I am in Virginia, can we have some coffee?” After introducing myself as one of the students he had addressed during his visit at Makerere University, he asked me for the post code, the address of my location.

Within one hour, the Kabale kid arrived in a customized Mercedes Benz with number plates that read “NDUGU”. He picked me up and drove me to his residence across the Potomac River where we roasted goat, ate and drank some fine wine, and spoke Rukiga.

The following week, he invited me to the VOA studios, specifically to Studio 54 where the Africa World Tonight program was produced. He took me around the building, introducing me to his colleagues.

During that tour, we met the boss of VOA, Sam Ungur, Senior Producer Greg Pirio, and a Kenyan lady called Uduak Amimo. All the three spoke highly of Shaka. He then proudly introduced me as one of the people he had mentored. And he was right. My decision to study and practice journalism was in many ways influenced by Shaka Ssali.

While in high school at Kigezi High School in Kabale in 1995, Shaka had come, again, to motivate and give career guidance to students at our school. As an old boy of the school, he was invited by our then deputy head teacher, the late John Birihanze. I remember sitting in the school main hall and listening to Shaka tell us about the story of resilience and hard work.

“Always aim to be number one,” he said. “Because as you know, in a football game, when the final whistle is blown, all the lights and cameras go to the winning team.”
Watching him in his matching blue jeans and cap, with cowboy boots, I told myself: “I must become a journalist when I grow up.”

Back to Washington DC

When the first edition of Straight Talk Africa program was launched in August 2000, I was most honoured to be one of its first guests, joining the show live from Philadelphia, Pennsylvania, where I was attending the Republican National Convention that nominated George W. Bush as its presidential candidate. It was my first appearance on a global media platform. It in many ways boosted my profile and confidence.

When I returned to Uganda after my internship, I was pleased to learn from my father that they had listened to me on Voice of Kigezi, where Straight Talk Africa program was relayed.

Throughout his career at VOA, Shaka has been a true face and voice of Africa in those studios and corridors of power. His calm and respectful demeanor while interviewing his guests, giving them a chance to explain themselves, but not letting them off the hook when they made claims that did not add up, has been truly a classic case study of good interviewing techniques for journalism students and practitioners.

His authentic African accent that he retained even after living and working in the USA for decades, is seen by many as a sign of confidence in one’s skin; we see some people adopting fake accents after spending just a few months in the USA and Europe. Or even in China and the Arab world.

Even with his many accomplishments of dining and wining with world leaders and hosting them on his show, Shaka remained absolutely authentic and humble. He welcomed many Ugandans and other Africans to the VOA, from students to members of parliament and ordinary folks that happened to be in Washington DC.

Often, the Kabale kid would end the tour with a treat to lunch or dinner at a Swahili Restaurant in Washington DC or a Mexican Grill in Silver Spring. We salute Shaka for the great work at VOA and for always calling on us to “Keep the African Hope Alive”. “To Get Better, Not Bitter”.

Enjoy your next phase in life, my friend, and keep inspiring us!

Julius Mucunguzi is an advisor and head of Communications at the Office of the Prime Minister and was for a decade a Communications expert at the Commonwealth Secretariat in London.

There are many other Uganda born journalists in the USA who keep low profile and do better jobs than that dude.
Report to administrator
-3 #2 WADADA rogers 2021-06-03 12:39
I think Shaka Ssali, with all due respect is over rated too, i think because he has been doing it for voice of Africa but who said they recruit the best, there is nothing special about Shaka and i personally find his skills wnating, i find the likes of Maurice Ocol and Sabiti far better, intelligent and all round journalist.
Report to administrator
+5 #3 sula 2021-06-03 12:53
1- Julius , I have met Shaka too, both on Air and in private , i agree with all your compliments to Shaka but I believe you have fogotten One very important attribute : - Regardless of the many years he has spent in America and the 'good life'' he has lived ----- SHAKA REMAINED A UGANDAN. - The guy just loves his motherland.
Report to administrator
-3 #4 Kalemera 2021-06-03 15:39
Honest question; who watches Shaka Ssali? Let the writer name just two dedicated viewers.

I've watched one or two episodes. The guy is stiff, doesn't prepare well, and generally boring. There is nothing SPECIAL about his show. And it's on VOA, for god's sake, a station NO ONE anywhere watches.

But of course Julius Mucunguzi has to come up with false praise for his fellow Mukiga.
Report to administrator