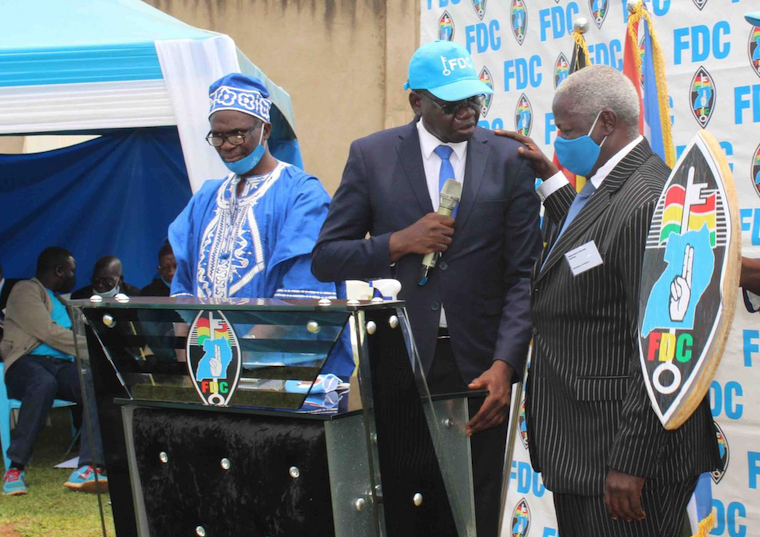 Publicly, without mentioning names or dropping pointers, President Museveni subtly admits he is talking and working with some opposition people but privately, insider sources say, he has built nothing less than an empire of followers within the opposition.

On May 24, the ruling NRM muscled through parliament their choices for Speaker Jacob Oulanyah and his deputy Anita Annet Among with jubilant celebration after beating off stiff challenge from the opposition-backed former speaker Rebecca Kadaga.

Speaking in the immediate aftermath of that victory, at Kololo Ceremonial Grounds, President Yoweri Museveni revealed that
he was on good talking terms with two grand old opposition political parties; the Democratic Party and Uganda People’s Congress.

He said that he has also started talking to some people within the Forum for Democratic Change, FDC, which before the January 14, 2021 general election, was the biggest opposition party in parliament. Museveni added that the only party, which is still elusive, was the Robert Kyagulanyi-led National Unity Platform-NUP, now the biggest opposition party in parliament.

Museveni’s revelation jolted some FDC members who wondered how deep the NRM chairman had infiltrated their party. However, to some insiders, Museveni’s announcement didn’t come as a surprise. According to highly placed sources at the Najjanankumbi-based party, tensions within the party hierarchy have been bubbling for months, triggered largely by allegations that some top-tier officials are clandestinely dealing with President Museveni.

Dr Kizza Besigye, the founding president and four-time presidential candidate, is said to be very unhappy with the way the party is being run. Our sources said that towards this year’s general election, two high-level party officials separately met with President Museveni to discuss the election.

One party official reportedly asked the president to bankroll the party’s participation in the general election.

“The president agreed to give him money but he said he will send it through someone [name withheld]. Actually the money came and it’s from it that you saw the party buying those big brand new cars that were used in the campaign,” the source said.

Eventually, other top-tier officials including Besigye got to know that money had changed hands. Besigye is said to be very disappointed with the current party leadership. The source said Besigye’s initial angry reaction was to publicly denounce the dealings.

“He felt betrayed; he said it was important to rescue the party from what he called businessmen,” the source said.

However, the timing was bad for such a public denunciation, according to our source. The party was still recovering from months of negative publicity triggered by the defection of a number of MPs and the emergence of Kyagulanyi aka Bobi Wine as the most formidable political challenger to Museveni.

The last thing the party needed, according to our source, was another self-inflicted crisis. With the intervention of trusted allies, the source said, Besigye was soothed out of speaking publicly against the implicated party leadership. However, he vowed never to play any active role in the campaigns.

“It’s true Besigye is very cautious about Covid-19 but it’s not the reason he stayed away from Amuriat’s campaigns. He just simply couldn’t take part in a campaign sponsored by Museveni,” the source said.

Besigye joined Amuriat twice; during the FDC manifesto launch in Hoima district and when he campaigned in Rukungiri district.

Even at last month’s induction of members of parliament who were elected on the FDC ticket, Besigye was a noticeable absentee yet he was in the country.

“Do you think there was nothing Besigye could tell those MPs... he has just chosen to stay away because his relationship with some of the leaders in the party has really deteriorated. Don’t be surprised if he supports another person other than Amuriat in the coming party election,” the source said.

Besigye supported Patrick Amuriat in the 2017 party election that ousted the then president Maj. Gen Mugisha Muntu. Elections for new leaders were supposed to be held last year but were shelved for another three years because of Covid-19 pandemic. It was impossible to interview Amuriat for this story. He neither picked nor returned our calls.

Interviewed for this story, Ssemujju Ibrahim Nganda, the party spokesperson, said there has never been a party resolution to work with Museveni.

“I sit on all party organs and not once has a decision been taken to work with Museveni. If anyone is dealing with him, he/
she is doing so in his or her personal capacity,” Ssemujju, the MP for Kira municipality, said.

In response to our questions put to him through WhatsApp, Dr Besigye said he was sure Museveni never funded the FDC presidential candidate. In fact, Besigye said, Amuriat ran the most poorly funded presidential race that FDC has ever had.

“For the most part, he had no public address system and was using the hand-held loudspeaker - mukalakasa. He had to do with a very thin support team that hardly had any basic facilitation,” Besigye said.

The retired colonel said if indeed Amuriat was a friendly presidential candidate, he would not have exposed Museveni’s use of crude violence and harassment of opponents as he did.

“You should revisit his campaign trail and see what he went through,” Besigye said.

The other reason the four-time presidential candidate stayed away from the campaign trail was his strong conviction that the election outcome was predetermined by the state and the campaigns and electoral process was just intended to legitimize that fraud.

“I preferred to engage differently and quietly,” Besigye said.

He, however, conceded that President Museveni has infiltrated FDC just like he has done with all other parties. This, Besigye said, has been ongoing since the party was formed and only escalates towards elections.

He, however, added that despite buying off some leaders, the opposition against President Museveni countrywide is growing with more reliable and determined leaders emerging as others defect.

“I am personally, not discouraged; in fact, my optimism about the impending success of a people’s revolution intensifies. Now that the phase of “office seekers” is over, the real struggle of our people is going to get more focused and intensified,’ Besigye said.

After the 2016 general elections that Besigye and the FDC dismissed as rigged, there were attempts at mediation between
FDC and the NRM. The talks were midwifed by the Women Situation Room with support from the Swedish government.

However, after the tension that had been created by the arrest and detention of Dr Besigye ebbed, the talks suffered a stillbirth.

+6 #1 PaulM 2021-06-02 07:31
The way POA, Nandala Mafabi and Salaam Musumba were fighting against opposition unity, there is no doubt that they are on M7s payroll
Report to administrator
+7 #2 Apollo Ekelot 2021-06-02 09:55
There is a lot of truth in the article. For example, how can one explain Salamu Musumba's stubborn duel against Kadaga.

She must have been on a mission bankrolled by a good 'investor' Not sure about Amuriat, given the way he was treated maybe he conceded due to the treatment he got.

Who knows. How about people like Ingrid Turinawe who virtually never hid her 'love' for Museveni given what she called her 'betrayal' by FDC? Museveni is an experienced hand at underhand methods, only persons with integrity survice!
Report to administrator
-1 #3 Lakwena 2021-06-02 10:04
Since being in power for our "Problem of Africa", Gen Tibuhaburwa is a matter of life and death, it has to be a recourse to hook or crook to sustain it.

The problem here is not necessarily the opposition that is compromised (Bribed). But the criminality and abuse of public office and resources, by a president who has been illegitimately in power for the last 36 years and counting.

Otherwise, except for being an inherent and irredeemable criminal; among others, how else can a decent head of state constantly make reference to using Guerilla Tactics (a crime of subversion) to e.g. defeat Hon Kadaga during the Speakership race?
Report to administrator
-1 #4 Lakwena 2021-06-02 10:14
True to what he said in Masindi on 26th January 2017, that he is nobody's servant nor employee; including commissioning killing/massacre (Kasese), Gen Tibuhaburwa uses anything, everything (bribing) and everybody to fight for himself, family and belief (vanity).
Report to administrator
+2 #5 WADADA rogers 2021-06-02 11:18
I have said it before and I will say it again that Museveni has mastered the art of buying off members of the opposition and either bankrolled them to spy or taken them out of FDC to join NRM.

He has realized that many of these guys are desperate for money and leadership positions.

As for UPC and DP, those are annexes of NRM. Within FDC and NUP, he must have picked a few whose duty is to spy and report back. Besigye must have realised that he people he left behind sold the party
Report to administrator
+3 #6 eric L 2021-06-02 13:23
Quoting Apollo Ekelot:

There is a lot of truth in the article. For example, how can one explain Salamu Musumba's stubborn duel against Kadaga. Not sure about Amuriat, given the way he was treated maybe he conceded due to the treatment he got.

Why do you easily find Musumba, Nandala and Turinawe culpable but fail to see the sheer lack of leadership control or the oblivious absence of POA in the right spaces to the extent that an amount that is capable of buying 1,2,3 and more vehicles without very clear explanations to the ssource(s). MM has been vindicated, and am so happy for him.
Report to administrator
+1 #7 Lutaaya Michael 2021-06-02 15:45
Every leader at FDC is compromised.

Most of the Opposition parties are poor and can't fund their daily run activities on a daily budget. They need a budget with they don't have and they end up being easily compromised by NRM.

The Download of Kizza Besigye equally led to the downfall of FDC because all the grassroots of FDC were laid on Besigye.

Lastly, FDC and NRM are children of the the same clan were by one children was neglected by the father but stil it is believed that the Father owns the child according to the law.!
Report to administrator
0 #8 kabayekka 2021-06-02 22:11
One can just wonder which democratic country is it there in this modern world, where one finds a democratically elected leader that stays put for re-election for 40 years?

Most probably Iraq where there was even a parliament and regular national democratic elections during the rule of Saddam Hussein. This democratic rule unfortunately lasted 24 years. From 1979 to 2003!
Report to administrator
+1 #9 Apollo Ekelot 2021-06-02 22:13
Mukulu Ekelot be honest in this case much as it involves your village-mate, Okoboi.

Why do you easily find Musumba, Nandala and Turinawe culpable but fail to see the sheer lack of leadership control or the oblivious absence of POA in the right spaces to the extent that an amount that is capable of buying 1,2,3 and more vehicles without very clear explanations to the ssource(s). MM has been vindicated, and am so happy for him.

Oh Eric, I hadn't seen it from that perspective; I should have known that someone was going to defectively bring the tribal angle!

Besigye shares my view though and by the way, any reason why he was treated so shabily!
Report to administrator
0 #10 WADADA rogers 2021-06-03 12:59
Before NUP was born, museveni had made it known that by 2021, there would be no opposition in Uganda, i think he said so having secured the rest of the political parties like UPC, DP, FDC, Betty Kamya's Federal Alliance party among others to his side.

Sadly, NUP was born unexpectedly and Bobi rose up and later won the majority in parliament, M7 cant do much for Bobi wine because the international community is watching
Report to administrator