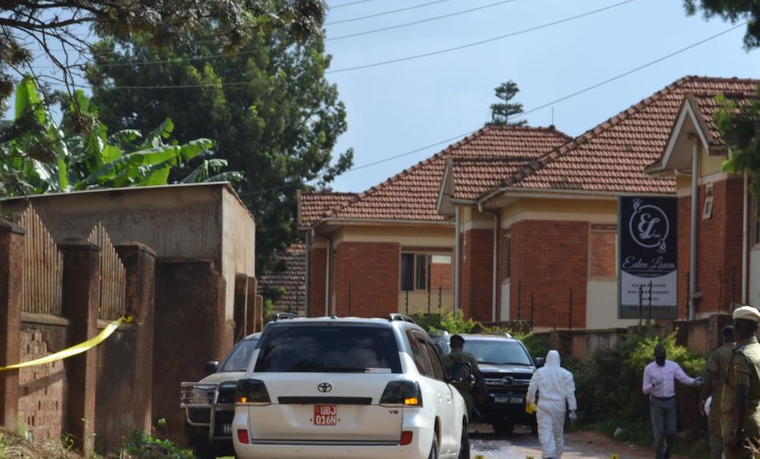 Security vehicles and officers trampling all over  the scene of crime

It took police more than 2 and half hours to safely secure and seal off the scene of crime, where the former chief of defence forces and outgoing Works minister, Gen Edward Katumba Wamala was attacked by four gunmen who killed his daughter and driver.
Masked gunmen sprayed Katumba's vehicle with bullets on Tuesday morning along Kisota road in Kisasi, killing on the spot his daughter Brenda Wamala Nantongo, and driver Haruna Kayondo. Although police arrived at the scene about 30 minutes after the shooting, the scene of crime was never secured - with police failing to control the growing crowds.

Police, like the civilians all first focused on catching a glimpse of the two victims whose bodies were still lying inside the car. By this time, Katumba had been rushed to the nearby Malcolm clinic in Kisaasi. A number of police commanders mostly at the rank of Assistant Superintendent of Police (ASP) arrived and later ordered for securing of the scene.

A tape covering a length of about 30 metres was erected to cordon off the scene. However, uninformed and ununiformed security personnel kept coming in and walking straight to the crime scene. This was before and after the scene of crime officers commonly known as SOCOs had arrived.

When the SOCOs started reconstructing the scene, they saw bullet cartridges in a range of about 80 metres. They then ordered for extension of the cordoned-off area in order to widen the search area.

While the SOCOs were taking pictures and combing the area to capture any possible exhibits that could be of help in tracing for the attackers, security officers in a vehicle bearing a number plate UBJ 016N came in driving at breakneck speed and entered deep inside the already secured area.

SOCOs were seen shaking their heads in disgust and disbelief at what their fellow security men had just done. With the arrival of crime intelligence director Brig Chris Damulira, the scene was again extended after more bullet shells were discovered at a distance of more than 120 metres from the vehicle.

Brig Damulira immediately ordered the military and police vehicles to be removed from the cordoned-off area. WIth Damulira having restored the authpority of police over the scene, civilians and security personnel were directed to move to a farther-off distance in order to give enough space for SOCOs to execute their duties.

The deputy Inspector General of Police, Maj Gen Paul Lokech, arrived at around 11.30 am and also ordered his guards supported by Joint Anti-Terrorism Task Force (JATT) and Counter-Terrorism to further push the onlookers away.

In nutshell, police and sister security agencies once again failed to secure the crime scene - making the same mistakes they did after similar assassinations of AIGP Andrew Kaweesi, Col Ibrahim Abiriga, Maj Muhammad Kiggundu, ASP Muhammad Kirumira where they did not control civilians and themselves from contaminating the crime scenes.

+7 #1 Olum S. 2021-06-02 03:43
What should anyone expect? This is a typical scenario in a first class banana republic where you have a multitude of state militarised organs, flexing their muscles at every opportunity, each feeling they have greater power/authority over the rest.

Meanwhile, the actual police force that would be handling such crimes has been neglected, underfunded and heavily compromised. In place of professional police, you have half-baked Kyankwanzi level cadres. A totally shambolic state of affairs.
Report to administrator
+3 #2 M!K! 2021-06-02 05:33
The observer can be excused for expecting competence from this police force or anything under the yellow bus.

Such expectations are misplaced. The people in charge believe that showmanship and brute force are perfect substitutes for reason, or even the scientific approach.

What did they due during previous similar investigations? They screwed up right from the word go. They contaminated the crime scene, scared off genuine witnesses while creating bogus ones and carried out mass arrests, tortured people for extorted confessions looking for multiple suspects even when in cases where it had stated that the perpetrators were four utmost.

Wait for a repeat of the same random mass and the same con game all over again. What you want to hide from the guys in the yellow bus put in reason and science.

Or under the bus. The bus driver unleashed terror squads on the electorate, on election eve, and later expressed surprise that the cowed people did not choose him the next day.
Report to administrator
0 #3 Ensi eno!! 2021-06-02 07:37
God help Uganda!
Report to administrator
0 #4 WADADA rogers 2021-06-02 09:59
Incompetence is inborn, some times it forms part of some people's training.

securing and taking information from a scene of crime is a very sophisticated method that requires sophisticated people, it requires scientists and people who know how to use advanced technology to know what to pick and what to leave.

However, they are just ordinary soccos from police training school in masindi, what do they know, what can they do.
Report to administrator
+1 #5 Lakwena 2021-06-02 17:47
In other words, why did Gen Tibuhaburwa disband the Special Branch?

It is because, that branch of the Uganda Police was almost omniscience and omnipresent. The Special Branch was the reason Gen Tibuhaburwa resents the the Police, hence his demonizing them as corrupt and branding them Kawukumi.

It was the Special Branch, which often blew his top from and before 1981, when he started his subversive activity, hence the the number of the arrests of his informants and collaborators.

It was the Special Branch, which got him intercepted at a roadblock, arrested and only saved by his bloody step-brother Salim Saleh.

In other words, if the Special Branch still existed and not corrupted, most of the assassinations, including the attempt on Gen Wamala would have been prevented and perpetrators, including Gen Tibuhaburwa would have been directly implicated.
Report to administrator
+1 #6 eric L 2021-06-03 08:47
Everything in a banyampi regime is calculated to hoodwink the gullible.

Even the mistakes and miscommunications are well calculated to give the regime actors advantage for their bad deeds.

The evidence will soon be declared tampered, some Muslims will be persecuted,the president will tell us about pigs and as we forget about this, a fresh one will come up and this will be fully closed and eyes go to the next case.

Oulanya,in a typical kinyampi style already came out to tell us how a body guard had saved Katumba's life yet the same body guard had his principal injured with bullets, his driver and daughter murdered and the BODY GUARD had not even a single scratch nor did he shoot even a hair of the assassins,interesting stuff.
Report to administrator