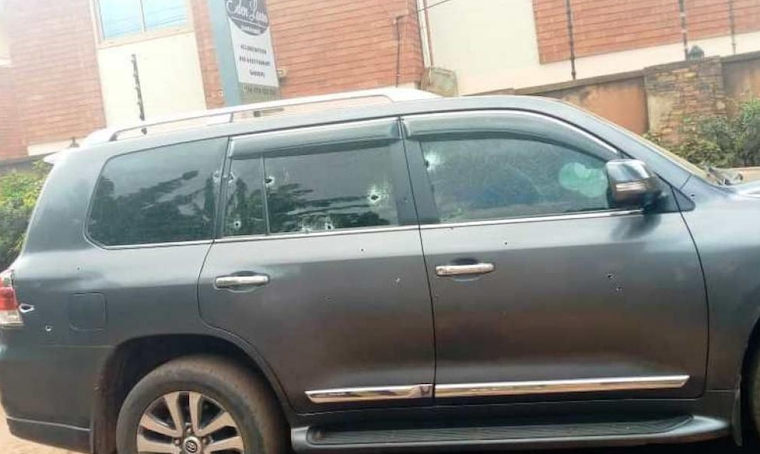 Gen Katumba Wamala's vehicles was sprayed with more than 15 bullets

Unidentified gunmen have shot dead the daughter and bodyguard of the former Transport and Works minister, General Edward Katumba Wamala.

The gunmen today morning at about 9 am intercepted Katumba, who was driving in his vehicle registration number H4DF 2138 along Kisaasi-Kisota road, and sprayed it with bullets.

Eyewitnesses say Katumba’s daughter identified as Brenda Wamala Nantongo and his driver, Haruna Kayondo died on the spot while the general escaped with gunshot wounds in the hands.

The bodies are still in the vehicle that is still at the crime scene, now cordoned off by the detectives in search of clues. Katumba was first rushed to Malcolm Clinic in Kisaasi for first aid before being transferred to Medipal International hospital. Katumba had reportedly like always just bought newspapers from the nearby mosque when he got attacked.

The trio was gunned down, a few meters from Kaweesi's home in Kulambiro in Kisaasi, a Kampala suburb. Kaweesi's assassination followed the nearly a carbon copy murder of former state prosecutor, Joan Kagezi in 2015 and Major Muhammad Kiggundu in 2016.

He can speak for himself (and he always did it better when he debated and argued issues even with his enemies instead of resorting to brute force like he does these days).

Infact too politically naive which serves Museveni perfectly. Just like Elly Tumwine. And he has no active command.

Those who know him attest to the fact that he is not vain or even power hungry like say the Tinyefuzas or the Tumukundes such that Museveni would feel threatened by him.

They say that even when he was actively in command, Katumba was always first and foremost a military officer who was differential to his bosses - Museveni and his brother Salim Saleh, with the latter often credited for his rise through the ranks. We can argue on this, other than issuing threats.
Report to administrator
123