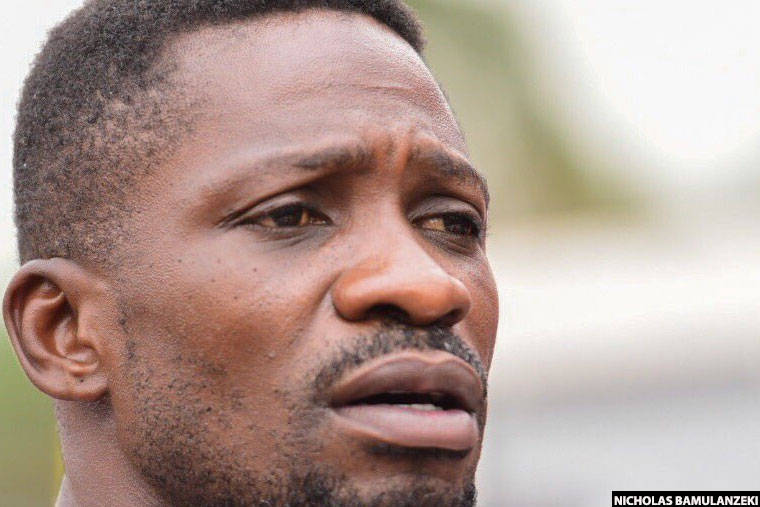 The National Unity Platform (NUP) president, Kyagulanyi Robert Ssentamu aka Bobi Wine’s efforts to meet the leaders of other opposition political parties seem to have met a brick wall.

Last month, Kyagulanyi wrote letters to the presidents of the Forum for Democratic Change (FDC), Alliance for National Transformation (ANT), Democratic Party (DP), and the Justice Forum (Jeema) seeking to pay them a courtesy call but one month down the road, he has only met leaders of only one party.

While Kyagulanyi met Jeema leaders late last month, the party president Asuman Basalirwa stayed away attributing his absence to a prolonged court matter he was handling in the Constitutional court.

Sources however told URN then that many party leaders were disenchanted with Kyagulanyi accusing him of having used and then dumped them. The sources said that during this year’s cycle of elections, Kyagulanyi supported exclusively the candidates of NUP despite the long working relationship he had with Jeema.

This sentiment reverberates across other opposition parties. A source within the FDC told us that Kyagulanyi ran an annihilation campaign during the election and that it would be hard for them to make up now.

“He was working to finish us but we survived and now he says he wants to talk to us; what is there for us to talk about?’ one senior party official said.

However, FDC spokesperson Ssemujju Ibrahim Nganda said as a party, they have never resolved that they will not be working with NUP. Concerning the proposed meeting with NUP leadership, Ssemujju said the reason they turned down the first request was because they wanted to have a full picture of what Kyagulanyi wanted to talk about.

"The FDC received a letter from the Hon. Kyagulanyi, he wants to visit, and FDC asked him 'what do you want us to discuss?' He has actually submitted an agenda to the FDC but the FDC is an institution, that letter is to the president. We'll discuss it as a party and then take a decision. What I know is that the president has communicated formally to the FDC management which is the working committee and NEC because the moment you're an institution you're accountable for all the actions that you do on behalf of the others. It is still under processing and we'll communicate," Ssemujju said.

For ANT, Alice Alaso the acting secretary general said they are ready to meet with any opposition political party because they are fighting for the same goal. She said the party had accepted to meet with Kyagulanyi but there was a clash in the program.

On the day that the ANT had chosen to meet Kyagulanyi, his NUP party had organized a prayer for its members who are still held up in different prisons across the country and those killed in the course of Kyagulanyi’s political journey.

"We'd said it was okay, they'd asked for a meeting on a certain Friday and I had indicated that it would be okay but I think the programme changed, we have not heard from them again. I think the only 'thing' we're not ready to meet is the NRM but anybody in opposition, we're ready because we think we're pursuing a common interest. We disagree with the NRM the way they have run the country and then their track record of keeping their promises is really terrible whether you start from 1985 with the Nairobi agreement or whether you start with the fundamental change," said Alaso.

DP, the biggest victim of NUP as it lost 10 of its MPs in the 10th parliament to the nascent party, Okoler Opio Lo Amanu who speaks for DP said they agreed to meet Kyagulanyi once they clear more pressing issues within their party.

"In as much as the communication was formal on their [NUP] part, we responded informally and we agreed that we're going to meet but we have not yet determined when we can meet. We have a lot of things on our desk but when we find time definitely we shall meet. As long as we have given them our consent definitely that is enough - we made a phone call, if you make a phone call, you respond by text that is courtesy only that we have had a lot of things on our desk as a party and our things take priority than any other meeting. So when we clear off our desk we shall definitely meet the people from NUP," said Opio.

NUP spokesperson Joel Ssenyonyi said the party is still desirous of meeting the leadership of other parties. Ssenyonyi, the Nakawa West MP said although there are some elements within these parties who abhor their rapprochement, the overwhelming majority wants to have a brotherly relationship with them.

"You see the idea is not just one or two meetings. We want to establish a working relationships because we're all interested in change. We want to see how we can combine our energies and efforts in building a relationship. There is obviously willingness, though there might be a few party members or even leaders in some parties who have expressed certain opinions - I hear there is a time Salaamu Musumba said "we can't work with these NUP guys" and so on and so forth but other leaders have reached out to us and said, look those are her views nit the party and the rest of us. So there is willingness from the bulk of the other leaders and members for us to work together and we're happy to do so." he said.

In the 11th parliament that was sworn in last week, NUP wrestled the leadership of the opposition from the FDC which it had held since 2006 when the country returned to multiparty politics. The party got 57 MPs against 32 of the FDC.

Lakwena, thanks.
....
Which fake opposition leader will win in 2126 & HOW, in the fake country owned by migrant Museveni?

Look here: (1) The removal of M7 can be an INTERMEDIATE OBJECTIVE only. Our OVERALL OBJECTIVE should be "WHAT SYSTEM OF GOVERNANCE DO WE REPLACE THE NRM/M7 REGIME WITH?"

That question has not yet been answered by any party in the opposition. Untill then, there is no common end point around which the opposition parties or Ugandans in general can rally around. {Please, do not mount your plough in front of the oxen.

They can pull but they cannot push the plough}. (2) Those who brought in the NRM into power must seek Attonement from those they and M7 whave killed. MATO PUT (the Jo p'Ocol way) is possible.

Jo-Lango have a similar procedure called CUL ME KWOR (in the absence of which become CULO KWOR (which results in the same action as in the cases where mato put has failed).
Report to administrator
0 #12 Akot 2021-05-30 15:28
Quoting WADADA rogers:

I would not blame them for avoiding Kyagulanyi, surely it is hard to tell if he is for them or against them.

Kyagulanyi is playing Museveni's game & consolidating the demon through the fake parliament!

Kyagulanyi wants to replace Museveni, yet doesn't know it's bringing down the divisive tribalistic system the demon so cleaverly put in place that comes FIRST, then him calling Ugandans to UNITY are all that are needed to block Museveni & show him way out!

NUP cannot rally the other opposition parties until it CLARIFIES what it intends to replace NRM with, importantly where it stands on the "Buganda Question",

Kabaka MUST make Buganda position clear as it's part of the Uganda that belongs to Museveni & family!

Either Kabaka help UNITE Ugandans against Museveni or help keep the demon in power & assure the family business!

Once Museveni & family are out of control/ownership of Uganda;

- Independent Tribal States, or
- The Republic of Uganda MUST be Reformed IMMEDIATELY!

Tribal leaders MUST by now know non has control nor free to live on tribal lands because the fake country & riches belong to Museveni & family!
Report to administrator
+1 #14 Akot 2021-05-30 16:00
Quoting kasede:

Buganda [& NUP as well) needs to clarify to the rest of the other Ugandan "Pre- Independence Ancient States" where it stands on the issue of THE BUGANDA QUESTION.

That is the way forward for Uganda...

If Kabaka/Bagandans want to be FREE from the rest of Uganda, then they MUST help UNITE UGANDANS to show Museveni & family way OUT! Then Buganda will do as it wishes after!

Kabaka MUST know Bagandans are safe WITH the rest of tribes, but with Museveni who doesn't care about any tribe & wants to own Uganda formed by tribal lands!

Would Museveni still be in power if Buganda/ Kampala/Entebbe were not in Central?

If kabaka loves Bagandans, want them to live as FREE people, he MUST help UNITE Ugandans to end Museveni & family hold on every tribal land in the fake country!
Report to administrator
0 #15 Akot 2021-05-30 16:12
If Kyagulanyi really loves Uganda & Ugandans, all he has to do are;

- not be part of the fake parliament to blind the world Uganda is a democracy, while he waits for next fake election that will further bolster Museveni, the only winner,

- call tribal leaders to stand down & to UNITY of Ugandans!

These are the only WEAPONS Ugandans need to end Museveni & family hold on their land & riches!

Is there any reason Ugandans wait for 2026 fake election?

The inhuman tribalistic system down NOW & UNITED Ugandans will just have to come out in FULL to block Museveni, as they blocked T.Okello/Acholi!

Which tribal land will migrant Museveni withdraw to fight back from this time & which tribes will join him?
Report to administrator
0 #16 Lakwena 2021-05-31 18:40
Quoting kasede:

[quote name="Akot"]Lakwena, thanks.
.......
Jo-Lango have a similar procedure called CUL ME KWOR (in the absence of which become CULO KWOR (which results in the same action as in the cases where mato put has failed).

But kasede, in the Uganda context, culo kwor, which is "reparation" is a basket case. E.g. Uganda is suppose to culo kwor i DRC;but bankrupt and debt ridden that we have become, culo kwo is an impossibility.