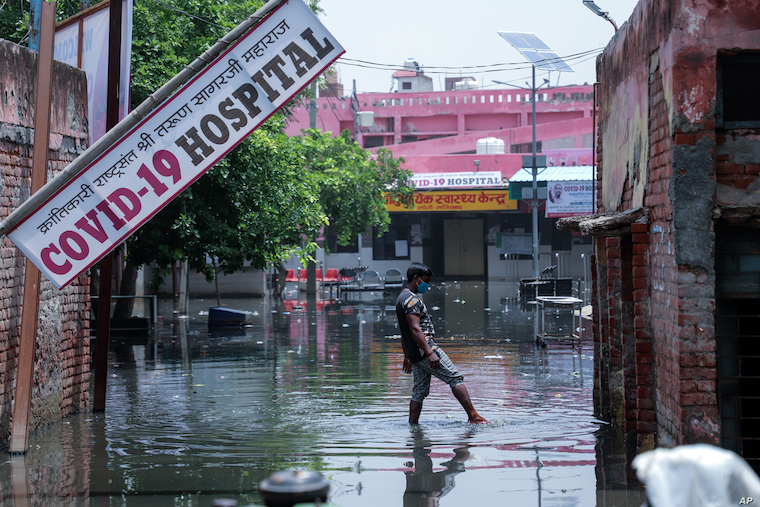 A COVID-19 hospital in India

India is nearing 300,000 recorded deaths from the coronavirus, after adding more than 3,700 deaths in the last 24 hours.

The country reported more than 240,000 new infections Sunday – a number that many believe is an undercount because of limited testing resources.

The Indian government said Saturday that while COVID-19 infections remain high as they spread to overburdened rural areas, the infections are stabilizing in some parts of the country.

While a new variant of the virus first found in India has raised alarm around the world, a new study found Saturday that vaccines by Pfizer and AstraZeneca are effective against it after two doses.

In both cases, the effectiveness was measured two weeks after the second shot and against symptomatic disease. Both vaccines had limited effectiveness after just one dose.

The Kent variant is the dominant strain in England, but health officials fear the Indian strain may outpace it. On Sunday, the Wall Street Journal reported that three scientists from China’s Wuhan Institute of Virology, or WIV, in Wuhan, China were admitted to the hospital in November 2019 – a month before China confirmed its first coronavirus case.

The news, which cites a U.S. intelligence report, came a day before the decision-making body of the World Health Organization is scheduled to meet to discuss the pandemic and will likely add fuel to the theory that the virus may have escaped the laboratory.

The report is not the first to cite the possibility that China had earlier knowledge of the virus. Near the end of the Trump administration, a fact sheet released by the State Department said that "the U.S. government has reason to believe that several researchers inside the WIV became sick in autumn 2019, before the first identified case of the outbreak, with symptoms consistent with both COVID-19 and common seasonal illnesses."

The World Health Assembly will begin Monday and last until June 1.

0 #1 Lovesyou 2021-05-24 21:52
Pls listen to your conscience. Good & others love you, please forsake all, everyone and your life, selling all and giving to the poor, then work for J not $, share the truth of J to all people with others in love, and get vaccinated asap take both doses as only 2 weeks after the 2nd dose you have full vaccination, use a mask with vaccination to protect those without vaccines in case you carry any residue virus in you, Eat and exercise healthy to avoid clots and issues!