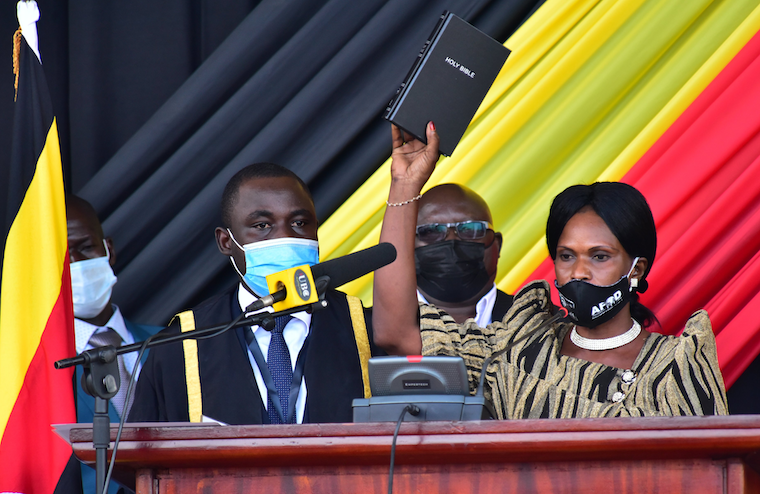 Traffic around parliament has been diverted as the newly elected 527 members of the incoming 11th parliament start to take oath today Monday.

Traffic police commander for Kampala Metropolitan Police (KMP), Norman Musinga in the guidelines issued Saturday said all the MPs-elect who will be heading to parliament for the function, are advised to come with only one vehicle and three persons to avoid congestion.

According to guidelines, police intend to mount some traffic diversions in areas surrounding parliament, like Parliamentary Avenue are cut off at Kimathi Avenue, King George VI street, Siad Barre and UBC roundabout respectively.

The MPs-elect are accessing parliament via King George VI street where they are dropped off at the main gate, and thereafter the motor vehicles proceed to the designated parking at National Theater.

After swearing-in, they will proceed to the parking area via the eastern gate of parliament opposite National Theater and exit through Dewinton road. All motorists unrelated to the function are advised to avoid Kimathi Avenue, Parliamentary Avenue, Siad Barre, and Dewinton roads.

Traffic police has also warned all people that parking along the road or near parliament is prohibited, any abandoned vehicles shall be towed to central police Kampala yard at the owners' cost and inconvenience.

0 #1 WADADA rogers 2021-05-17 13:18
Even the swearing in of mere MPs requires that roads must be closed, will the police do the same when these people start sessions in Parliament.

Why do they make it appear as if swearing in is a very important ceremony.
Report to administrator
0 #2 kabayekka 2021-05-17 22:55
Indeed this sort of political business is presently the most profitable and of high value in the many income generating enterprises formed since 1986.

With this country in high debts, and the poor economic situation mainly caused by the attack of COVID-19 worldwide, who exactly is rich enough in Uganda, able to sponsor such a business for some good five years?
Report to administrator
+1 #3 Akao 2021-05-18 02:13
Useless, how much of economic loss are they making for the swearing in. Are the MPs being sworn on the road?

Why does swearing in of MPs have to affect so many people. What kind of country is this? Asusual, useless government!
Report to administrator