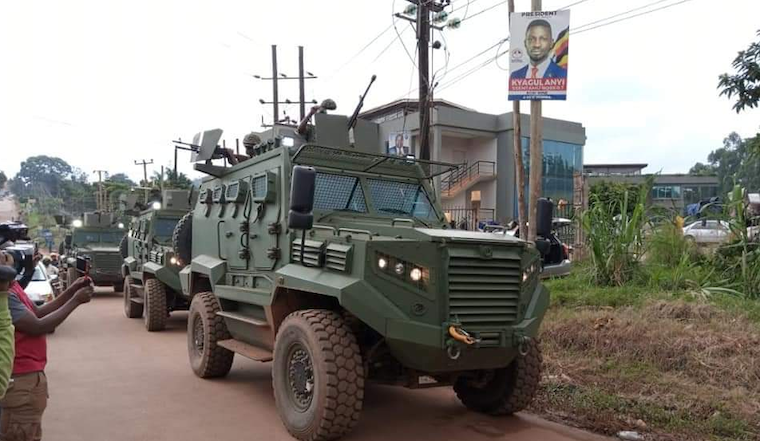 More than 70 people have been detained over allegedly planning to disrupt the swearing-in ceremony of President Yoweri Museveni at Kololo Independence grounds.

Museveni is set take oath today after he was declared winner of the January 14th presidential elections by the Electoral Commission. A senior security officer has intimated to URN that Chieftaincy of Military Intelligence (CMI), Crime Intelligence and Special Forces Command (SFC) has so far arrested 70 people.

The suspects, according to security sources, are being detained in military cells particularly at CMI headquarters in Mbuya and Special Investigations Division (SID) in Kireka, Wakiso district. Police spokesperson, Fred Enanga, had earlier said only 41 people arrested for allegedly planning protests and riots on the inauguration day.

“I want to tell you that we have so far recorded 70 suspects who have been picked up for intending to cause chaos on swearing-in day. Several people were picked up last night [Monday] and more are being hunted and they will be arrested this night,” a source said.

CMI is commanded by Maj Gen Abel Kandiho, SFC is commanded by Museveni’s son Lt Gen Muhoozi Kainerugaba while CI is commanded by Brig Gen Chris Damulira. Col Deo Akiiki, the deputy UPDF spokesperson, said all military elements are at their disposal to help police in ensuring that no one interrupts tomorrow’s swearing-in.

“As we prepare for inauguration and swearing of the president-elect, under our joint security architecture, we have heightened our support to civil authority to ensure the swearing of the new president is secure and safe for any guest. UPDF has put at disposal all its elements to the police,” Col Akiiki said.

Another security source has also revealed that SFC has taken over the hunt for suspects that have continuously thrown petrol bombs at government and private vehicles. Last evening, petrol bombs were thrown at Katwe police station but it was contained before spreading.

Soldiers have been deployed in all major trading centres along Gayaza road. Some of the officers are moving in files on both sides. Because of petrol bomb incidents, the military has also been deployed at some fuel stations in Kampala.

0 #1 Wainanchi 2021-05-13 17:59
Congratulations Uganda security
Flush all rubbish garbage and snakes from Uganda.
Look at this column.

No one dares to say a single word except die hard Musevenist and Uganda patriot aka Wainanvhi.

Long live Yoweri Kaguta Museveni this outstanding kwsder who has made Uganda peaceful ,better place to lrave and constantly developing and upgrading.Lets compare.Uganda with other sister countries ! Do you see what I see?

Down with crooks and haters who spit poison every day in whatever good is done.! They know better?? Hmmmm funny!! They are stooges and losers paid tobdisrupt Uganda and cheat naive foreigners main bazingu who are fools if they trust these pigs
Come on ,bring it in,come to Uganda and see with your own eyes.

Di not trust traitors and paid spies like the far bitch Stella Nyanzi who is sexually frustrated and who is masturvating their fat and ugly ass in nearby Kent and getting fee money to lie and attack Uganda.Lying bitch and cow.
Report to administrator
0 #2 kambarage 2021-05-14 05:16
Hmm...he is already sworn in. Now these ones may be released but they have to first reveal who is leading the petrol bomb throwers for prosecution.

Insolence must end and citizens directed towards working to 'secure their future' instead of wasting time fighting for rich musicians who are using them to get money from the West and sit back to enjoy the fracas.
Report to administrator