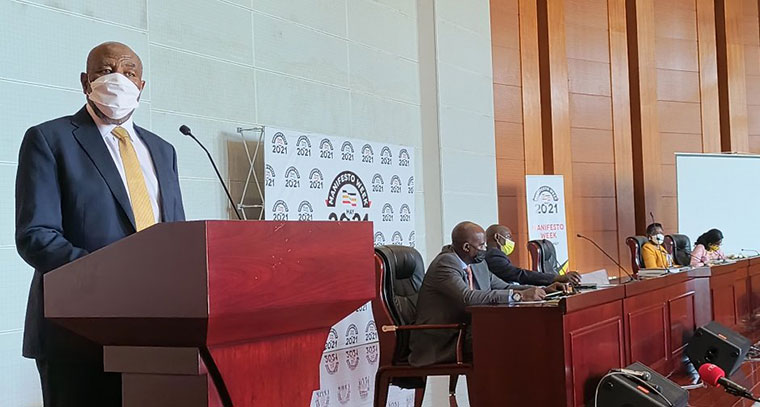 The Manifesto Implementation Unit of the Office of the President organized a week of media interaction dubbed the ‘Manifesto Week May 2021’ from May 4 to May 11, 2021.

The week entailed presentations by different ministries and one government agency (National Planning Authority) on their sector’s respective performance in implementing the NRM Manifesto 2016-2021 and the Strategic Directives and Guidelines for Period 2016-2021.

There were 33 presentations in all; delivered at the Office of the President auditorium except the one for the education and sports sector which was delivered at State House Entebbe.

Willis Bashaasha, the director of the Manifesto Implementation Unit, moderated all the presentations. Presentations were read by either the senior minister or junior minister as a principle of strict accountability protocol. However, after reading the official sector document, other officials like permanent secretary, directors, commissioners or technical staff would be asked by the minister to answer or comment on specific concerns of the media.

The theme for the NRM Manifesto 2016 to 2021 was ‘Steady progress: Taking Uganda to modernity through jobs-creation and inclusive development’.

While the manifesto was prepared and issued by the NRM in party 2020 as it prepared to contest the general elections, the Strategic Directives and Guidelines were prepared and issued by Yoweri Museveni as the newly sworn-in president in 2016. He unveiled them at the inaugural cabinet meeting at State House Entebbe on June 23, 2016. The directives were 15 in number.

The hashtag for the week is #ManifestoWeek21.

Bashaasha repeatedly pointed out that the work on the unit he heads is to track the progress of the manifesto implementation processes and popularize the findings. The unit identifies and compiles all challenges and deficits and forwards them to the concerned ministries, departments and agencies to take appropriate action.

He added that any challenges identified by the sector implementers of the Manifesto Implementation Unit are then carried over to the process of writing the manifesto for the contest for the next term of office.

He said the week serves three major functions. First, it cements the culture of corporate and responsive governance which sits on the foundation of regular accountability.

Secondly, it offers the general public substantial exposure to the government’s activities; concluded, ongoing or planned, and assists the public’s decisions in the upcoming elections.

The various annual sector reports are utilized in the drafting of the next manifesto, thereby contributing to the high probability of electability of the National Resistance Movement (NRM). “The challenges captured in the previous manifesto weeks were captured in the NRM Manifesto 2021-2026,” Bashaasa said.

The manifesto being reported on is the fifth election manifesto of NRM since 1996. At the time of vying for the next term of office, the NRM has put up a well-researched and informed manifesto, with a theme that resonates with the country’s stage of development and experiences.

Thirdly, the manifesto week of the fifth year always acts as a mobilizational build-up towards the swearing in of the new presidency which takes place more or less in the same week. For example, while the manifesto week of 2021 ends on May 11, the president-elect, Gen Yoweri Museveni, will be sworn in the following day on May 12.

THE FORMAT OF PRESENTATION

The respective senior minister or junior minister read out a pre-prepared official document, concurrently being beamed on a digital screen. Then the media asked questions, to which answers were given immediately by official present or noted for further management.

Then the media subsequently disseminated the reports through their print and electronic platforms. The government broadcaster, UBC, broadcast most of the presentations live.

As a common format, each presenting ministry or agency read out their vision, mission and mandate; their specific commitments under the manifesto period; achievements; and challenges met and deficits incurred.

Meanwhile, the prime minister of Uganda, Dr Ruhakana Rugunda, has announced that the government has delivered 95 percent of the commitments made in the NRM Manifesto. This was said at an earlier event to launch of the manifesto implementation and accountability week on Friday, April 30 at the Office of the President auditorium.

“Overall, our assessment of the implementation of the Manifesto commitments to date stands at 95 per cent. I am convinced that with the momentum generated from the start of Kisanja Hakuna Mchezo, the good leadership of H.E the President and the commitment of different actors, Government achieved most of the targets that were set out in the Manifesto,” Rugunda said.

The prime minister, who is the head of government, added that the government initiated a number of reforms in terms of laws, regulations and policies so as to ensure smooth and fast implementation of the manifesto.

He mentioned some of the reforms like the free connections to the national electricity grid, improvements in planning, budgeting, monitoring and reporting, and proposals to amend the Public Procurement and Disposal of Public Assets (PPDA) Act.

Rugunda decried the disruptive impact of corruption and Covid-19 on the overall implementation performance. “Corruption is still with us and this undermines the different efforts invested to achieve our targets.

However, Government is strengthening anti-corruption agencies. The establishment of the Anti-Corruption Unit in State House has reinforced this fight, and this unit is doing a commendable job,” he said.

He is a shadow of his past. Surely what has NRM done for Ugandans to claim a 95% manifesto implementation.

They have hardly fulfilled the hot air that they promised Ugandans in 2016. Before stock taking, they are again at it, repackaging their lies in a different form but with the same content.
Report to administrator