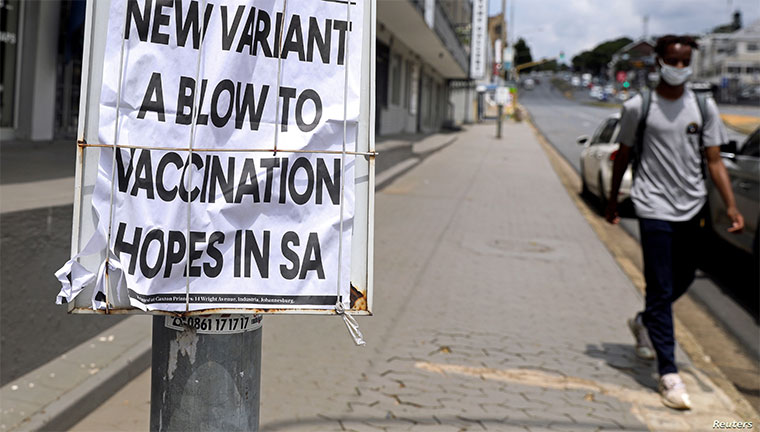 Officials from the National Institute for Communicable Diseases announced late Sunday that they have detected the B.1.617.2 and B.1.1.7 variants among the South African population. With just under 1.6 million confirmed cases, South Africa leads the continent in coronavirus infections. Of those, nearly 55,000 people have died.

“It is not surprising that new variants have been detected in South Africa,” said Adrian Puren, the institute’s acting director. “We would like to assure the public that the institute is focusing their resources and research efforts towards understanding the variants and what the potential implications are for South Africa.”

The first variant, B.1.617.2, has been detected in four positive cases, the institute said. Two of those are in Gauteng, the most populous province, and home to Johannesburg and Pretoria. South African officials said in a statement that all four known cases of this variant “have been isolated and managed.” and that contract tracing was underway.

B.1.617.2 is among the variants currently circulating in India, where the Johns Hopkins Coronavirus Resource Center says 22.6 million COVID-19 cases have been reported - though health experts have warned that they believe both cases and deaths are being underreported in India.

Officials with the institute said they are now giving higher priority to positive samples from travelers entering South Africa, especially those coming from India. The second variant, B.1.1.7, has been detected in 11 cases, South African officials said. This highly transmissible variant was initially detected in the UK.

Officials urged South Africans to be vigilant, as the nation battles to secure enough vaccines to achieve herd immunity. The nation’s vaccination campaign has moved slowly so far, and to date, just over 382,000 people - all of them health workers have been vaccinated.

The next phase of vaccinations is set to begin next week.

“We understand that many are suffering from COVID-19 fatigue, and becoming lax in exercising preventative measures,” Puren said.

“But for the sake of yourselves and your loved ones, wash or sanitize your hands, wear your masks and maintain physical distance of 1.5 meters from others. Remember to hold gatherings outdoors, or in well ventilated areas and roll up your sleeve once the COVID-19 vaccine becomes available to you.”