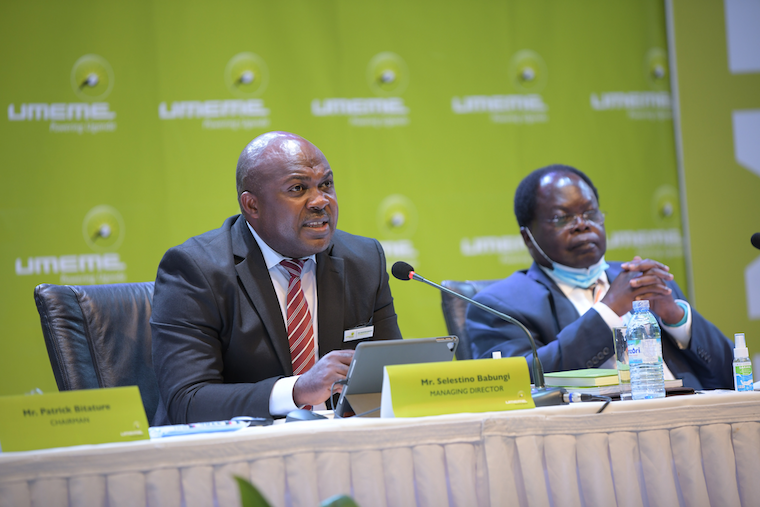 The concern over the president’s statement emerged this week on Thursday as Umeme shareholders met for the annual general meeting in Kampala. Umeme board chairperson, Patrick Bitature while addressing the shareholders, said Museveni's remarks are already impacting the company negatively.

Bitature says, for example, the company’s shares lost their prices by half when the president first demanded to know about the concession, and that since then, the price has never recovered.

"His excellency demanding to know what is happening with the concession and the stock price took a nosedive and has not really recovered since. We came from about Shs 450 down to Shs 220. That is where people's most value is lost." said Bitature.

He however assured the shareholders that even if the government decides to terminate Umeme's contract before the expiry date in 2025, the shareholders will walk away with $300-500m (about Shs 1.7 trillion) in unrecovered investments, paid within 6 months.

"In trying to comfort you in consolation, our concession comes to an end in 2025 or today for any reason. The payout of unrecovered investment would pay nearly Shs 600 per share. So not all is lost. Your money is protected and I'm emphasizing the sanctity of contracts, and if for any reason the government chooses to exercise its prerogative to terminate, then they would duly compensate us within 180 days, the money that is unrecovered which is in the tune of $300-500m right now. So, I want to assure you that the board's task is to protect your investment much as we're completely aligned with growing the economy and bringing down the tariff of Uganda. So it is a balancing act that we're trying to maintain," Bitature added.

Museveni's scrimmage with Umeme has been going on since 2018 when government assessed the cost of terminating Umeme's contract. Museveni in March 2018 wrote to then Energy minister Irene Muloni directly against renewing Umeme's contract over what he termed as exploitation of consumers.

Last week, Museveni said, now the government will bypass the Umeme distribution system when supplying electricity to industrial parks. Museveni said, some people he didn't mention, went behind his back and brought Umeme which started operations in the country in 2005.

"They went behind and then brought something called Umeme. What is this for? A private company looking for profits, you make it a middleman? What is this? If you had told me before, I would have never allowed it. I didn't know! So electricity is now cheap at generation except for Bujagali, the problem a middleman called Umeme comes in the middle and then [claims] 'concessions papa....para..para.ooohh.' So the war I'm having now, is that the power for industrial parks will go straight from generation to be transmitted directly not through Umeme. 'Oooh, Umeme will collapse.' If it collapses, my mother died and I buried her. So if Umeme dies that is their mistake." Museveni remarked on May 1.

The president’s remarks seem to have caused panic among the power distribution company’s shareholders given the past on and off discussion on the possible renewal of its lease with Uganda Electricity Distribution Company Limited (UEDCL).

Bitature expressed worry that the comments are discouraging investments because no investor wants to make a long-term investment in a concession that is not certain of renewal. Umeme is operating in Uganda under a lease from UEDCL.

National Social Security Fund (NSSF) is the largest shareholder with 23% shares, having invested more than Shs 400bn when the company first issued shares in the stock market. The investment has since gone down to about Shs 80bn, despite Umeme consistently making huge profits.

The factors affecting the share price is said to be the bad image of the company, mainly to do with the unstable supply of electricity, high tariffs, which lead to calls for the cancellation of the concession.

In a cautious statement, NSSF managing director Richard Byarugaba says they cannot afford to see the company fail because millions of Ugandans have an interest in it through the NSSF shares. He said the shareholders and the president have a reason for their sentiments.

"We represent about 2.5 million members, who at the very beginning of the IPO invested almost Shs 400bn in this company. Today, the value of that investment is only Shs 80bn. It shows you how much value we have lost in the company which why we're very passionate about the survival of this company. So, we honestly agree that the investments that we make in the network need to continue. We need to attract investments into the sector so that this company can provide service that is usable to the manufacturer. The president and the government would like us to deliver a product that is cheap," said Byarugaba.

Bitature allayed the fears of the shareholders and assured them that the company will successfully go through the negotiations. Terming the government as a tough negotiator, he equated Umeme’s situation to what the oil and gas companies about the East African Crude Oil Pipeline deals that were recently signed in Kampala.

"For the recent comments, I want to reassure you that we have had negotiations for over a year and they have been very cordial. I know some of the remarks have raised some eyebrows around the world but our government is a very tough negotiator in all their negotiations. Many of you have seen what happened with the oil and gas industry, the negotiations were very hard, the government pushed for a very hard deal. We're aware of this, we'll do our best to protect our shareholders, but we're very cognizant that we must arraign ourselves to the government's interests and industrialization is a priority for this country as an emerging economy. That is what we're going to do and we shall keep you posted," Bitature said.

Meanwhile, Umeme shareholders approved a total dividend payout of Shs 19.8 billion after endorsing Shs 12.2 per ordinary share based on the company’s 2020 performance. The dividend will be paid out on or about July 19, 2020, to shareholders in the company’s register at the close of business on 25th June 2021.

The AGM also approved the appointment of M/S Ernst & Young Certified Public Accountants as external auditors for 2021 and the remuneration of the non-executive directors. Bitature thanked the shareholders for their continued trust and confidence in him to lead the board of Uganda’s leading electricity distributor at this pivotal period in time.

“We are continuing to engage the government on an early concession renewal post the 2025 concession. We are optimistic we shall reach a mutually beneficial agreement,” Bitature said.

Bitature said even with the difficult foregoing circumstances, Umeme has transformed for the better and for the people.

“We continue investing in digital and ICT solutions for the ease of our business solutions and services for our customers,” he said. Adding that the issues around reduction in power tariffs was an interest to all the energy stakeholders.

“Umeme remains committed to playing its part of the equation through driving distribution efficiencies, increasing consumption and investments in the system to evacuate the increased generation capacity,” Bitature said.

The investment went into the building and upgrading 7 substations in Ntinda, Kakiri, Gulu, Mbale, Bombo and Nakawa, constructing distribution integration lines with transmission infrastructure, expansion of distribution transformer zones and conversion of 168,000 customers to prepayment metering. He said the performance reflected the challenging operating and regulatory environment.

“We shall continue to focus on safety, continuity of electricity supply services, resolution of the regulatory matters, operational and financial performance,” he said.

+1 #1 kabayekka 2021-05-09 14:30
In other words why should those companies generating electricity supply not supply this power directly to the consumers.

This way more power will be generated through solar and wind power generation systems.

Investments and profits made would directly benefit the supplier and the consumer instead of benefiting the middlemen or middlewomen!
Report to administrator
+2 #2 Mike Larry 2021-05-09 17:17
Honestly though, Umeme is so corrupt and unable to handle it's tasks. I don't go a day or at the most 2 days without a blackout.

Even when you have power, it's unstable. It's just as worthless as the so called national water.
Report to administrator
+1 #3 kabayekka 2021-05-10 00:55
Patrick Bitature is a Ugandan businessman and entrepreneur and believed to be the second wealthiest Ugandan after Sudhir Ruparelia.

He is the chairman of Simba Group of Companies, an East African conglomerate, with interests in telecoms, energy production, mining, media, real estate, travel, and leisure and is the constant chairperson of the board of UMEME.
Report to administrator
0 #4 PaulM 2021-05-10 11:46
UMEME is a cartel bent on maximising profit at the expsense of Ugandans. NSSF should cut its losses and dump its shares.
Report to administrator