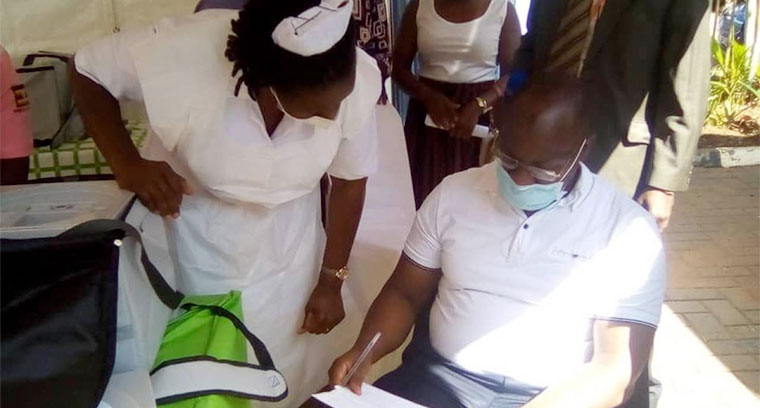 Entebbe Regional Referral hospital has run out of Covid-19 vaccine doses. Already 3,720 people have been vaccinated at the hospital.

The hospital's vaccination exercise usually runs from 8 am to 5 pm every weekday. However, on Friday last week, the centre closed at 2 pm because there were less than five doses remaining and yet over ten people were waiting in queue to be vaccinated. The health workers tactically told people in the waiting area and others who kept flocking the centre even after 5:30 pm that they had worked half-day.

Irene Kobusingye (not real name) says the medics told her to return today Monday. Kobusingye, 60, was in the queue with 12 other people.

"I came on Friday because I work half-day," said a one Joseph Mulondo. “I was also told the centre closes after 5 pm every Friday because people are usually many,” said Mulondo, a teacher at one of the private schools.

65-year-old Imran Sseguya, a farmer and resident of Kigungu, says he was disappointed that the centre closed before 2 pm. He'd been in the queue at 1:50 pm. “But a nurse came and told six of us who had sat in the shed that they have decided to close the centre.”

Sseguya says he was shocked that the centre closed earlier than expected because just like Mulondo, his peers had told him that the centre closes sometimes at 6:30 pm on Fridays due to the big numbers. According to records, the centre has been vaccinating the highest number of people on Monday and Friday. The numbers range between 150 and 200 on both days.

“The officers are supposed to restock when they have less than 100 doses. So this was an oversight on their part and we apologise to the people who missed out. Let them return next [this] week,” said Dr Kalyesubula.

Some of the health workers at the centre however say they requested an additional 1,000 doses but were given only 500 on Tuesday last week. The hospital gets doses from Wakiso district headquarters.

The team also expects to collect at least 3,720 doses for those who will return for their second jab, starting Wednesday, May 5. The vaccination exercise commenced on March 10 and 3,720 people have so far been vaccinated.

The hospital received 3,724 doses of the AstraZeneca vaccine, which means that they have used 99.8 per cent of the doses delivered. Those vaccinated include the elderly, health workers, teachers, security officers, staff from United Nations (UN), airlines and government bodies such as Uganda Wildlife Conservation Education Centre (UWEC) and National Medical Stores (NMS).

The hospital has registered a higher turn up compared to the national turn up rate of 34.2 per cent. According to the Health ministry by April 30, 330,077 people nationwide had been vaccinated across the country.

Uganda received 964,000 doses. Unlike at some of the vaccination centres across the country where people hardly turn up for vaccination, at Entebbe hospital, at least ten people queue up every hour to receive the jab.