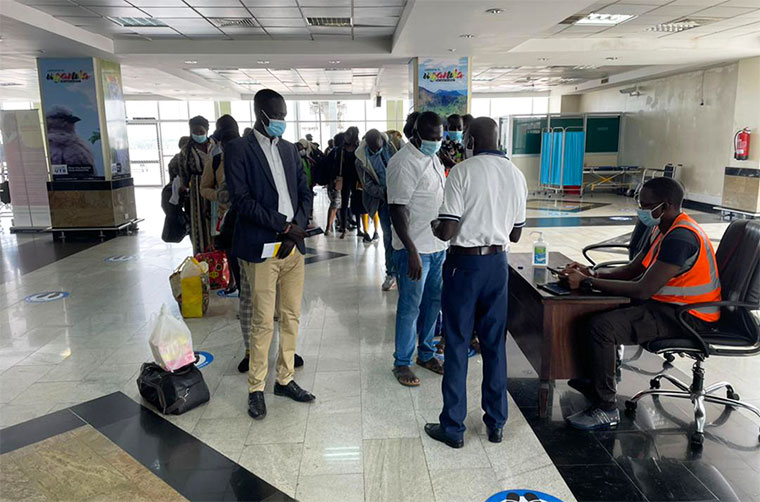 Over 25 Ugandans are on the red list of the International Criminal Police Organization (Interpol) for committing transnational crimes.

Charles Birungi, the acting director Uganda National Central Bureau says the suspects have their images shared with all the 190 Interpol member countries  - meaning they can be arrested at any time their images and personal data is detected by security systems of various countries.

A person becomes wanted when he commits a crime in his mother country or in another country but afterwards goes into hiding. In order to appear on the Interpol red notice, it is the country in which the crime was committed that takes the initiative to inform all member states.

After a notification is generated, it is accompanied with particulars of the crime the person is alleged to have committed as well as his individual data that comprises of age, skin colour, height, body features and travel history.

Birungi explains that first, it is the Criminal Investigation Directorate (CID) or Directorate of Public Prosecution (DPP) to open or sanction a case file against the accused person. Afterwards, DPP or CID informs Interpol in order to obtain an international warrant of arrest.

Although Birungi does not disclose the particulars of crimes the wanted persons allegedly committed, URN understands that a number of them are suspected to have participated in the killings of prominent Ugandan Muslim clerics, businessmen, state prosecutor and security chiefs.

In the last six years, more than a dozen prominent Muslim clerics such as Sheikh Mustafa Bahiga, Sheikh Abdul Khadir Muwaya, Sheikh Hassan Kirya were gunned down by men moving on motorcycles.

Although some suspects in some of the killings were arrested and charged, in many other cases no suspect has been arrested or convicted. Cases that have no suspects include the murder of state prosecutor Joan Kagezi, murder of then Arua Municipality MP Col Ibrahim Abiriga.

Other security chiefs who have been killed by shooting in the last six years include the Assistant Inspector General of Police (AIGP) Andrew Felix Kaweesi, former Buyende district police commander, Muhammad Kirumira and Maj Muhammad Kiggundu.

“Some of these wanted persons have repeatedly involved themselves in cybercrimes. They have hacked telecoms, banks and ministries. They have been doing the same vices for more than four years but bringing them back here has been a problem,” a police source said.

Birungi said that the list of wanted persons is updated every five years and cannot be released now because some of those wanted might take advantage and change some of their travel documents or from their current locations. He adds that if the person on the wanted list is not arrested within five years, DPP or CID must write again expressing needed to keep the person on Interpol red notice.

In its April 20 report, Interpol says its Operation Simba III (March 19-28, 2021), Ugandan authorities at the Mutukula border were able to seize 25 kg of ammonium nitrate and other materials used by terrorists to manufacture improvised explosive devices.

Kenyan authorities at the Moi International airport in Mombasa arrested a woman after she was found carrying 5.3 kg of heroin worth some $137,000, having travelled to Kenya via an alleged drug trafficking route from South Africa to East Africa.

Border checks also led to the detection of an individual wanted for alleged links to terrorism, as well as of another individual sought by the International Criminal Court for crimes against humanity.

Interpol operated in March in East Africa and only one Ugandan lady was arrested for drug related charges.This story is misleading.
Report to administrator
+1 #4 Loveuganda 2021-05-03 17:04
What's the purpose of the incomplete story without names? This does not make sense.
Report to administrator
+1 #5 kabayekka 2021-05-04 13:34
Of course these suspects can demand United Nation political asylum.

And most of these barbaric nations have been under the inhuman bondage of colonial rule for decades!
Report to administrator