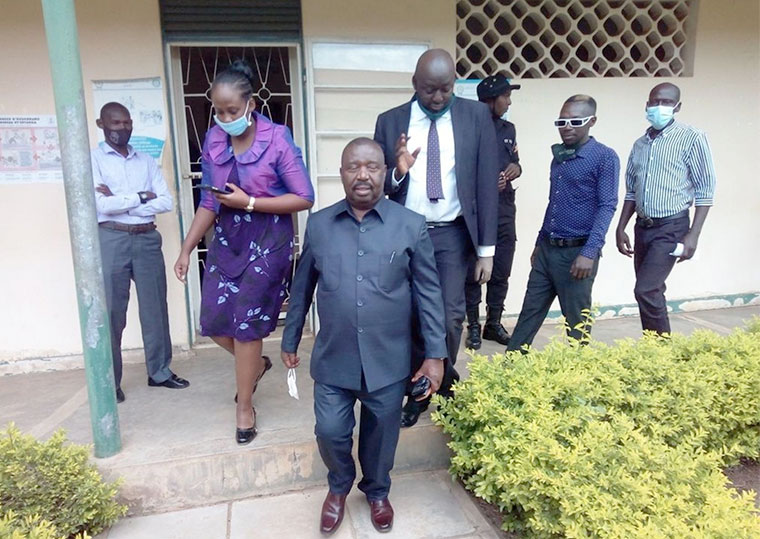 State minister for Labour Mwesigwa Rukutana has been acquitted of all charges stemming from a shooting incident in the just concluded campaigns. Rukutana was facing seven counts of attempted murder, threatening violence and malicious damage to property.

Rukutana was arrested with three of his bodyguards from his home in Kagugu in Rushenyi county, a day after the National Resistance Movement (NRM) party primaries on September 4, 2020. He was accused of shooting Dan Rweburingi, his rivals’ agent and damaging property among others.

Pprosecution alleges that on September 5, 2020, at Kagugu village in Ntungamo district, Rukutana assaulted Julius Niwamanya and threatened to kill or injure him together with three others.

The others are Stuart Kamukama, Dan Rwibirungi, and Moses Kamukama.  It was also alleged that Rukutana also willfully and unlawfully damaged a motor vehicle registration number UAR 840X Toyota Rav 4 belonging  to one Moses Muhumuza.

A video that went viral on social media showed Rukutana grabbing a gun from one of his bodyguards and shooting at a vehicle belonging to supporters of his political rival Naome Kabasharira. At the time of the incident, Rukutana had just lost the Rushenyi country NRM flag to Kabasharira, who eventually won the main race edging him out of parliament.

But the Chief Magistrate's court in Ntungamo presided over by Gordon Muhimbise said that the evidence adduced in court by the prosecution against Rukutana on all seven counts was full of concoctions, falsehoods and grave inconsistencies.

Muhimbise said that the prosecution evidence was nothing but 'naked lies' and that no reasonable tribunal or court can convict anyone basing on such statements. He added that most of the allegations were discredited during cross-examinations.

"I find the evidence adduced by the prosecution against the accused on all the seven counts full of contortions, full of falsehoods and grave inconsistencies. The prosecution evidence is full of nothing but naked lies that no reasonable tribunal or court can convict based on it. It was also greatly discredited during cross-examination. On the other hand, I find the defence evidence very consistent, well corroborated and believable. From the record here, it is clear that these charges were a frame-up to malign the name of the accused and destroy his reputation. In the circumstances I find that the prosecution has not proven any of these charges against the accused beyond reasonable doubt," Muhimbise said.

Rukutana welcomed the judgement and said that his political enemies who had falsely testified against him in the court were like the builders of the Tower of Babel who wanted to reach God but failed in the way because of their ill intentions.

+6 #1 Apollo 2021-04-30 22:48
It is all a game. They prepare preposterous charges that will never yield a conviction. The obvious charges like carrying military supplies, discharging a weapon or threatening violence are so poorly prosecuted that judge is left with little or no choice.

There is one consolation however, sooner or later, this thuggery catches up with the criminal. He will commit another crime and this time there will be no bungling up the case.
Report to administrator
0 #2 Samuel 2021-05-01 16:21
This government and its members insist regime can change anything for now,there is going to be a time.

How on earth do you expect us to be belive that judgement from a one muhibisibe???

Its a shame,how Court is behaving in a funny way,this is an believable.