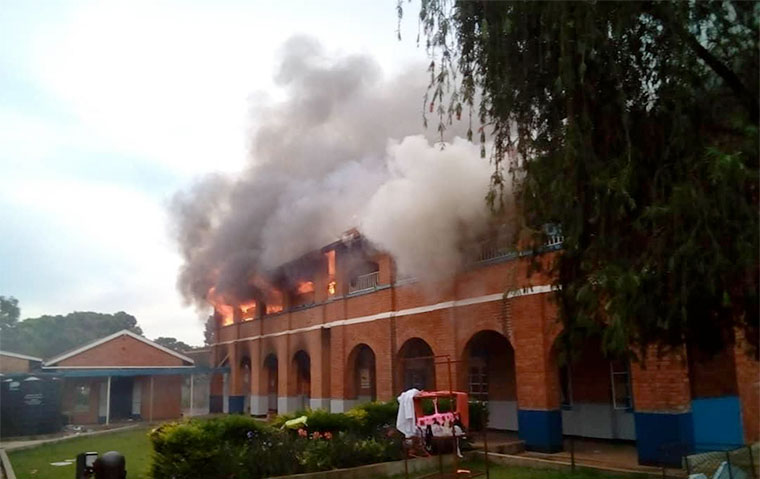 Preliminary police findings into the fire that gutted a dormitory at King’s College Budo point to possible arson.

On Tuesday morning, fire gutted Grace House, one of the girls’ dormitories at King’s College Budo in Wakiso district, destroying student’s property worth millions of shillings. The fire is said to have broken out while students were attending morning preps in their classes.

Luke Owoyesigyire, the deputy Kampala Metropolitan police spokesperson, said no student was injured in the fire since they were out of the dormitory. Moments after the incident, several people including Wilberforce Kityo Luwalira, the Bishop of St. Paul Cathedral Namirembe visited the school and appealed to police to carry out expeditious investigations and release their findings.

"We have also ascertained that this should be treated as suspected arson after getting an eyewitness account that shows that the fire could have started on the side of the window. We’re calling upon parents and administrations plus the students to remain calm as investigations into these incidents go on with the aim of ascertaining who could be behind this," Owoyesigyire said.

Owoyesigyire also revealed that they recorded statements from several key people at the school including administrators, teachers, and students.

“We have recorded their statements but they were released on police bond. We cannot mention them now, but we have also retained one person to give him protection. He knows everything that transpired before the fire started, he is helping us with more information and as a witness,” Owoyesigyire said.

Hassan Kihanda from the Directorate of Fire and Rescue Services, who is heading the investigating team, says that their findings are not conclusive. Meanwhile, Natete police station is also investigating another fire at King’s Fahad Islamic primary school in Busega, a Kampala city suburb on Tuesday evening. The fire that broke out on the second floor of the building that housed dormitories also reduced the pupil’s property to ashes.

“Currently, the police investigations show that fire was caused by electricity-related problems. Investigations are still ongoing but there is a high suspicion of a short circuit as the main cause of that fire,” said a police officer at Natete police station.

Fire has gutted several schools and buildings over the years in the country. According to the annual crime report 2020 compiled by the fire and rescue services headed by Joseph Mugisa, police recorded 1,015 fire incidents last year. Land wrangles, school rivalries and school strictness have been blamed as some of the major causes of school fires.