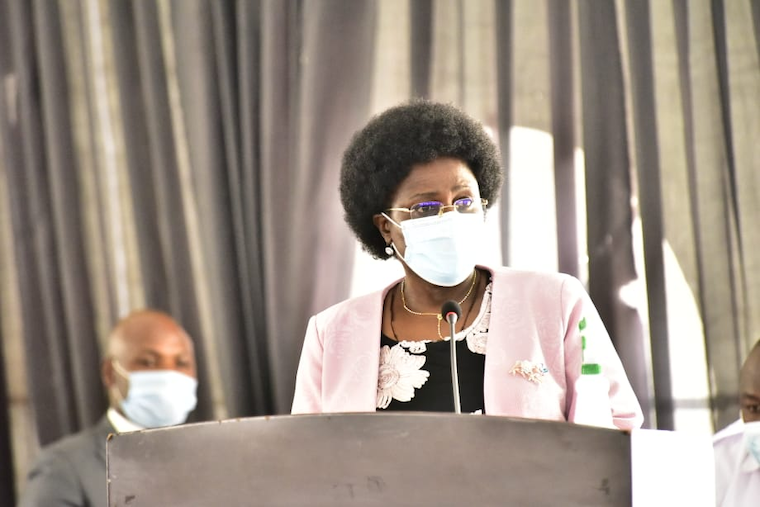 Mary Goretti Kitutu, the minister of Energy and Mineral Development

On Thursday, April 15, 2021, two letters purportedly issued by State House made rounds in the media. One of the letters said the former executive director of the Rural Electrification Agency (REA), Godfrey Turyahikayo had been reappointed to the top job and Charles Lutwama, also formerly with REA, appointed as deputy.

In the second letter, titled “Immediate Arrest and Apprehension of Mr John Turyagyenda and Mr Godfrey Werikhe”, the president reportedly expressed regret that the minister of Energy and Mineral Development, Mary Goretti Kitutu had renewed the contracts of the two officers indicted by investigative reports from the Inspector General of Government (IGG), Police Criminal Investigations Division (CID) and the Internal Security Organization (ISO).

The employment contracts of Godfrey Werikhe and John Turyagyenda expired in December 2020. It should be noted that Werikhe and Turyagyenda were sent on suspension by the Rural Electrification Authority Board in a meeting of April 29, 2020, after an IGG report implicated them in mismanagement of projects, allowing installation of poor-quality equipment and shoddy works by contractors.

They were still on suspension when their contracts ended in December 2020. Also, in his letter dated March 10, 2020, the president instructed the CID chief Grace Akullo to arrest and have the duo prosecuted. However, CID decided to undertake further investigations, which have taken more than one year.

In a press release dated April 16, 2021, which also appeared in the New Vision edition of Monday, April 19, 2021, and in social media, the Permanent Secretary of the ministry of Energy and Mineral Development (MEMD), Robert Kasande, emphasized that the said contracts have never been renewed by the minister.

If Kasande is to be believed, it is not clear how the two officers could be earning salaries beyond December, 2020 without contracts. Sources from REA indicate that the duo signed new contracts after the minister had given an instruction to the accounting officer, Joan Mutiibwa, to issue them.

It is also instructive to note that Werikhe has been using a REA official vehicle Reg. N0. UG0382K, a pickup, while on suspension and also after his contract had expired. How could the minister allow this if she did not recognize him as a member of staff of REA?

Interviewed for a comment on Monday, April 26, the Permanent Secretary, Robert Kasande, said that all those letters, which have been circulating on social media reportedly from the president to Minister Mary Goretti Kitutu are false and that the contracts of Turyagenda and Werikhe have not been renewed.

“All those letters circulating on social media are false and the rumours that Turyagenda and Werikhe’s contracts were renewed are not true,” he said.

He added that he is not aware of the two receiving their salaries after their contracts expired. He said however, that the two had to continue getting half salaries while on suspension since April last year.

“While the two were under suspension, they still had to be paid half of their salaries but since their contracts expired, they are not supposed to be getting any salary and I am not aware of any reports that they are still being paid,” Kasande said.

In another development, in her letter dated December 22, 2020, the minister instructed Ms.Mutiibwa to issue a contract extension to Benon Bena, manager for Off Grid Renewable Energy Development, and in the same letter asked her not to extend the contract of Charles Lutwama, manager for Investment Planning and Promotion.

Benon Bena has since continued to earn a salary while Lutwama was sent packing. There was no basis given for this decision, more so when it is the board, which has the power to renew contracts, and not the minister.

Dr Mary Goretti Kitutu was appointed as minister of Energy and Mineral Development after a cabinet reshuffle in December 2019. In April 2020, she developed and passed a new Statutory Instrument for REA, which was eventually quashed by court in September 2020. Court faulted the process of the development of the instrument and its passage without stakeholder consultation, in particular cabinet, donors and key ministries of Finance and Local Government, among others.

Court also noted that she had removed from the board structure the permanent secretaries of ministries of Finance and Local Government who had previously been on the board in line with the earlier instrument used by REA for about seventeen years.

Sources in the energy sector say that the two PSs had been at the forefront of sending Werikhe and Turyagyenda on suspension. With the two PSs off the board and replaced, it had been anticipated that the new board would return the duo to REA.

Since April 2020 when the minister issued a new instrument, REA has never stabilized. The Rural Electrification Board chaired by PS, MEMD has never been convened. At the moment, REA has no institution head. This quagmire also led to the halting of the negotiations for the proposed World Bank funded $400 million loan and grant in March 2021 meant to connect over one million households, businesses and institutions to electricity under the free Electricity Connections Policy.

The project was projected to contribute to increasing demand to electricity by about 180MW and also benefit local manufacturers of transformers, cables and poles, among others.

It has been noted that REA Uganda is currently the most unstable REA in the region. Countries like Kenya, Rwanda, Tanza- nia, Nigeria, Zambia and Zimbabwe, among others, have kept their agencies very stable and have hence been able to attract cheap and free funding and ably increase their electrification rates much faster.

All these countries picked the concept of establishing their respective REAs from Uganda. With the grid electrification rates still very low at just 25 percent in the whole country, it is critical that the government addresses the governance issues facing REA.

+1 #1 WADADA rogers 2021-04-28 12:57
Reading between the lines, one can tell that this article was funded to find space in this paper, somebody somewhere is after settling personal scores or to malice somebody into exit.

When are were going to have professional journalism in this country instead of hate mercenaries.
Report to administrator
-1 #2 alex erejo 2021-04-28 15:08
Indeed this is a sponsored article. The Officers whose privacy has been infringed upon by revealing what goes on in their bank accounts should sue Stanchart for breach of confidentiality.
Report to administrator
+1 #3 kabayekka 2021-04-29 02:32
In the meantime, the electricity customer in this country continue to pay for hydro electricity through their nose.

The generation of solar and wind energy, is left alone for another future term of rule of this government!
Report to administrator