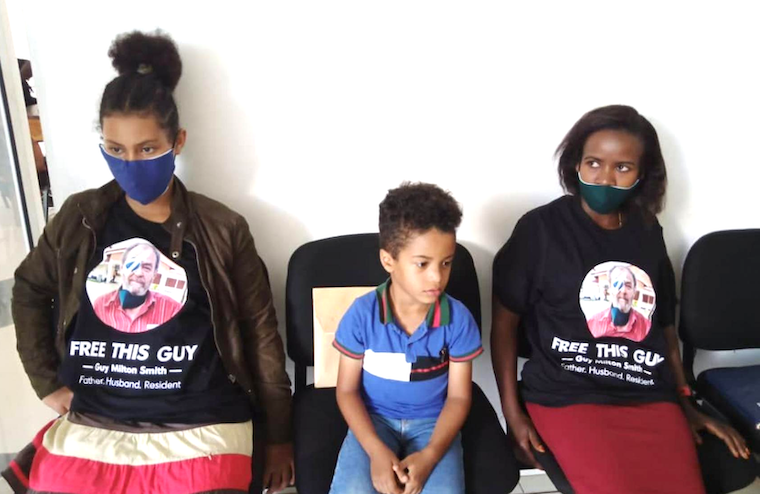 The High court has ordered the government to produce detained American national, Guy Smith and also explain why he has spent more than the mandatory 48 hours without appearing in court.

Justice Musa Ssekaana, the head of the High court Civil Division issued the orders following a successful application filed by Smith's lawyers from the Centre for Legal Aid led by Henry Byansi and his wife, Sharon Tusiime.

In their application, the applicants demanded that the government produces their client in court dead or alive and show cause why they have violated his right to liberty. Tusiime argued that security personnel invaded their home in Fort Portal city in western Uganda at around 2:00 am on March 21, 2021, and forcefully whisked her husband to Kampala.

Court heard that Smith has remained incommunicado at the Special Police Investigations Division headquarters under unconstitutional, illegal and unlawful directives from Brigadier Chris Serunjogi Ddamulira, the director of Crime Intelligence in the Uganda Police Force. The law requires that suspects appear before the court within 48 hours of their arrest.

Tusiime explains that by the time of his arrest, Smith had just undergone surgery at Ruharo Eye Centre in Mbarara on his right eye on March 16, 2021, and was still recovering when security personnel broke into their house and whisked him away.

She also expressed concern that Smith who on several occasions suffers from heart failure has not yet been informed about charges against him.

In his ruling, justice Ssekaana directed the government, which issued together with Brig Serunjogi, the commandant of Special Investigations Bureau Kireka and the Inspector General of Police to bring Smith in court on May 4, 2021, and explain why he should not be released from detention.

Last week, the government, represented by the state attorney, Franklin Uwizera asked for more time to respond to the case, which was granted. However, the government was no show in court today which prompted the Judge to issue an order directing the government and her security agencies to produce Smith next month.

In March 2021, the police released a statement, saying that Smith had been detained for plotting subversive activities against the government of Uganda.

He has also played the western powers to give a blind eye to his atrocities by doing their bidding in Somalia and by enabling them loot Congo's resources.
Report to administrator
+1 #2 WADADA rogers 2021-04-28 08:32
They may be suspecting him of aiding Bobi Wine or for spying on Uganda
Report to administrator
+1 #3 Lakwena 2021-04-28 08:41
In other words, this is just one of the very many cases for which "COURT CASES ARE KILLING THE POLICE.

From LDU upward; we have all sorts of Evil Security Organizations, whose collective function is being Gen Tibuhaburwa's Hench and/or Hatchet men/women. All of them posturing and masquerading as e.g. Crime Intelligence; Crime Preventors;etc.

Instead of preventing or fighting crime, their occupation is criminal in practice: extortion, terrorism, criminalizing, planting evidence, abducting and harming innocent people especially the opposition.
Report to administrator
+1 #4 Kalibbala 2021-04-28 19:35
illegal and unlawful directives from Brigadier Chris Serunjogi Ddamulira, the director of Crime Intelligence in the Uganda Police Force.!!!!

That is the Defunct Uganda Police Force whose Job is to Extort Money from Victims, Kill and Maim innocent People plus Arson!

Burning down of Schools and Business of indigenous Wanainci!All
This is Ordered by The Almighty Curse, Kisiraani and Enemy of Humanity Who is Bent To Break America's back!!

Like Saddam Hussein He Brags of Nuclear power From North Korea to turn Uganda into Another Nagasaki!! Failed State.where People are dying like Flies in Safe Houses and Hospitals!! The Capital City is a Toilet when it rains!! Disgusting !!
Report to administrator