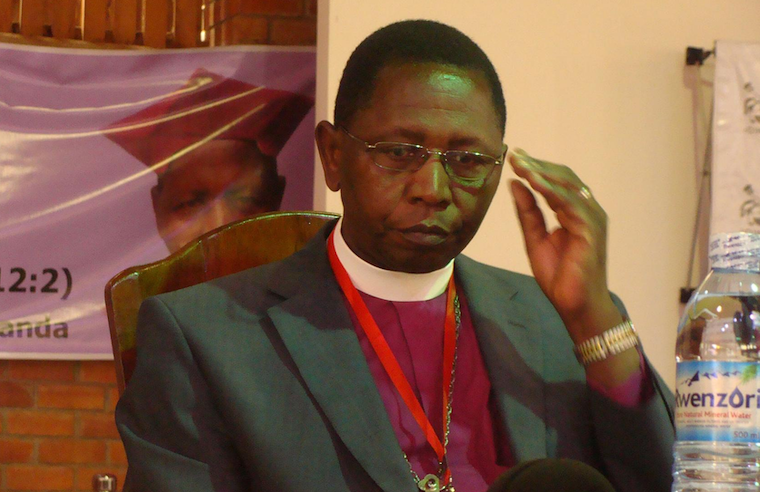 Even after making a public apology for committing adultery, the former Archbishop of the Church of Uganda, Stanley Ntagali's troubles seem not yet over.

Rev. Christoper Tugumehabwe, who accuses Ntagali of committing adultery and siring a child with his married wife Judith Tukamuhabwa is demanding Shs 500 million in general damages.

Tugumehabwe also says the archbishop's intrusion into his marriage also cost him his job as a lecturer of religious studies at Bishop Barham University College (BBUC) in Kigezi.

Tugumehabwe exchanged vows with Tukamuhabwa on December 15, 2018. However, at the time when the couple should have been celebrating their second anniversary of marriage, they divorced before Kabale Chief Magistrate's court on December 8, 2020.

In an intention to sue dated April 26, 2021, and signed by Lawyer Erasmus Nabimanya, Tugumehabwe through his lawyers Bikangiso & Company Advocates accuses Ntagali of advising Tukamuhabwa to divorce citing cruelty.

Nabimanya says that his client has video and audio evidence of Ntagali admitting and apologizing through the media to have committed the offense of adultery with Judith. The lawyer says that Ntagali’s sinful conduct caused Tugumehabwe’s loss of dignity, stress, trauma embarrassment, and privacy.

He says that it also led Tugumehabwe to lose his job at the university and minimised his chances of rising up the clergy ranks.

“Your unbecoming, sinful, and unlawful conducts have occasioned on our client general damages to wit - loss of dignity, marriage breakdown, stress, trauma, embarrassment, loss of privacy, loss of his job as a lecturer at Bishop Bahram University College and minimal chances of rising in the clergy ranks." the lawyers note.

Nabimanya thus wants Ntagali to pay Shs 500 million to Tugumehabwe as general damages as well as pay another Shs 30 million as costs he incurred in divorce case No. 5/2020.

He also wants Ntagali to make a formal apology to Tugumehabwe. Nabimanya says that if Ntagali fails to comply within 14 days he will be dragged before a court. The intention to sue is also copied to the incumbent Archbishop Kazimba Mugalu.

Efforts to get a comment from Ntagali were futile as he could not pick our reporter’s phone calls. On Thursday last week, Ntagali publicly confessed to the sin before Anglican bishops, selected priests, and faithful who gathered at Namirembe Cathedral to mark the 60th anniversary of the Church of Uganda’s self-governance.

Ntagali noted that although he was spiritually strong since the Christmas Eve of 1974 when he got saved, he sadly weakened in faith and fell into sin. He informed the congregation that he has since confessed and concealed himself in prayer seeking pardon and guidance from God.

He also said that he is turning to his brothers and sisters in faith to find a place in their hearts to forgive him. He further sought forgiveness from the family of Tugumehabwe whose wife he committed adultery with.

Ntagali's adultery scandal became public in January this year when Archbishop Kazimba suspended him from performing priestly duties noting that the act is as immoral as homosexuality and that they cannot shy away from their commitment to moral standards.

Ntagali served as 8th Archbishop of the Church of Uganda until March 1, 2020, after clocking the mandatory retirement age of 65. While serving as Archbishop, Ntagali was also the Bishop of Kampala and earlier served as Bishop of Masindi-Kitara Diocese from 2004 to 2012.

My Reverand uncle was striped off his religious post because his wife cheated on him, but he didn't claim for payment!

Hahaha, people are not shameful! Since when has people started paying for sleeping with another person's wife.

It happens every where, all the time. How much money could women collect if everyone sleeping with their husbands had to pay. Just move on man, don't shame yourself. vbh6n

You have comprehension issues. The man lost his job, rightfully points out that this weasels' action hurts his chances in that church, and suffered embarrassment in addition to other hurts. He has standing to sue the weasley hypocrite.
Report to administrator
+1 #13 WADADA rogers 2021-04-28 13:52
This wife-husband game has never been for financial gain, now that the man himself has admitted that the "devil" was stronger than him, the two men of god should exchange wives instead of making monetary demands.

Okay i know Ntagali's wife is extremely old but she may be purer compared to the younger lady that tempted Ntagali. Before long we shall hear Ntagali has died of depression.
Report to administrator
+1 #14 Eric L 2021-04-28 15:58
Lawyers are a messy profession in the world. Imagine a lawyer terming anything "sinful" yet theirs is always illegality.

Anyway, I will be one of those ready to contribute a penny should Ntagali face a fine. Am not in support of the adultery charge but rather in the guts and genuineness of the former Archibishop to stand and accept the transgression and seeking for forgiveness.

Let the one with no sexual immorality sin be the only to throw a stone at Ntagali,not me.
Report to administrator
0 #15 WADADA rogers 2021-04-28 16:00
If it is true that these two former love birds voluntarily divorced on December 8, 2020, it means their marriage had already broken down immediately after December 15, 2018 and siring a child with his wife Judith Tukamuhabwa was part of an attempt to move on.

Tugumehabwe will not succeed with this demand after divorce, it does not work like that. Ntagali was himself struggling with an old woman at home and here was a chance to have a young beautiful woman tired of her own marriage
Report to administrator
0 #16 Lakwena 2021-04-28 16:33
It is a pity, the top collar in Church of Uganda are now washing their dirty linen in public, on the streets;highway and byways.

Humanly speaking right from the Medieval Papacy the Catholic Church has been smarter in handling her priests' sex related scandals.

In other words, except the body language, which is visible; why did God give us "the invisible mind"? It is to keep secrets. Otherwise, considering what goes on in the minds of men and women; very people would sit next to each other. Eish!

Hahaha, people are not shameful! Since when has people started paying for sleeping with another person's wife.

It happens every where, all the time. How much money could women collect if everyone sleeping with their husbands had to pay. Just move on man, don't shame yourself. vbh6n

I couldn't agree more. The Reverend is trying to cash in on his wife he probably paid only two cows for as dowry.

Dear all, that demand is pure PIMPlNG if done by the man.

However, the wife can demand that the bio-father pays the full cost of raising that child to adulthood (the age at which he too can commit adultery).

More so, the real victim in this is the child, who now has no father, unless 1 of the mother's men takes him in, explain the situation so that he grows up with less pain!

The entire world has gone mad; women want to be equal to men in all ways, yet, it's the children they bear in pain, who suffer most from mothers' defiance!
Report to administrator
0 #19 Akot 2021-04-28 21:57
kambarage, thanks & agreed.

My uncle was a good man & wanted to be a priest from very young age & made his way through with respect & smile on his face always!

When his wife humiliated him, all he did was avoid crossisng her path, while he made sure his 2 kids from that woman were taken care of & grew up well.

The post painful is that my uncle knew nothing of life outside priestwood, yet the church he served with respect, threw him out for sin/defiance committed by his wife!
Report to administrator
0 #20 rubangakene 2021-04-29 17:12
You little pimp, you disgust Ugandans with your demand. How dare you? Just get another wife; this one has been tainted already.
Report to administrator
12