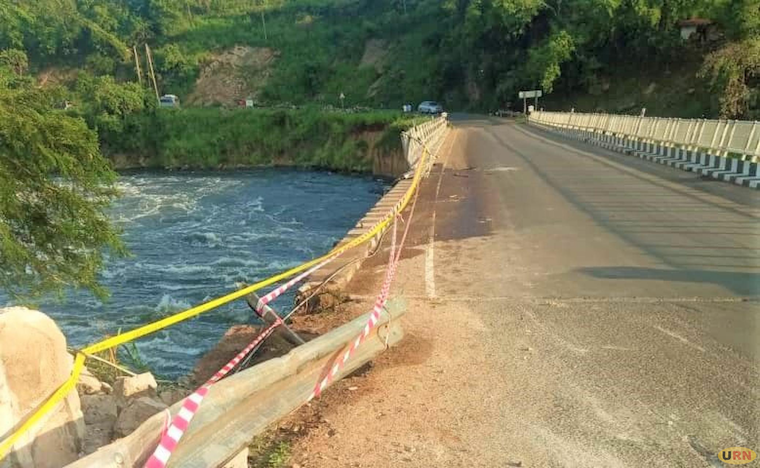 The scene where the fuel tanker plunged into the river

Police says hopes of searching and recovering victims of a fuel tanker that plunged into River Nile at Karuma bridge in Nwoya district are fading due to high volumes of water.

The driver of the truck Alex Ogwal and Howard Obaro, a pump attendant attached to Shine Energy petrol station in Lira city plunged into the river when their tanker lost control when its braking system malfunctioned. The duo was on their return journey after delivering fuel to Masindi port in Masindi district.

He explained that Joseph Mugisa, the director of Fire and Rescue Services visited the bridge on Sunday and said it was too risky for the rescue team to dive into the rapid falls to trace for the vehicle and its occupants.

Okema explains that the police have recommended to Uganda National Roads Authority (UNRA) to undertake some major rehabilitation works on the bridge that includes installing reflector road signs and proper lighting system to improve night vision.

Allan Ssempebwa, the UNRA media relations manager said he needed more time to get the update of what exactly happened and what the authority will decide. The accident was recorded under Nwoya Police Station vide TAR 24/2021.

It is the latest of a series of accidents along Uganda’s most dangerous bridge constructed in the 1960s. According to police, the truck becomes the 19th since 2011 to plunge into the R.Nile without a trace. Several oral testimonies from travelers and records from police show that at least 20 people have perished at Karuma bridge after the different vehicles they were traveling in plunged into the rapid falls since 2000.