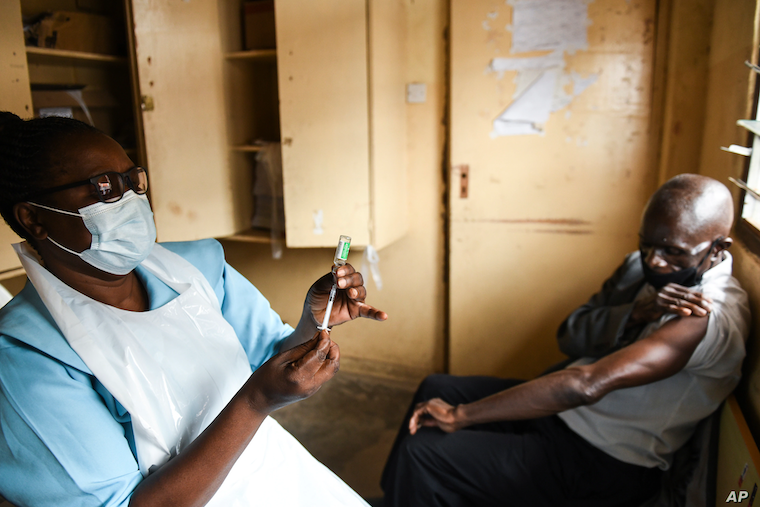 FILE - A man prepares to receive a jab of the AstraZeneca COVID-19 vaccine, at Ndirande Health Centre in Blantyre, Malawi

Malawi's government says it will go ahead with plans to destroy thousands of expired COVID-19 vaccine doses, despite calls from the World Health Organization (WHO) and Africa Centre for Disease Control (CDC) not to destroy them.

The WHO and Africa CDC this week urged African countries not to destroy COVID-19 vaccines that may have passed their expiration dates, saying they are still safe to use. However, Malawi's government says the appeals have come too late to prevent the destruction of thousands of doses of expired COVID vaccines.

Officials said the 16,440 doses of AstraZeneca vaccine that expired April 13 have already been removed from cold storage. On Thursday, the WHO and the Africa CDC had urged African countries not to destroy the vaccine that may have expired, saying it is still usable.

“And it’s also a requirement that every vile manufactured, has an expiry date beyond which it cannot be used," said Dr. Charles Mwansambo, Malawi’s secretary for health.

"In this case, we cannot proceed to use these because the vial clearly states the expiry date. And any doctor, any physician would not be forgiven in the event of anything happening after knowingly used a vial that is clearly having labeled as having expired.”

The expired vaccine is part of the 102,000-dose donation the country received in March from the African Union. Malawi and South Sudan earlier announced plans to destroy about 70,000 doses of the AstraZeneca vaccine that expired last month. The expired were donated by African telecom giant, MTN.

Mwansambo also said using the expired vaccine would scare people from taking the jabs from the remaining stock.

“If we leave or store these expired vaccines that will be big blow to our vaccination drive people will not come. Now even though we are not using them people have been hesitant to come because they feel that we might be given the expired vaccines,” he said.

Mwansambo said the country may be considering extending the shelf life of the remaining stock of vaccine received through the COVAX facility and from the Indian government that expires in June and July.

“We can have phobia from Malawians which we should not. If the [expired] vaccines are safe, the CDC can take the expired vaccines, or WHO, and donate to the developed countries. But we have to witness the day the vaccines are leaving Malawi.”

First of all, why does the manufacturer provide for an expiry date, to me it means the vaccines would have become less effective or not effective at all or even poisonous.

You see, WHO can easily make such a recommendation because the would be consumer is an African Country.

Just assume it was one of the European countries, would they make such a pronouncement, the answer is no. Malawi being third world must be encouraged to be injected with poisonous vaccines. These guys want to use covid 19 to finish us all
Report to administrator
0 #2 kabayekka 2021-04-26 03:26
Well then the government of Malawi should load up the expired COVID19 vaccine and take it back to the manufacturers as soon as possible.

Since it is not as dangerous as anticipated, well the technology that made the drug should be able to upgrade it or to recycle it.

One understands that even the coming year of 2022, the world population will continue to receive another vaccine antiviral treatment of this dangerous flu plague.
Report to administrator
0 #3 kabayekka 2021-04-26 16:35
WADADA please do not be silly a bit. Africa has got into this sort of habit of lamenting world conspiracy against this continent.

Watch out for the immense corruption that is being done by Africans against Africans. The medical elites of the African Union and the Malawi medical administrators never sat down to sort out exactly how much vaccine should initially be exported into the country of Malawi.

If Malawi required a million tubes of vaccines, about quarter should have been exported first. So that the Malawi medical administration system could try to start the slow process of vaccination.

Afterwards, a new staff meeting could sit down and make the next move. It is only about 8 hours of airways flight to import a new up to date COVID19 vaccine form abroad manufacturers.
Report to administrator
0 #4 kabayekka 2021-04-26 16:43
Malawi administration should now pay up for the destruction of such expensive drugs that have gone to waste.

It seems that the manufacturers of this vaccine have so far done a great job of making a flu vaccine to try and save many lives.

If Malawi is unable to compete in these hard times and instead of saving its population from this epidemic they are instead destroying the drug well what can one say?
Report to administrator