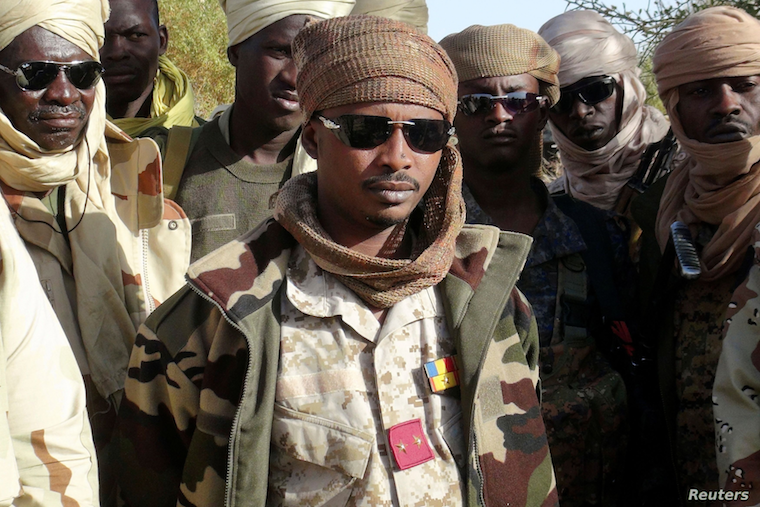 The son of the late President Idriss Deby Itno of Chad has been named interim president of the central African nation by a transitional military council.

Wednesday’s announcement comes a day after 37-year-old Gen Mahamat Idriss Deby Itno was named head of the 18-month council as the army announced the death of his 68-year-old father from injuries sustained while visiting troops on the front line.

A rebel force known as the Front for Change and Concord in Chad, known by its French acronym FACT, has advanced from the north in recent days toward the capital, N’Djamena. The group had been based in neighbouring Libya. The rebel group released a statement Tuesday vowing to take the capital and depose the younger Deby.

“Chad is not a monarchy,” the statement read. “There can be no dynastic devolution of power in our country.”

A day before his death, the elder Deby was declared the winner of Chad's April 11 election with 79 per cent of the vote, giving him a sixth term in office. Most opposition groups had boycotted the poll, citing arrests and a government ban on opposition rallies.

Deby had ruled Chad since coming to power in a December 1990 coup, making him one of Africa’s longest-serving leaders. Opponents called him an autocrat and criticized his management of Chadian oil revenue. In 2008, a different rebel force reached N’Djamena and came close to toppling Deby before French and Chadian army forces drove them out of the city.

In the West, however, Deby was seen as an important ally in the fight against Islamist extremist groups in West Africa and the Sahel, like Nigeria-based Boko Haram.

The Libya-based FACT had attacked a border post on the day of the election and then moved hundreds of kilometres toward the capital. On Monday, the Chadian army said it had inflicted a heavy loss on the rebels, killing more than 300 of them.

There is nothing genetically superior in Idris Deby's dumb son to suggest he is 'most qualified to lead Chad even for a day.

This is a desperate military scrambling to protect their rule nd buy time to consolidate power in another wanabe autocrat. All well meaning Chadians must reject that nonsense and kick the idiots out.
Report to administrator
+1 #12 Akot 2021-04-24 18:43
Quoting Kabinda:

Autocratic monarchies should have no place in Africa's future.

There is nothing genetically superior in Idris Deby's dumb son to suggest he is 'most qualified to lead Chad even for a day.

This is a desperate military scrambling to protect their rule nd buy time to consolidate power in another wanabe autocrat. All well meaning Chadians must reject that nonsense and kick the idiots out.

Don't forget the family has been in power for 30 years & Chadians have not been educated to look at their country differently!

Uganda will be in the same situation as there is no National Call, no National Leadership, while Museveni's son is ready to continue the family business!

Without bringing down the tribalistic system & UNITY, Ugandans can form Independent Tribal States that will leave Museveni/family OUT!
Report to administrator
0 #13 Akot 2021-04-24 18:55
Kabinda,

Gen Mahamat Idriss Deby Itno was 7 years old when his father took over in a military coup, so was raised to take the dad's place.

How old is Museveni's son & how old will he be when the father dies & leaves him the post?

72 year old prince Charles is still waiting for his mother to leave him the crown & the way she talks, it's as if she isn't aware she's old, but just lost her husband, too soon!

40 years of Museveni assured so, what are Ugandans hoping Museveni does for them?
Report to administrator
0 #14 Akao 2021-04-25 15:45
I wonder when museveni is going to visit troops and not come out. Updf work magic please!

Muhoozi can notbe every where.when he is not around, work your magic to save Uganda
Report to administrator
12