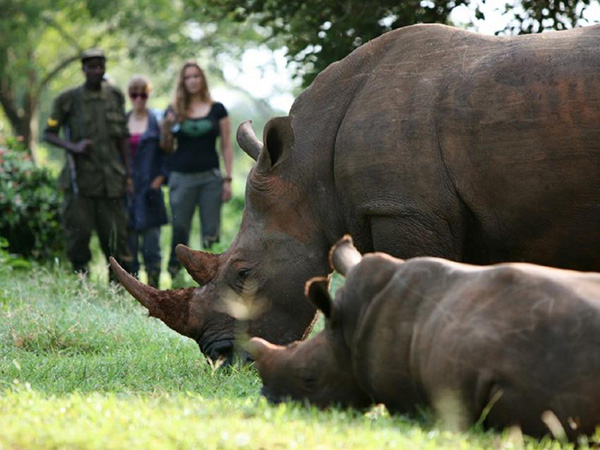 The decision comes amidst bickering between Ziwa Rhino and Wildlife Ranches (ZRWR), which owns the land hosting the sanctuary and the Rhino Fund Uganda (RFU), a non-governmental organization that manages the rhinos.

A press statement issued by UWA says Ziwa sanctuary has been closed to the public and no tourism activity will be undertaken until further notice. Ziwa sanctuary is home to 33 endangered white rhinos. According to the statement, the closure was prompted by the misunderstanding between ZRWR and RFU.

The statement notes that UWA realized that the conflicts could potentially compromise the safety of the rhinos and they took the decision to avert the threat as a temporary measure till the parties involved settle the matter. UWA also says that it has taken over the security of the sanctuary, which is within its mandate to protect wildlife resources in Uganda as per the Uganda Wildlife Act 2019.

The development comes a few days after 28 men pretending to be tourists raided the sanctuary on April 15, 2021, and destroyed office property in what is believed to have an attempt to evict the staff of Rhino Fund Uganda. The suspects have since revealed that they were hired from Kampala to execute the mission. Isah Ssemwogerere, the Savannah Regional Police spokesperson, says that the suspects face charges of aggravated robbery, theft and malicious damage to property.

Captain Joseph C. Roy, the proprietor of Ziwa Rhino and Wildlife Ranches (ZRWR), which sits on over 16,000 acres of land ordered UWA and RFU to relocate the rhinos and vacate his land over alleged failure to cooperate with him. But Augustine Mudukoyi, the general manager of Rhino Fund Uganda said that they tried to settle the misunderstanding by agreeing to all the demands by Captain Roy - offering to give him 20 per cent collections and appoint three of his members on its board.

Mudukoyi instead accuses Roy of making fresh unrealistic demands, which include 100 per cent collection and relocation of the executive director, Angie Genade from the sanctuary to their Kampala headquarters. On Friday, UWA announced plans to relocate the rhinos from the sanctuary to its protected areas following the completion of a feasibility study to identify a suitable location and the required conditions.

In 2002, Roy offered the land to act as a sanctuary for the rhinos for a period of 30 years. However, in October 2017, he terminated his MOU with RFU. In 2020, after a series of meetings with President Yoweri Museveni and the ministry of Tourism, the two parties signed a fresh five-year memorandum of understanding for the continuation of the flagship project.

However, in March this year, Roy laid down fresh demands and on April 15, 2021, he stormed out of a meeting called by the ministry of Tourism and UWA, saying he is no longer interested in talks but wants his land back. It is reported that over 10,000 tourists visit Ziwa Rhino Sanctuary each year.

These animals should not be used as a cover for ulterior motives; they can be more comfortable in their right habitat, the National Parks.
Report to administrator