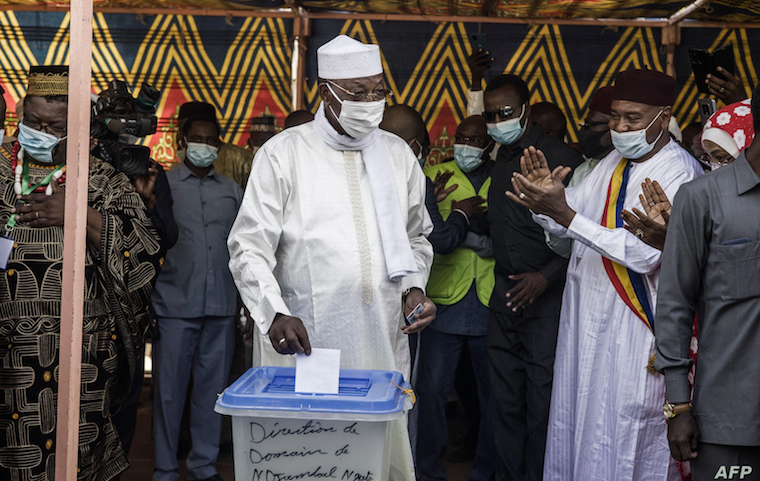 Chad’s army says President Idriss Deby has been killed in clashes with rebels, ending his 30-year grip on power in the Central African nation.

Speaking on state television Tuesday, an army spokesman said Deby died of injuries sustained while visiting troops on the front line. A rebel force known as the Front for Change and Concord in Chad (FACT) has advanced from the north in recent days toward the capital, N’Djamena.

The government and parliament have been dissolved, and the army spokesman, Azem Bermendao Agouna, said a military council will take charge of Chad for the next 18 months. He said the council will be led by Deby’s 37-year-old son, General Mahamat Idriss Deby Itno.

Earlier, AFRICOM said it is “closely monitoring the rebel incursion in Chad,” while the U.S. Embassy in N’Djamena ordered employees to shelter in place, citing the potential for unrest.

The 68-year-old Deby had ruled Chad since coming to power in a December 1990 coup, making him one of Africa’s longest-serving leaders. Opponents called him an autocrat and criticized his management of Chadian oil revenue. In 2008, a different rebel force reached N’Djamena and came close to toppling Deby before French and Chadian army forces drove them out of the city.

In the West, however, Deby was seen as an important ally in the fight against Islamist extremist groups in West Africa and the Sahel, like Nigeria-based Boko Haram. Former colonial power France hailed Deby on Tuesday as a “courageous friend” and “great soldier” who tried to protect his country. The statement urged the post-Deby transition take place under “peaceful conditions.”

Chadian opposition leader Saleh Kebzabo told VOA’s French to Africa service that he was surprised to learn of President Deby’s death and called for talks to solve the country’s issues.

“We think that, in this kind of situation, one should refrain from precipitous decisions. One should make time for concertation, time for unity and understanding, so that Chadians can look at the future in the same direction," he told VOA. "

It is also the occasion to recall that, last week, political actors, including myself, and those of civil society groups signed a common statement titled ‘Joint Statement for an Inclusive Dialogue.’  So, the time for dialogue is now, the dialogue opportunity is here. Chadians must get together right away for such dialogue.”

On Monday, Deby was declared the winner of Chad's April 11 election with 79 per cent of the vote, giving him a sixth term in office. Most opposition groups had boycotted the poll, citing arrests and a government ban on opposition rallies. His campaigner said Monday that Deby was going to the front line to join army troops battling what he called terrorists.

Libya-based rebels, known by their French acronym FACT, had attacked a border post on election day and then moved hundreds of kilometres toward the capital.  On Monday, the Chadian army said it had inflicted a heavy loss on the rebels, killing more than 300 of them.

A different rebel force reached N’Djamena in 2008 and came close to toppling Deby before army forces drove them out of the city.

+3 #1 Lysol 2021-04-20 19:28
5 things Chad has in common with Uganda.
#1 Both of their presidents were "elected" for the 6th
term, to rule for life.
#2 Both of their leaders are darlings of the
Western powers
#3 Both of their leaders got involved in endless wars
against jihadists
#4 Both are military generals and so are their sons who
are waiting to take over after their death.
#5 Both countries have oil.
The bottom line is what goes around always comes around.
Report to administrator
-7 #2 Wainanchi 2021-04-20 23:24
@Lysol..Both president's are good people ,patriots and soldiers, not cowards.It is greatest honor to die in the battlefield giving your life to the country you serve.

RIP in peace courageous president Idriss Debt.
Thank you for defending your country and to die as hero and not like slave and sold soul.You gave outstanding examples as one of the great African heroes .
Report to administrator
+1 #3 ugthinker 2021-04-20 23:37
just another embarrassment to all of us africans before the rest of the world.

just another embarrassment to all of us africans before the rest of the world.

How I wish our leaders could rethink their outlook!

Leaders only think & act correctly if 'the people' force them to do so, in UNITY!

The late Chadian president was just reelected to ensure his 40 years, just as Ugandans did for Museveni!

But Museveni has no tribal land in Uganda & can be got rid of & this MUST be before he drops dead & leaves the seat to his son!

Why are Ugandans ensuring Museveni's rule, knowing his son is in waiting to take the father"s place?
Report to administrator
0 #8 Akot 2021-04-21 20:19
Quoting Akao:

Agree, I don't know when we will get rid of our dictator. All of them should disappear so that Africa can start to develop

Africans alone, in UNITY, can stand up to their useless rulers & ensure change & real governance!

African rulers are the richest in the world & only the people, in UNITY, can stop them, then enusre they are respected after!

Ugandans MUST give themselves chance as the country is formed by their tribal lands & land riches belong to them & not to Museveni & family who are assured of ruling/owning Uganda for good!
Report to administrator
0 #9 Akot 2021-04-21 20:31
kabayekka, well stated, but,

Idriss Deby came to power through military coup 30 years ago & was assured of post through elections!

The jihadists fighting Idriss Deby are more dangerous, reason France...prefered supporting him instead of the islamists who want to replace him!

But, once UNITY or Independent Tribal States leaves Museveni powerless, who will fight Ugandans to whom tribal lands belong?
Report to administrator