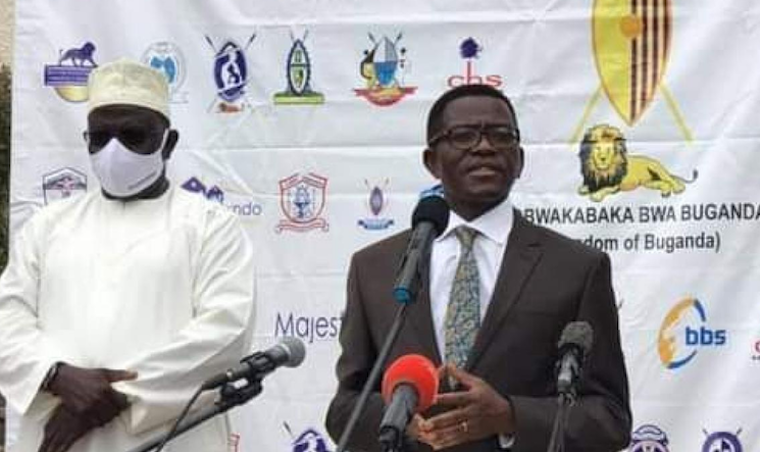 The Kabaka of Buganda Ronald Muwenda Mutebi II wasn’t poisoned but rather got an allergic reaction from wearing masks and face shields, Katikkiro Charles Peter Mayiga has said.

Speaking for the first time after a seemingly frail Kabaka appeared in public early this week to celebrate his 66th birthday, Mayiga admitted that in the last few days, the Kabaka has been having health challenges which he said are being managed by his doctors.

The statement comes after videos showing the Kabaka in a manner that suggested that he was in extreme pain and struggling for breath made rounds on social media, with some people alleging that he might have been poisoned. This appearance came just weeks after speculation about his health.

Our kabaka is sick. Please @cpmayiga come out and explain this. What is happening. pic.twitter.com/GWzySWLeQY

While some people wondered why officials at Mengo allowed the Kabaka to appear in public while he was sick, Mayiga said that if he had not showed up for the celebrations, still people would have asked questions why he had stayed away.

On the people who are calling for Kabaka to be taken abroad for proper management of his health, Mayiga said his doctors who are specialists in what they’re doing believe his situation can be handled here. He wondered why people would think that those around the Kabaka don’t care about his welfare to know which kind of treatment he needs. Mayiga called upon people to disregard online calls to fundraise for the Kabaka to go abroad for better health management.

Mayiga also confirmed the authenticity of a video that made rounds on social media yesterday showing the Kabaka at Capital Shoppers supermarket in Ntinda.

“When he wants certain personal things he himself goes to the supermarket and picks them and he went and picked them and people saw him walk normally. I‘m hoping that will reassure you about his health,” Mayiga said.

Today the Kabaka and his wife Sylvia Nagginda got vaccinated against coronavirus and he did not appear as frail as he'd looked earlier this week.

Foods and drinks of a leader are always tested before being served. That man is slowly dying and should seek treatment abroad, immediately,if not too late already.
Report to administrator
+2 #12 kambarage 2021-04-18 03:15
Quoting Kalibbala:

Charles Peter Mayiga Muloddo Kaayi We do not need Your Explanations about Kabaka's Health Do us One Favor !

Arrange for His Treatment Outside Uganda! Cyprian Kizito Lwanga was poisoned that is Why SFC and All Interahamwe Militia are Guarding his Home and Intimidating the Family!!

Nuuhu Muzaata poisoned, Anas Kaliisa poisoned! Stay Warned if the Kabaka Dies We Will Hunt For You All around the Globe with Your Bavandimwe Killers..!! This time around even if you kill 5.000.000, One will be yours..at the End Uganda will have peace..

The Tutsi plan to overrun Buganda is in overdrive. Investigations should be made on Prince Junju's monther Venetia Sebudandi - a powerful tutsi in Paul Kagame's government.

She wants her son to be Kabaka, not Ssemakokiro!!!

Eh...excessive speculation is a disease of the mind.
Report to administrator
+4 #14 Uhuru 2021-04-18 10:52
Peter, you needed to have come up with a better lie. What we saw is not how someone with allergy looks like.

What we saw is someone who has been ill for a long time. You should have sought the services of a medical doctor to come up with a better lie; if you can find a doctor willing to tell a lie that is.

Kabaka is now 66 years old; how come we have never heard of him suffering from an allergy of this kind. Nonetheless; I wish the Kabaka a quick recovery.
Report to administrator
+2 #15 Wooden K. 2021-04-18 12:24
Information for Wadada & Miki

So , yes , its possible that the Kabaka had all these symptoms. I
It is also evident that he is responding to treatment.

But there is no need to get irritated over fakery and bogus "breaking news". The truth is tough to hide.

I am sure you have watched the video that was recorded when Ssabajja Kabaka arrived for the function. He gave a speech thanking his chiefs for the tent they had donated to him .(This bit was not not shown to the public untill 48 hours later)

Ten minutes later , he got a mild allargy attack .( This is what was covered by the media) They only said that the Kabaka was soooooooo sick he couldn`t even talk !!!!

A day later , the Kabaka had his morning walk around his place , and later went shopping in Seta.

At the same time , fake news operators were at it saying that the Kabaka was in intensive care somewhere in Nakasero.

They later adjusted and claimed that Baram had faked the super-market video.

Even if it was an ordinary person, why would he/she lie? That's why Mayiga came up with the allergies version. And Mayiga blamed it on the masks!

That way he didn't need a doctor, however, he said that Kabaka is receiving treatment from the specialist doctors and responding well to it. A picture tells a thousand words!

Kabaka's physical appearance told us a different story, he is not well at all. Kabaka urgently need more specialist than those attending to him at the moment.
Report to administrator
12