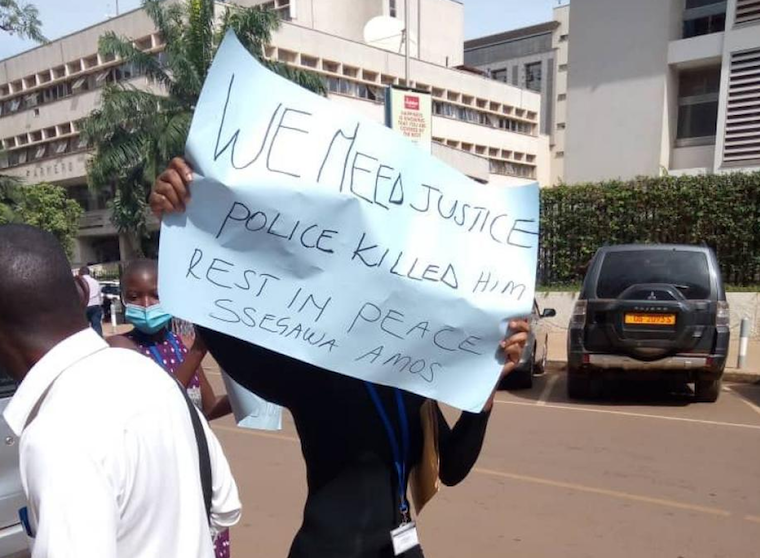 Hajjarah Nakitto is demanding justice for her son

A mother whose teenage son was shot in the mouth and died during the November 18-19, 2020 riots is demanding Shs 2 billion compensation.

Hajjarah Nakitto on Monday staged a lone protest at the gates of parliament seeking justice for her 15-year-old son, Amos Ssegawa. Dressed in a black dress, Nakitto held a blue placard written on “We Need Justice, Police Killed Him, Rest in Peace Ssegawa Amos”. She marched from Food Hub along Kampala road to the gates of parliament weeping.

She said that her son was innocently killed during the riots by security forces and since then, she has never been compensated. She says no one has ever approached her regarding compensation or taken a statement from her, and because of the subsequent depression, she got fired from her job.

Police guards at parliament blocked her and confiscated the placard she was carrying. They directed her to proceed to the next gate despite her insistence on meeting the speaker of parliament Rebecca Kadaga, whom she said would take her to President Yoweri Kaguta Museveni who promised compensation for the riot victims.

On November 30, Museveni said the government would compensate families of those killed during the city protests. He said the people who died on the November 18th, 2020 riots would be divided into victims and rioters. Over 54 people were shot by soldiers during the riots.

The president said, among those killed, 32 were rioters and 22 were victims whose families were to be compensated. Protests erupted countrywide following the arrest of then-presidential candidate Robert Kyagulanyi aka Bobi Wine.

Nakitto says that she doesn’t mind the silence of other families, insisting that she cannot keep quiet considering the pain she goes through every day and night ever since she lost her son.

According to Nakitto, Ssegawa was killed by a stray bullet in Kisenyi as he scampered with him to board a taxi in Usafi Taxi Park to escape the riot.

“He was shot in the mouth and fell down. We were trying to save our lives,” Nakitto said.

She says she had high hopes in her son who was in senior two at Lubiri high school. He was a footballer featuring in the school team with high hopes of joining the national team.

After entering parliament, Nakitto said that she wasn’t able to meet Kadaga but was asked to write a letter requesting to meet the speaker and attach all files of the case. Senior presidential press secretary Don Wanyama said he didn’t have details about the compensation.

“I need to cross-check but usually such compensation would be through the security agencies,” he said.

Atleast let them lie to this poor woman that they are doing something on her case..But to unleash police on her while they enjoy AC in their offices is simply unAfrican.

When someone loses their loved one, you should have courtesy to comiserate with them not to unleash your dogs to beat them up and humiliate them
Report to administrator
0 #2 Kalani Jonathan 2021-04-14 13:20
We all need some kind of compensation. It has been terrible.

I have never been the same since 2016 when the people who were in our palace were killed by UPDF combined with police.

Our relatives have disappeared and we can't trace them. I wonder if our soldiers are professional enough for their tasks.
Report to administrator
-2 #3 kambarage 2021-04-15 07:04
Why doesn't she go to Kyagulanyi's office since he is the one who mobilized the rioters?

That was the original cause of her son's death?
Report to administrator