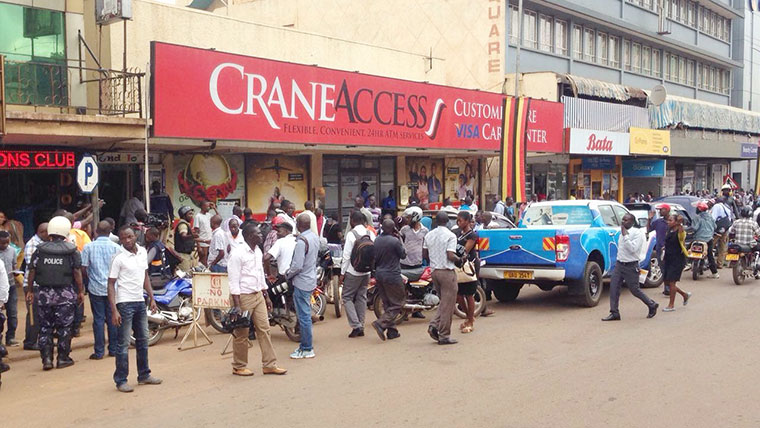 At least 400 former employees of Crane bank Ltd have petitioned the High court in Kampala seeking orders to compel dfcu bank to produce documents that were allegedly withheld by the bank after their dismissal.

The group was employed by Crane bank until October 2016 when Bank of Uganda (BoU) announced its closure and later transferred its assets to dfcu on grounds that it was undercapitalized. BOU governor Emmanuel Tumusiime-Mutebile said then in a statement that Crane bank was incapacitated, and posed a systematic risk to the stability of the country's financial system.

Following the takeover, dfcu terminated contracts of the 400 staff formerly employed by Crane bank for alleged incompetence that resulted in the collapse of Crane bank. But the former employees, represented by ten of their former workmates went to court demanding reinstatement, an order for payment of their wages and allowances among other benefits.

They argued that their dismissal was characterized by fraud, breach of duty, bad faith and negligence and that the takeover of the bank hitherto owned by business mogul Sudhir Ruparellia was concealed to them and in the process, their employment rights were violated. However, the matter was referred for mediation, which yielded no results after dfcu allegedly insisted that the termination of their contracts was done fairly.

Now they have returned to the Civil Division of the High court in Kampala seeking orders to compel dfcu to produce and permit them to inspect and make copies of 20 documents before the hearing of the matter can commence.

The documents include the purchase of assets and assumption of liabilities agreement between BOU and dfcu, written notices of resignation letters by the staff in question, contracts by employees retained by dfcu that were revised to ensure pay and benefits parity with the bank's employees and documents to show that dfcu didn't underpay those picked from Crane bank compared to their pre-existing employees.

The other documents include the list of employees allegedly laid off for incompetence, termination letters, documents to show that they were paid appropriate termination packages including re-allocation allowances among others. Their lawyer Isaac Ssemakadde says that the discovery of the mentioned documents is a process that helps them to prepare properly for the trial.

In the aftermath of the takeover, Crane bank chairperson Joseph Briribonwa accused BoU of premeditating the closure and sale of their bank. He said that while the bank was faced with a liquidity crisis that was caused by the economic downturn in 2014/2015, its shareholders had raised capital amounting to $8 million, which funds were withheld by BOU. He added that the central bank frustrated all the efforts of Crane bank to sort out its liquidity crisis and instead sold it to the preferred bank.

Meanwhile, Sudhir has also demanded that BOU returns the closed bank’s bad loan book which he said is valued at Shs 570 billion. Sudhir said that the impression from BOU that dfcu bank paid for the bad loan book at Shs 200 billion is false.

Sudhir is also seeking a market valuation of assets and liabilities sold to dfcu as well as a valuation of the goodwill that dfcu benefited from taking over Crane bank’s branches.

+1 #1 kabayekka 2021-04-10 16:48
Interesting economics indeed. After loosing money with a regime that could not help the situation at all five years ago, those responsible for such a loss are back to business as usual during 2012, as if nothing ever happened at all? It seems that this country is paved with gold.
Report to administrator