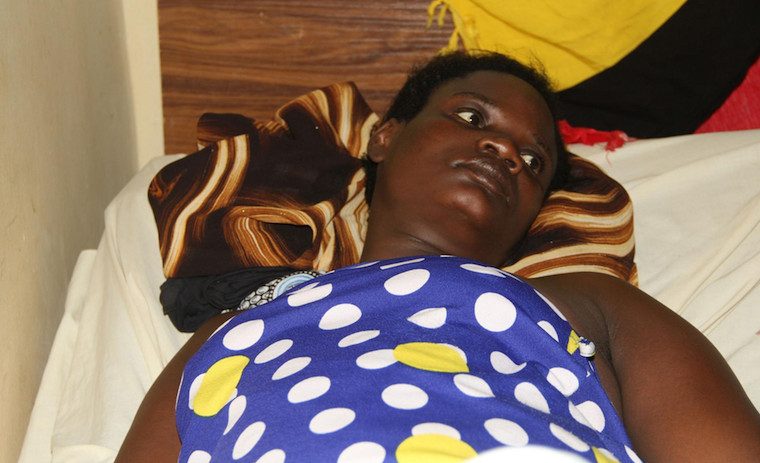 It has been a terrible Easter holiday for an innocent 37-year-old woman and her family members traumatized with anxiety as medics failed to trace a bullet, police accidentally fired into her body a week ago.

Whereas, the bullet evidently entered Mary Achan's thigh and with no sign that it exited her body, medics are baffled as to why they cannot find it inside her body.

The victim of the police stray bullet is a resident of Budhumbuli village in Northern division of Jinja city and was shot and injured by a stray bullet while seated in a commuter coaster taxi on her way home from Jinja town last Tuesday.

Achan was shot by police officers who were attempting to arrest suspected rowdy youth in Bugembe trading centre. The suspects were allegedly resisting arrest, prompting police to employ teargas and live bullets in a bid to subdue them, but they instead ended up shooting Achan during the scuffle.

Achan sustained injuries in the left thigh area and was admitted at Jinja regional referral hospital Ward 9, where her wound was cleaned and X-ray investigations conducted. However, they failed to trace the location of the bullet within her body.

She was then discharged on Thursday last week but after experiencing aching pain in her femur, Achan resolved to seek further help from Unity Medical Center where she is receiving antibiotics aimed at relieving her of the persistent pain.

Achan told URN that on Thursday she sought medical attention from a private clinic after realizing that the wound was rotting away.

“Although health workers at the Jinja regional referral hospital discharged me and directed me to report for medical checkups every after two weeks, I realized that not only was I feeling a lot of pain but the wound was also rotting away...So I had no option but to seek help from this orthopaedic clinic for further management,” she says.

Angella Yavurwa, the victim’s mother says that despite their efforts to have her daughter fully recover, they are worried over the doctor’s failure to trace the bullet or its’ fragments within her body. Yavurwa further reveals that their family is unable to pay the Shs 3.5 million bill which is required by the orthopedist before conducting surgery on Achen’s thigh.

It is a matter that forensic experts of the police force whose (missing) bullet hit Achan would be expected to take urgent interest in. One of the orthopaedic surgeons attending to Achan, Ronald Ssembuya says that all the available X-ray studies indicate that there was an entry bullet wound but its’ exit cannot be traced, which raises suspicion that the bullet is still lodged in the victim’s body.

Ssembuya stresses that Achan’s hip area was completely immobilized and she requires urgent surgery so as to prevent possible damage to other body parts. It is a precarious situation when a case that has defeated the regional referral hospital is taken up by a local clinic

0 #1 kambarage 2021-04-06 04:26
First mistake was to go to private clinic. The patient should seek professional help from the orthopedic department at Jinja referral hospital or get referral to Mulago.

Otherwise the bill at the private clinic will rise and police will not be able to clear her bill.

Most of these clinics are also run by medical students as the real owners work in the big hospitals. So the chance that the doctors can't find the 'bullet' because of inexperience is high.
Report to administrator
0 #2 Peter Okelo 2021-04-06 08:32
I think the patient should be taken to Soroti. Soroti hospital is now the place to go.

I believe they are the most dedicated team of doctors we now have in Uganda.
Report to administrator
0 #3 WADADA rogers 2021-04-06 15:21
If it is not incompetence on the part of the medics, then the bullet never entered the body.

A bullet is not a pin for it to disappear into the tissue or borne, it is far bigger than a nail, to say the medics cannot trace it in the body when it is actually there is is a mockery of the medical profession,.
Report to administrator