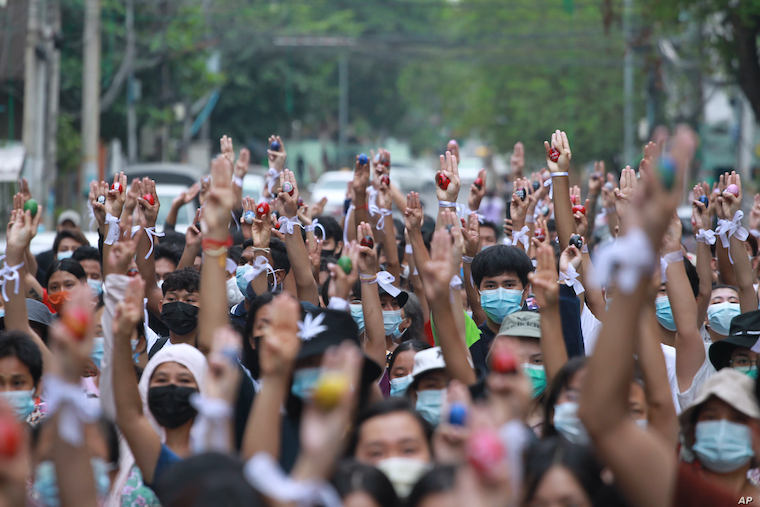 Myanmar protestors on the streets staging the Easter egg protest

Demonstrations against military rule continued in Myanmar Sunday, with many protesters using Easter eggs to aid their movement.

Eggs bearing slogans such as “Spring Revolution” and “We Must Win” as well as drawings of a three-finger salute were in the hands of thousands of protesters across Myanmar Sunday, in a nod to the Christian holiday.

Protesters began taking to the streets after the February 1 coup by the military, in which de facto leader Aung San Suu Kyi, President Win Myint and other government leaders were arrested. Hundreds of people have been killed in violent crackdowns on protests over the past two months, according to media and other accounts.

The Assistance Association for Political Prisoners, a nonprofit human rights organization based in Myanmar, has tallied 557 deaths and more than 2,750 arrested since the protests began.

On Sunday, protests drew thousands into the streets in Yangon and Mandalay, among other cities. Local news outlets reported that security forces opened fire on a crowd of protesters in the city of Pyinmana in central Myanmar, killing at least one person.

In Naypyitaw, the capital, police fired on protesters on motorbikes, killing two men, the Irrawaddy news site reported. One man was killed earlier in the northern town of Bhamo, the Myanmar Now news outlet said. Police and a spokesman for the junta did not answer telephone calls seeking comment.

During his Easter Sunday address, Pope Francis acknowledged the young people of Myanmar, praying for those “committed to supporting democracy and making their voices heard peacefully, in the knowledge that hatred can be dispelled only by love.”

Sunday’s so-called “Easter Egg Strike” is one of many themed protests over the past two months, including a “Flower Strike” in which protesters laid flowers in public places to honour victims of security forces. And a “Silent Strike” that left the streets of the country deserted.

“Easter is all about the future and the people of Myanmar have a great future in a federal democracy,” said Dr. Sasa, the United Nation international envoy for the ousted civilian government, on Twitter. A member of the Christian minority in what is largely a Buddhist nation, Sasa uses only one name.

“May this Easter bring the new hope and strength to United States of Myanmar,” he tweeted.

The junta, which had been turning off internet service at night, told internet service providers last week to shut down wireless broadband service until further notice, according to Ooredoo, one of several providers to report the move Thursday.

This internet shutdown was condemned by several dozen U.N. member countries via a statement written by Lithuania, France and Greece. Protesters have used the internet and their cellphones to publicize violent acts by security forces against protesters and to organize against military rule.