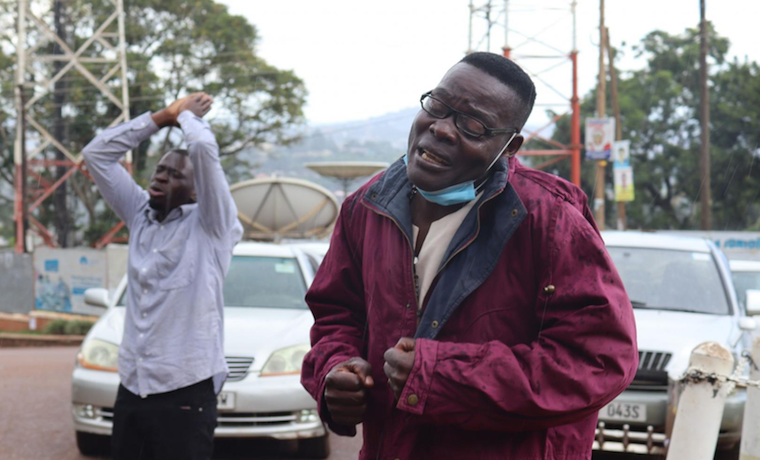 Some of the Catholics wailing at Rubaga Cathedral

Hundreds of faithfuls from different areas of Kampala have flocked Rubaga Cathedral, the seat of Kampala Archdiocese at the sound of prolonged church bells on Saturday announcing the sudden death of the Archbishop, Cyprian Kizito Lwanga.

The archbishop, who participated in the ecumenical way of the cross at Namirembe Anglican diocese on Good Friday yesterday was found dead in his bed in Rubaga on Saturday morning.

News of his death started as a rumour on social media but was later confirmed by Rev. Fr. Pius Male, the chancellor of Kampala Archdiocese. Thereafter bells started ringing as one of the ways of communicating the sad news to the faithfuls. A relatively young boy, selling sacramental items at the church, didn’t know the meaning of the bells and looked confused why the bells were ringing yet the church was closed.

However, elderly men and women doing the same job started wailing and crying while another started reciting the prayer for the faithful departed. Joseph Wasswa, one of those responsible for ringing bells at the cathedral, explains that they ring the bell differently to communicate a specific message to the faithfuls.

He says that normally, bells inviting faithfuls for mass or prayer are rung for a short time with several interludes in between them. He adds that those that are announcing bad news are continuous and ring for a long period. For instance, while announcing the death of the Archbishop, the bell rang from 1:23 pm to 2:30 pm.

Edward Ssentongo, an elderly resident at Butikiro road was among the many that came by leaps and bounds after hearing the bells. He says that he knew that these were not the usual bells and rushed to the cathedral to find out what had happened.

Several people including clerics dashed to the Cathedral both on foot, boda boda, and private vehicles shedding tears and gathered in the church compound as the bells continued ringing.

John Muwembe Kalanda, one of the contractors at the Archdiocese and personal friend to the deceased Archbishop, says that he was notified by his son who is in Mauritius about Lwanga's passing and called his sister to confirm the news.

Josephine Nagadya, a volunteer at the church, says that there was suspicious movement of priests around the cathedral from around 10:00 am. At first, she thought that they were arranging for the Easter mass only to learn that the Archbishop had passed on.

Lwanga, 68, has been the third Archbishop of Kampala ever since the Metropolitan see was created in 1966 when the pope merged part of the Diocese of Kampala and the Archdiocese of Rubaga.

Lwanga succeeded Cardinal Emmanuel Wamala in 2006 when the latter resigned after clocking the mandatory 75-years of age.

Before his appointment, he had served as the first ordinary of Kasana-Luwero Diocese. Born in 1953, Lwanga attended Kyabakadde primary school.

He entered Nyenga aeminary in 1964. Between 1972 and 1974, he studied at Katigondo National Major seminary before joining Ggaba National seminary for his theological studies. In 1978, he was ordained priest at the age of 25.

The following year, he was admitted at the University of Clermont-Ferrand in France, where he studied administration and languages. Later, he went to the Pontifical University of the Holy Cross in Rome, where, in 1994, he earned a doctorate in Canon Law.

The sound of the bell at Rubaga Cathedral announcing the death of Kampala Archbishop Dr Cyprian Kizito Lwanga. The bell rang from 1:23pm-2:30pm. Whereas the young faithfuls didn't understand the meaning of the prolonged bell sounds, the older faithfuls knew its true dark meaning pic.twitter.com/DFgg0LxgE7

0 #1 WADADA rogers 2021-04-04 10:39
The picture attached to this article is strange, are those comedians pulling off a public stunt
Report to administrator