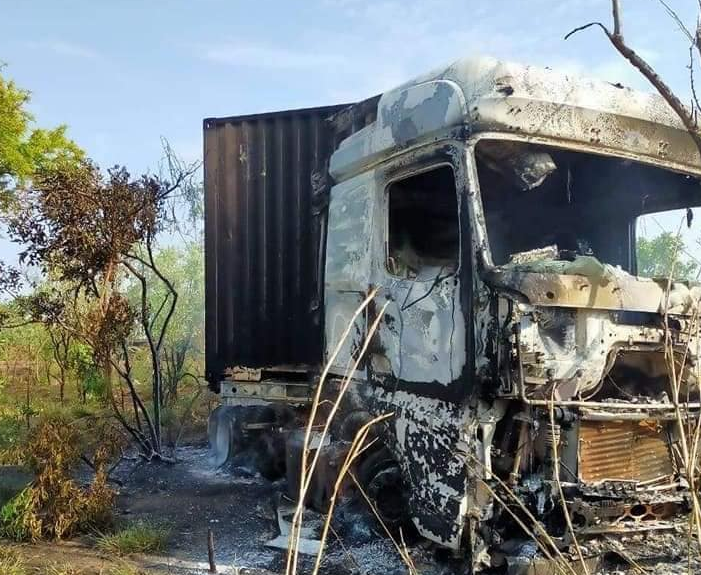 Five people were burned alive inside the trucks

Five people were burnt to deaths and three others injured in South Sudan on Thursday when gunmen ambushed a convoy of trucks returning to Uganda on the Juba-Nimule Road.

A military spokesman blamed National Salvation Front (NAS) rebels for the attack. A military officer at a checkpoint on the Juba-Nimule Road reported the three trucks were ambushed about 6 am in the Kit 2 area.

“The leading truck was shot but managed to escape the ambush with three wounded... but the other two trucks were burned, and within those trucks, five civilians were burned to death,” Domic told South Sudan in Focus.

Domic said the identities of the victims could not be confirmed because their bodies were burned beyond recognition.

“There are measures being taken for specialized forces to go there and try to evacuate the burned bodies and try to understand exactly what happened,” said Domic.

The South Sudan People’s Defense Forces (SSPDF) said it believes the National Salvation Front forces are responsible for the deadly attack because the rebel group allegedly carried out similar attacks on the same road in the past.

“According to SSPDF, they want to give a signal that they are there, and they wanted to confirm their presence in the area, but if there is any other reason, then they should talk for themselves,” Domic told VOA.

The NAS has repeatedly violated the cessation of hostilities agreement the group signed with the government, added Domic. Last week, the SSPDF accused the NAS of attacking people along the Juba–Kajokeji road, a claim NAS spokesperson Suba Samuel denied.

In a statement released Thursday, Samuel accused the SSPDF and its allied militia of looting, burning houses, raping women and killing civilians. In the last two weeks, SSPDF attacked NAS forces that were crossing into NAS-controlled areas, according to Samuel.

+6 #1 Mbeho Achuc 2021-04-02 19:52
And that exactly is the stupidity and mental backwardness that Africa is infested with, caused by Africans themselves!!!

Unless Africans and their leaders wake up , such uncivilized acts will continue !!

Most south Sudanese are still uncivilized savages' assume they aren't retaliating to the water truck that knocked and killed their female celeb in the week if the water truck belonged to a Ugandan company.

It takes one to know one. Observer you are a national newspaper with some pedigree. Please moderate some of the comments such as the one from Mpirima.