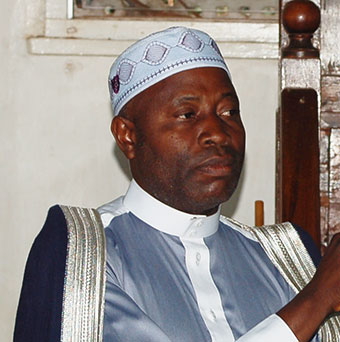 The leadership of Kibuli Muslim Community has confirmed the resignation of the Supreme Mufti Sheikh Silman Kasule Ndirangwa.

Speaking to reporters after Juma prayers, Sheikh Mahmood Kibaate, the deputy Supreme Mufti said that although they are yet to receive a formal communication, they have nevertheless leant about Ndirangwa’s resignation. He added however that his resignation will not affect the work of the office he has been serving.

Yesterday evening, news broke that Ndirangwa had resigned his position as Supreme Mufti which he has held for five years since 2015 following the death of the then Supreme Mufti Sheikh Zubairi Kayongo.

According to reliable sources, the executive committee of Kibuli had passed a resolution to sack Ndirangwa as Supreme Mufti.

“When he heard that a resolution had been passed to sack him, he moved very fast to announce that he had resigned to save face,” the source said.

On Wednesday at the funeral prayers of Hajji Musa Katongole at Kibuli mosque, mourners were left wondering why the Supreme Mufti was never recognized or given an opportunity to speak yet he was present.

Normally, he is the second last person to speak before he invites prince Kassim Nakibinge Kakungulu who is the titular head of Muslims in Uganda.

But during the prayers, it was Sheikh Muhammad Lunaanoba who was the last to speak before he invited Nakibinge. Among the speakers who spoke at the funeral, it was only the Katikkiro of Buganda Charles Peter Mayiga who recognized Ndirangwa.

It’s widely believed that tension Nakibinge was miffed when a team led by Ndirangwa met President Yoweri Museveni without the prince's knowledge. From the meeting, Museveni donated to them 11 four-wheel drive cars which they had allegedly asked for to ease their transport. The same number of cars was donated to the Old Kampala based leadership.

After the donation of the cars, Nakibinge reportedly ordered his people not to accept them and for more than a month, they were parked at Hotel Africana. But later these cars were distributed among the top leadership at Kibuli and they were allegedly registered in their names.

According to our source, all those who benefited from this offer are also facing the sack. Reporters who were itching to put these widely circulated claims to Kibaate were disappointed as he didn’t entertain any questions from the media, saying there will be a comprehensive statement after the College of Eminent Sheikhs has sat to forge a way forward.

The office of the Supreme Mufti was created in 2009 after a fallout with the Mufti of Uganda Sheikh Shaban Ramathan Mubajje over the sale of Muslim properties.

These greedy gentlemen should have gone to Saudi Arabia for such cars. There would not have been any problems for them.

No, Sir, It is a STANDARD & foolproof method of divide and rule strategy - the lizard / wall-ghekko strategy.

When being pursued by a predator, the lizard drops of its tail a decor to delay the predator, thus improving its chance to escape.

The Muslims are certainly divided by this car action, but we cannot yet be sure that some are still after their prey.
Report to administrator
+2 #12 Joe 2021-04-03 22:10
Mbu Kalibbala, Muteesa, name them! Don't bring your Tutsi-Hutu thing here! At least the so called Tutsi do not pretend to be Baganda!

Some time back, Hon. Nambooze said..they come to Buganda, take up Kiganda names, Emiziro etc but hold on their agendas, from wherever they came from (not the exact words).

True Baganda are decent people with no hatred for a people, they may hate you individually but not your people, so cut out your shenzi talk of Tutsi this or that.
Report to administrator
+2 #13 kambarage 2021-04-05 03:33
Quoting Joe:

Some time back, Hon. Nambooze said..they come to Buganda, take up Kiganda names, Emiziro etc but hold on their agendas, from wherever they came from (not the exact words).

True Baganda are decent people with no hatred for a people, they may hate you individually but not your people, so cut out your shenzi talk of Tutsi this or that.

By the way Nambooze is Tutsi...there are very few Baganda families in Mukono, most being grandchildren of Rwabugiri the famous king of Rwandans who traversed these areas reaching Mawogola and groups of them moved further ending at Mukono.

That explains the many Tutsi looks of majority 'bataka' of Mukono. Line them up and you will tell me.

Most of their grand parents could not speak straight luganda. And there is nothing special about Baganda anyway. They are as gullible, vulnerable, confused and worryingly selfish as any other African tribes.
Report to administrator
+2 #14 kambarage 2021-04-05 03:36
Quoting Sula:

The voting pattern in Buganda clearly showed the outrage of ordinally citizens about the regime of museveni.

Anybody dealing with museveni now ,directly or indirectly should know that He /she is rubbing pepper in the wounds that many Ugandans carry.

You will in the end be the losers...like it was in 1966. That Prince is taking the trend his father Badru Kakungulu wisely avoided...promoting Ganda nationalism against Unity of Uganda.

Great idea. He does not belong to that tribal clique of Kibuli. His mind is wider than theirs.
Report to administrator
0 #16 James Kasozi 2021-04-05 07:05
Properties (simply cars) should not be a source of rapture to the cohesive moslem leadership.