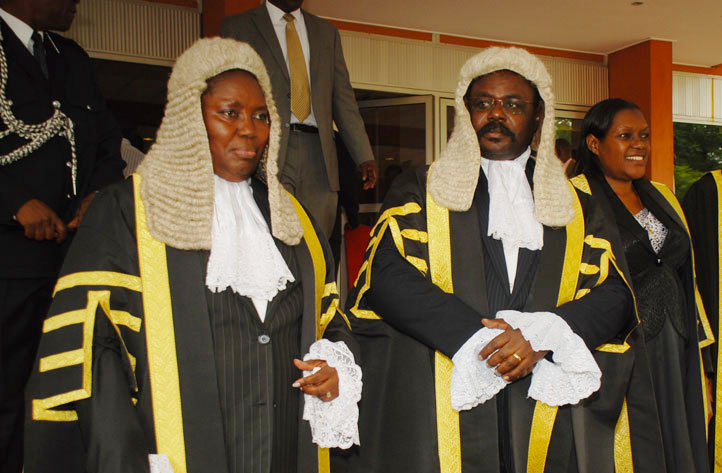 The speaker of parliament Rebecca Alitwala Kadaga and her deputy Jacob Oulanyah have been excluded from attending the ruling National Resistance Movement (NRM) party retreat for members of parliament at the National Leadership Institute Kyankwanzi.

Speaking to reporters on Thursday at the NRM secretariat along Kyadondo road in Kampala, Richard Todwong, the deputy secretary-general said that because of the tight schedule of parliament to pass the 2021/2022 budget before the May deadline, the two leaders and incumbent MPs who made it to the 11th parliament have been asked to remain behind.

The development comes less than a week after President Yoweri Museveni met both Kadaga and Oulanyah and allegedly asked them to stop campaigning for the speakership seat. It is understood that among the current members of parliament, both Kadaga and Oulanyah have unwavering supporters who most likely will not change their views on either candidate despite what the party leadership would tell them.

When asked about whether the issue of the speaker is one of the issues that will be discussed at Kyankwanzi, Todwong said it wasn’t part of the agenda.

“There will be a speaker in the 11th parliament [who] shall be elected by MPs at the right time. So let’s wait for the right time when members elect the speaker and you will know who it will be. The retreat is not about the election of the speaker,” Todwong said.

According to the program released today, MPs-elect who are not part of the current parliament will congregate at Kololo Independence Grounds for accreditation and testing for Covid-19.

Those who will be found negative will then be driven in buses to Kyankwanzi the following day where they will stay up to April 29. According to results from the Electoral Commission, 337 MPs were elected on the NRM ticket. Of these, 137 are incumbent members of the 10th parliament.

61 independent MPs are NRM-leaning, who, according to Todwong will be signing a memorandum of understanding to work closely with the party. Other than the 18 who are also part of the 10th parliament, the rest too will be attending the Kyankwanzi retreat.

Also, the 27 members of the Central Executive Committee (CEC) of the party and six members of the East African Legislative Assembly (EALA) will be part of those to attend. According to Todwong, the retreat is aimed at ideologically reorienting the NRM leadership to enable them to refocus on the social and economic transformation of Uganda and the survival of the African race amidst global challenges.

Asked whether this is not a form of political indoctrination, Todwong said the new MPs must understand the ideology of the NRM on which they were elected. At the beginning of each term of parliament or whenever there is an important decision that the party needs to make, MPs are normally summoned to Kyankwanzi where the president normally tells them the position they are supposed to take. It is expected that at the end of the retreat, the president will have shown his preference for who will be the party candidate for the position of speaker.

Oulaanya is simply a victim of the game but NRM's target is Kadaga, however had she tries, there is no doubt she will be discarded or has already been ejected. Oboth Oboth and Rwakojo are in

The Ö's are nowadays important to M7. O-O has a real chance to get into this sinking ship, if he wants to and of course at his own risks.
Report to administrator