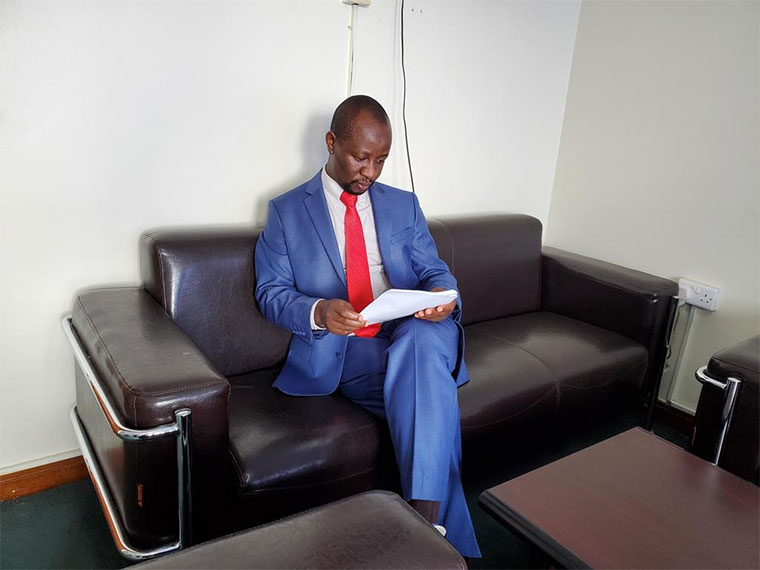 IBRAHIM SSEMUJJU NGANDA is running for speaker of parliament — his first bid for the third highest job in the country since he won the Kira Municipality parliamentary seat in 2011.

In an interview with Baker Batte Lule, Ssemujju acknowledged that he will have to walk a narrow and precarious path to victory but he is confident he stands a chance to win the influential job.

Do you stand any chance of being elected speaker of parliament?

The electoral college is 529 MPs. Each of these MPs has an interest and most likely it’s those interests that are going to determine how those MPs vote, and they are personal, not collective. Ben Wacha nearly became speaker against Francis Ayume when James Wapakhabulo went on to become NRM political commissar. [Muhammad] Nsereko nearly defeated Oulanyah; it had to take Museveni’s physical presence.

I have talked to MPs; they are many who think if Oulanyah or Kadaga wins, parliament is going to become a polarized institution. They will want to vote for someone who is not part of the quarrelling and fighting and I’m the only one at the moment who represents that. The two warring NRM factions will find comfort in working with me than with any of the two candidates.

I have written to all political heads to support my candidacy. The path is narrow but it can be expanded depending on the circumstances between now and the elections. Therefore, I’m going into this thinking that there is a possibility to win.

Is winning the only motivation for you?

The opposition has grown to 109 MPs. In a few days, you will see Museveni taking NRM people to Kyankwanzi; we will remain here. When they return, you will hear they have gone to Entebbe to agree on who becomes speaker. So, do opposition lawmakers want to fold their hands and turn into spectators of this political deal making?

In the 9th parliament, Hon Nandala-Mafaba and Odonga Otto stood for speaker and deputy speaker respectively; we supported them and they got the opposition votes. So, the opposition has a duty to field candidates.

If the opposition chooses another candidate who is not me, I will gladly give way because the opposition must field candidates. At the moment, I don’t see any other person; that is why I have o ered myself.

If we all say we are opposition, I’m also going to take a roll call, and see how many are still opposition in parliament. I don’t want people to deceive me. Even if it’s a secret ballot, the number of votes I will get will show me how many are in bed with NRM.

You have said there is paralysis in parliament but I have also heard people call you a polarizing figure...

The polarization I’m referring to is of two people who have built bases, I have not built a base in parliament. There are no people who are Ssemujuists – willing to die because they are my supporters.

People should read my reports; all MPs signed those reports because I knew and even now I know what to do as a leader. People should bank on me. When I become speaker, I will become speaker of parliament. I’m not going to behave the same way I behaved when I was a back bencher. It’s not possible. That transformation will certainly happen.

If you become, speaker how will you relate with government...?

There were six opposition MPs and 29 NRM MPs but the decisions were made by the committee. I never made them. I’m not going to be a speaker who issues directives or who makes decisions and passes them o as decisions of parliament. If NRM are the majority, and they win, I’m going to be like the judge.

There is no provision in the law that requires the speaker to exercise powers beyond those of parliament.

But you influence what gets to be determined by parliament...

You don’t; it’s abuse, which I have seen happen under the Hon Rebecca Kadaga. That’s why I was in court. The order paper is supposed to be written by the business committee but it’s being written by the speaker.

You don’t determine what parliament must do as the speaker; you only amend the order paper to accommodate government, not to accommodate yourself. That’s what the rules say. Do you remember any single decision that Wapakhabulo or Ayume made? Wapa enjoyed parliament, leaving the decisions to be made by MPs. What I will not tolerate is the abuse of parliament either by the speaker or any other organ.

You talk of Wapakhabulo but we know he was unpopular with Museveni because of the way he steered the sixth parliament...

If being a speaker is not such an important thing in determining what happens in parliament, why would Museveni remove him? As speaker, Wapa became extremely popular and people started looking at him as an alternative president.

Even meetings started sitting in parliament discussing how Wapa can replace Museveni as president. There was a time NRM historicals met at the parliamentary conference hall to discuss the future and Museveni came uninvited. He said the meetings were good and offered to host the next one.

So, Museveni started fearing Wapa. He thought he would become president. But with me, he knows straight away that I want to become a president and there is nothing to fear about me. With Wapa, he knew he was in his party and it was only him allowed to be president.

Public perception about Kadaga is that she’s a person who is acceptable across the political divide and your candidacy is looked at as threatening her chances. When you defy your party for some reasons, you will be popular.

So, when the public wants Kadaga, is she there? Didn’t she say the other day that she was the one who made Museveni stay in office? Isn’t that one of the most crucial issues ever made by parliament? So, on non-crucial issues, you will have Kadaga on the side of the population. On issues determining the destiny of the country, she will return to NRM and Museveni. Therefore, out of ignorance, there are people who think Kadaga is more opposition-leaning.

In the past, I have supported Kadaga because in parliament there are occasions when she has been a good speaker but there are also occasions when Oulanyah has been good but on the crucial issues, both of them have spoken the same language.

If she is doing Museveni’s bidding, why does it look like the NRM is fighting her? Is the NRM against her, I don’t know but I’m waiting for their processes and the candidate or candidates that they will bring and I’m sure the choice of their candidate will help me to win the speakership.

1- Kadaga and Oulanyah are fighting for the post , not to work for the betterment of Uganda but because the Office has benefits.

2- Kalekezi Kayihura among others ,attacked Parliament, attacked and killed in Kasese, Muzeyi supervised forces that entered and battered students of Makerere, Kandiho , attacked and battered journalists and is busy abducting and removing nails from innocent young men, Tunyefunza, Tumukunde etc behaved in the same way.

So if the group happen to compete for a position - How does it concern Ugandans ? above all it would be the most stupid if any Opposition leader got involved on the side of any of them.

3- So ,Kadaga/Oulunyah no difference one would rather throw the vote in a dustbin than give it to any of them.