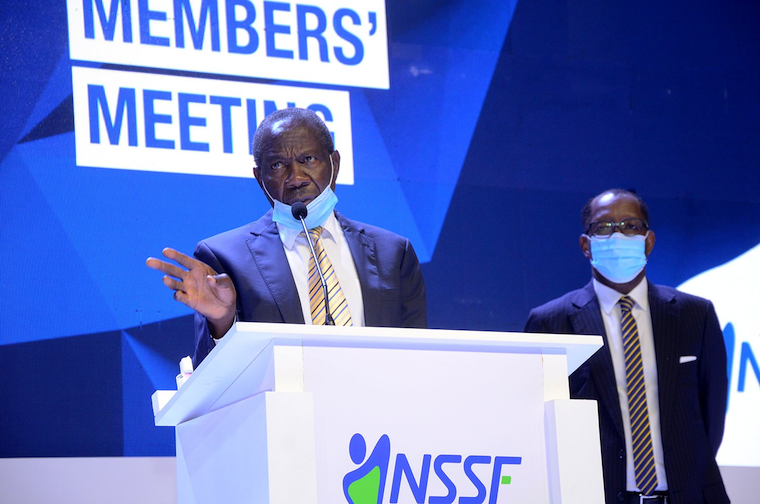 Savers notched a significant victory on February 17, after months of protracted battle, with the parliamentary passage of the National Social Security Fund (Amendment) Bill 2019.

The successful passage of the bill capped months of a tug of war in parliament between MPs and an executive determined to kill the bill. But after a perilous journey to victory, the minister of Finance Matia Kasaija launched a last-ditch effort to block the much-needed presidential assent to the bill, the last-major hurdle to be cleared to complete the transition into law.

The assented law would ultimately allow savers aged 45 years and above and those who have saved for a minimum of 10 years mid-term access to 20 per cent of their savings. But the minister, according to New Vision, recently wrote to the president asking him not to sign the bill into law, claiming the fund does not have enough money to pay out cash to eligible members.

According to NSSF, out of the 1.5 million savers, 180,000 are aged 45 years and above and 140,000 have contributed with the fund for more than 10 years. Kasaija argues that NSSF whose total value is Shs 13 trillion will need about Shs 2.9 trillion to pay savers who qualify for mid-term. The minister claims the Fund doesn’t have the Shs 2.9 trillion. NSSF would have to sell off its assets to mobilize that money, the minister claims.

Interviewed for this story, the chairman of the National Organization of Trade Unions (NOTU) Wilson Owere, a stakeholder who was consulted during the drafting of the bill, says Kasaija is telling a lot of lies to the president.

“Kasaija is talking of Shs 2.9 trillion needed to pay out members eligible for mid-term, which is not true. He is exaggerating that to scare the president so that he does not agree with the bill. He also assumed that every member saving with NSSF will rush for the money at once, which is not true and those are the figures he is using. People do not clock the required age (45 years) or the time they should have saved with the fund (10 years) all at once,” Owere said.

Owere said when top managers of NSSF appeared before the parliamentary committee, they assured parliament that they support the bill and they can afford to pay members eligible for mid-term access. Owere said NSSF managers said since they collect over Shs 100 billion per month from savers, they cannot fail to raise the money needed.

“Kasaija’s plan is to make workers hate the government and also fail the whole bill for his own personal interests… but I want to warn him that should the bill fail, they will know the wrath of workers,” he said.

Owere said the draft law is not only about allowing members have midterm access to their savings. He said it  has other benefits and, therefore, blocking it would be a blow to the economy, which is trying to recover from the adverse effects of Covid-19.

“The bill is also opening up for more membership in NSSF so that even employers with less than five workers can save and it has also opened up voluntary savings. The bill also opens up for people who work in the informal sector to save with the fund. This means that the fund will have a lot of money, contrary to what Kasaija is saying and I think his economic style of leadership has expired and I therefore want him to resign,” Owere told The Observer.

Owere also argued that the provision of mid-term access is in line with the president’s policy of getting people out of poverty and his commitment of securing the future of Ugandans because allowing someone to get part of his or her savings at 45 years when they are still strong will enable them invest wisely and by the time they get the remaining 80 per cent, they will be just boosting their investments and economic welfare.

Workers representative in parliament and vice chairperson of the Gender committee, which presented some of the amendments, Agnes Kunihira told The Observer that the consultation process involved everyone including the ministry of Finance although Minister Kasaija did not attend any of the meetings. She said all representatives from the ministry of Finance who attended were in support of mid-term access.

“Kasaija did not attend the consultation meetings about the bill but other officials from the ministry of Finance agreed with mid-term access and, therefore, it is surprising to see this turn around. But from what he submitted [to the president], he was giving wrong information; he took it as if all members saving with NSSF will get the 20 per cent [at once] which is not the case,” she said.

Kunihira added that if the president does not sign the bill and returns it to parliament, they will go through his reasons for not assenting to the bill. He said if the president rejects the bill, it will be very unfortunate because it was a bill presented by government, and not a private member bill.

Interviewed for a comment about the allegations, a furious Kasaija said, “Those saying that I have written to the president telling him to reject the NSSF mid-term access, what proof do they have? Do they have a copy of that letter? I do not want rumours,” he said before hanging up.

Efforts to reach out to NSSF about the matter were fruitless; however, according to their website in the ‘Frequently Asked Questions’ segment, the fund indicated that it has the money to pay members if parliament passed the bill.

“Yes, the Fund has money to pay members. The fund also has the infrastructure required to make such payments as soon as the bill is passed into law,” reads the response on the NSSF website. It also further indicates that the fund supports mid-term access by the members that are embedded within the NSSF (Amendment) Bill.

+1 #1 UGMasterslave 2021-03-31 07:37
The mafias pecking on this money from the dark are using kasaija to spread this propaganda PR so that the president gets concerned and rejects the bill.
Report to administrator
-1 #2 kabayekka 2021-03-31 12:59
NOTU has failed to have its members and the rest of the national workers to get a minimum living wage in this poor African country.

This dodgy union seems to think that all is well with the economy of this country. And if the workers who work hard to build this country every other day and try to save a few shillings out of the high taxation rate, will greatly benefit from NSSF rebates.

With the high inflation rate this country is experiencing, the COVID19 onslaughter, the high government expenditure of this long-serving government, the Uganda worker is going to continue to suffer economically.
Report to administrator
0 #3 Kasede 2021-03-31 16:01
Quoting UGMasterslave:

The mafias pecking on this money from the dark are using kasaija to spread this propaganda PR so that the president gets concerned and rejects the bill.

My experience is that the yearly inflation of the value of Ug. Sh. makes a nonsense of long term savings in that currency. 40 years is far to long. I support this bill, although I am no longer a beneficiary of it.
Report to administrator
+1 #4 Peter Odama 2021-04-01 15:25
This money has leakages and syphoned already in private in private offshore investments
Report to administrator
+2 #5 csw 2021-04-04 23:51
The age limit bill that benefitted 1 individual hardly spent 48hrs on Miseveni's desk, this bill that will change the fortunes of millions savers and dependants is gathering dust! Politicians are selfish!
Report to administrator
+1 #6 Lakwena 2021-04-06 10:50
I have no words that can describe Kasaija. The best I can suggest is that: he should join Opeto on Radio Simba Jonto six o'clock morning comedy.

In other words and honestly, Hon Kasaija is by far the worst Minister of Finance whom you take seriously at your own risk. His uselessness is in his lack of seriousness.
Report to administrator