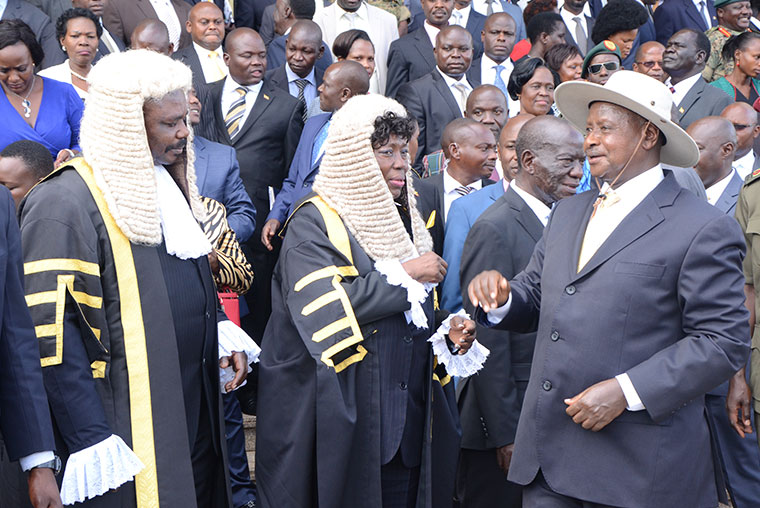 Under normal circumstances, the ruling NRM with its numerical strength in the new parliament should be able to dictate and frame the current debate about who should steer the 11th parliament.

NRM has 400 out of the 529 newly elected MPs. But the infighting and intrigue within the ruling party, which continues to spill into public view, is creating a narrow opening that would ordinarily be totally closed for outsiders like Ssemujju Ibrahim Nganda to challenge Rebecca Alitwala Kadaga, who has been in the speaker’s chambers for at least 20 years – 10 years as deputy speaker and 10 years as speaker.

Kadaga is on course to record the longest streak as speaker of parliament if she wins re-election in May. But to do so, she must ward off competition from her deputy of  10 years, Jacob Oulanyah, who maintains that this is his time to grab the much-sought-after seat.

If there’s any truth in what Government Chief Whip Ruth Nankabirwa Ssentamu said recently then Kadaga is treading a perilous path to victory. Nankabirwa told parliament recently amidst protestations from Kadaga and her army of supporters, that the NRM Central Executive Committee (CEC), the second highest policymaking organ of the party, had agreed in 2016 that Kadaga would relinquish the speakership to Oulanyah in 2021 after he was persuaded to stand down.

“CEC sorted out the matter the other time. It persuaded one to step down for the other. That will remain a fact, that is what I posted here some time back,” Nankabirwa said referring to a message she posted in a WhatsApp group of NRM MPs.

While meeting some MPs from Busoga last Sunday, Kadaga debunked the narrative of CEC making decisions that bind future parliaments. She said CEC plays no role in the election of a speaker.

She added that circumstances have since changed because the previous time, CEC wanted her to step down from the position after only five years yet her predecessor; Edward Kiwanuka Ssekandi had served two terms. According to three people we interviewed for this story, Kadaga’s bid for the third term as speaker would be doomed if it was down to CEC to decide.

“She is trying to demonize CEC so that it becomes hard for them to take a decision on her. By the look of things, it seems CEC; save for a few people is united against her,” said one person with direct inside knowledge of CEC.

According to the NRM Constitution, CEC provides political leadership in the country, formulates party policies and also selects candidates to contest for the highest positions within the party and its national flag bearers.

Its decisions are normally final and binding save for a few that are rubberstamped by the delegates’ conference. Therefore, even this time round, CEC is expected to make its pronouncement on who will be the NRM candidate in the parliamentary race. However, Kadaga’s surrogates who talked to us for this story said with or without CEC’s endorsement, she will be a candidate for speakership.

“I have asked the speaker several times before I declared my support for her whether she will be a candidate and she has in no uncertain times said she will be regardless of what her party decides,” said Asuman Basalirwa, [Jeema] the MP for Bugiri municipality who has already declared his support for Kadaga

“We welcome their endorsement and it will make our work a lot easier but mark my words, Kadaga will be a candidate and she will win this race whether Museveni likes it or not,” said another MP.

According to this MP, Kadaga is quite popular among majority of sitting MPs and if it they were to choose the next speaker, then she would be assured of victory. However, according to another MP, Oulanyah has reached out to a number of new NRM MPs and he seems to have an edge over Kadaga. He has also already scooped endorsements from the Lango and Acholi parliamentary caucuses. Kadaga is yet to galvanize support from Busoga sub region.

“They have tried to hold a press conference to come out with a position but there is no consensus yet within the Busoga caucus. There are people who are openly against her while others don’t want to be seen to be taking a position before they know what Museveni’s position is,” one MP said.

Last Sunday, Kadaga met less than 20 MPs of a caucus of about 50 MPs from Busoga sub region. But Basalirwa rejected the notion that Kadaga doesn’t have the full support of Busoga region.

“Yes some MPs didn’t attend the meeting but they sent apologies. I can tell you the caucus is united behind Kadaga,” Basalirwa said. He said it is not wise for the caucus to pass a resolution declaring their choice.

“I’m totally against it, why should the caucus hold a press conference to declare support? It’s a given that we support her not because we come from the same region but because we believe she’s a better candidate than Oulanyah,” Basalirwa said.

The Observer spoke to four MPs within NUP and three said they will support Kadaga because she presents a realistic chance of defeating the NRM candidate if that candidate is not her. One MP said there is consensus in NUP that although Ssemujju might be a good candidate, he has no realistic path to becoming speaker.

“The NRM is fighting Kadaga because of her independence and pro-people actions. As a party, we would like to support someone who cares about the concerns of the people,” one youthful MP.

Another MP said that much as they have not held a formal meeting to decide who the party will support for speaker, senior leaders of the party have all emphasized that it would be important to support someone who is willing to accommodate people of divergent views.

“They tell us that our interest will be best served if Kadaga is the speaker. But I find it a bit contradictory that we say its time up for all the old people in government and we are not supporting Ssemuju who is the candidate of our generation and he has fought so hard for a better Uganda,” one NUP MP said.

Apart from new comers, NUP incumbents who decamped from DP are also working closely with Kadaga. Asked who NUP will support a few days after he made a personal statement on the floor of parliament about the abduction of his supporters, Kyagulanyi Ssentamu Robert, the NUP president, said talking about the speakership race then was diversionary.

NUP Spokesman and Nakawa West MP elect Joel Ssenyonyi said the party has zeroed on any candidate yet. “Our focus now is on rescuing our comrades who have been kidnapped by the regime. We still have time to discuss the issue of the speaker. And if we come up with a position we shall communicate it to the public,” Ssenyonyi said.

Last Monday, the party held a caucus meeting and resolved that those who had publicly declared their support for different candidates should hold their guns until a retreat is held to harmonize their position. MP John Baptist Nambeshe, the deputy president in charge of Eastern Uganda, said as a party they can’t just be cheerleaders of others.

“We have not anointed any of the candidates. We are also not able to predict whether NUP has a candidate. We may surprise you. Those who are running should know that NUP is not merely for rent or hire,” Nambeshe said. Mathias Mpuuga, another NUP deputy for Buganda said; “We shall not be cajoled to support anyone; we are not anyone’s foot soldiers or escorts in parliament.”

One MP said NUP is in the process of identifying a candidate for at least the position of speaker or deputy speaker.

“A section of our supporters have been very bitter with us supporting Kadaga, an NRM candidate. We should have supported Ssemujju but there are many MPs who don’t like him in our party. So really we think we should have our own candidate,” the MP said.

If Ssemujju keeps in the race up to the finish line, some Kadaga strategists think it will hurt her chances of becoming speaker if NRM opts for another candidate. But Ssemujju says the only reason he will stand down from the speakership race is if the opposition comes up with another candidate. DP has already fronted Richard Ssebamala, the man who defeated Edward Kiwanuka Ssekandi, the vice president, to become MP for Bukoto Central.

“Does the opposition want to fold its hands and turn itself into spectators of these processes? If the opposition chooses another candidate who is not me, I will gladly give way because the opposition must field candidates…,” Ssemujju said.

In an interview with The Observer, Ssemujju said although it might be narrow, nonetheless, there is a path for him to become the next speaker of parliament. He says with the polarization currently in parliament there are MPs on both sides who have reached a point of not voting for either of Kadaga or Oulanyah if anyone of them is favoured by the party and the other steps down.

Another incident goes back to the days when, after getting chosen as speaker for the outgoing Parliament, she decided to go to traditional healers shrines to offer sacrifices. She said it was demons that had made her succeed. Should she come back as Speaker?
Report to administrator
0 #2 Kasede 2021-03-31 15:41
Quoting Webz:

Another incident goes back to the days when, after getting chosen as speaker for the outgoing Parliament, she decided to go to traditional healers shrines to offer sacrifices. She said it was demons that had made her succeed. Should she come back as Speaker?

We have a youthful House. Anything can happen in there.
Report to administrator
+1 #3 alex erejo 2021-03-31 16:24
Does the President and his CEC have moral Authority to rule Kadaga out of the race?

Kadaga delivered the Age Limit Removal and its now her time to eat after work. Besides why should everything change except one man?
Report to administrator
0 #4 TK 2021-03-31 19:28
But I had Hon. Kafuuzi Jackson is also vying for deputy speakership post.

Does the President and his CEC have moral Authority to rule Kadaga out of the race?

Kadaga delivered the Age Limit Removal and its now her time to eat after work. Besides why should everything change except one man?

Alex two wrongs do not make a right. The fact that someone has done something unjust or dishonest is no justification for acting in a similar way.

I hope Kadaga will be rewarded for delivering Age limit with being dumped.
Report to administrator
0 #7 WADADA rogers 2021-04-02 13:35
Verily verily do i say unto to you,you can steal money or whoever under mines M7's authority does so at his/her own peril, if indeed he told them to stop campaigns and they continued, M7 will do without both.

He will go for Rwakojjo and Oboth Oboth for deputy and speaker respectively. The Candidate (Semujju) Will have a chance to attack from the rear, he must get Kadaga to redirect her supporters to him.
Report to administrator