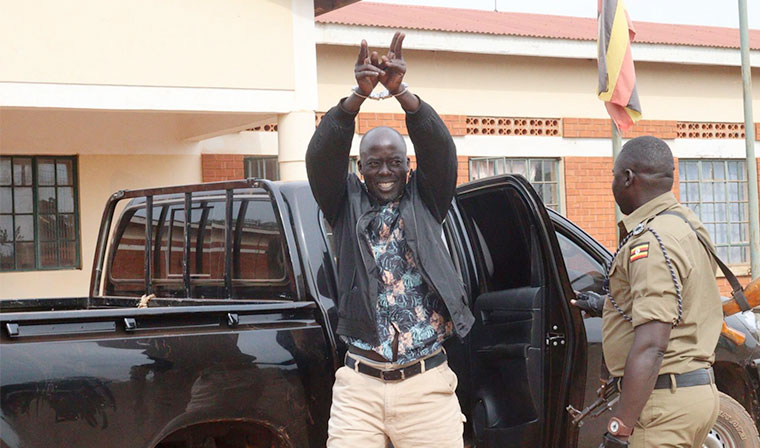 Otto was granted cash bail of Shs 2 million by Pader Grade One magistrate Edward Akwankwasa Bayo today Tuesday. Otto was represented in court by his lawyers Charles Dalton of Dalton Opwonya and Co Advocates and his wife Juliet Oyulu Otto.

Otto’s bail hearing came just four days after the same court denied him bail and remanded him to Gulu prison after he was charged with two counts of causing bodily harm and malicious property damage.

According to the prosecution, Otto is accused of assaulting Henry Mugisha a driver of a Fuso truck registration UAR 234C and smashing the vehicle windscreen. The incident reportedly happened on May 6, 2018, at Ogan Kanakok, Pajule sub-county in Pader district.

Otto however denied all the charges against him on Friday last week. The MP’s woes begun on Tuesday last week after his arrest in Gulu city by the police led by the deputy director at the Criminal Investigation Directorate (CID) Francis Olugu. He is also facing two other charges of illegal possession of a firearm and assault on a journalist. Otto is expected to appear in the Magistrate’s court in Gulu later today for mention of the case involving the assault of a journalist.

Earlier in his submission to the court, the resident state Attorney, Patrick Ojara noted that the sureties produced by the accused defence lawyers were substantial. He, however, urged the court to set stringent terms for the accused.

Bayo while granting Otto bail cautioned him against involving himself in any activity that might disrupt the court process. Otto is expected to re-appear before the same Court on April 6. The accused's lead lawyer Charles Dalton Opwonya welcomed the court decision to grant bail to his client saying that it’s his constitutional right.

At this rate of being behind bars for for his erratic and a thug that he has demonstrated himself to be; socially, politically and financially, Odonga Otto is going down too fast in a free fall.

In other words the students of History, especially those in Pader District and Acholi Sub-region; will be learning some lessons on "Cause and Effect: The Rise and Fall of Odonga Otto".
Report to administrator