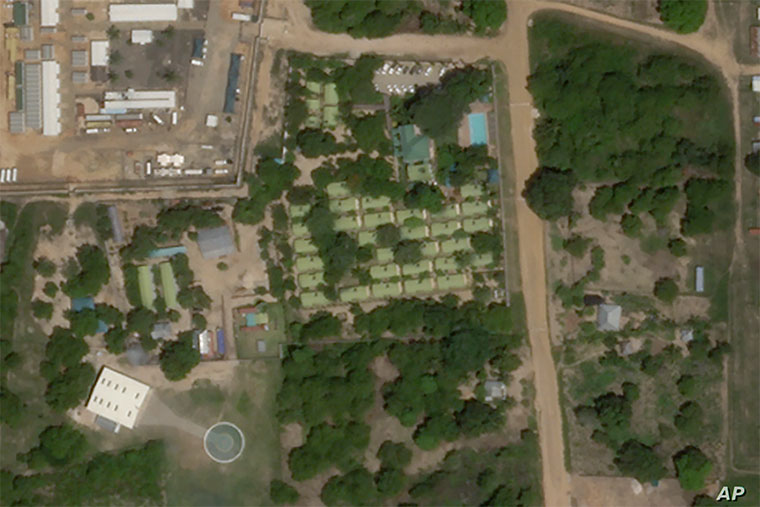 This satellite photo from Planet Labs Inc. shows the Amarula Palma hotel, center, with its helipad below left, in Palma, Mozambique, January 7, 2021

Islamic State (IS) claimed responsibility Monday for a dayslong attack on the northern Mozambique town of Palma that began last week and has prompted thousands of people to flee.

Dozens of people have been killed in the ongoing fighting that began last week in the Southern African nation, according to government officials. IS said Monday through its Amaq News Agency that it was now in control of Palma, a town of about 75,000 people. The claim could not be independently verified.

On Sunday, Mozambique officials said they were fighting the rebels in several locations to regain control of the town. Islamist insurgents began a coordinated attack last Wednesday on the town, which is about 10 kilometres from a multinational gas project run by oil majors, including French energy company Total.

Agence France-Presse reported Monday that the town was all but deserted after thousands of people fled the fighting. Many residents ran into the tropical forest surrounding the town to escape the violence. However, The Associated Press reported that a few hundred foreign workers from South Africa, Britain and France gathered at hotels that quickly became targets for the rebel attacks.

The total number of dead and missing from the violence remains unclear. A spokesman for UN Secretary-General Antonio Guterres said Monday, “We are deeply concerned by the still evolving situation in Palma where armed attacks began on 24 March, reportedly killing dozens of people, including some trying to flee a hotel where they had taken shelter.”

Henrietta Fore, director of UNICEF, the United Nations’ children’s fund, said in a statement Monday that the town was hosting more than 35,000 people forcibly displaced from other areas of the province because of previous attacks, with half of those children.

“We still do not know the full impact that the deadly militant attack in Palma, northern Mozambique, has had on children, but we fear that it will be brutal,” Fore said.

Islamist rebels affiliated with IS have been carrying out attacks in northern Mozambique since 2017. Earlier rebel attacks prompted Total to suspend work in January on a project to extract gas from offshore sites. The United Nations says the insurgency has left more than 2,600 people dead and displaced an estimated 670,000 people.

0 #1 Mbeho Achuc 2021-03-30 21:51
Those IS African based fools must be stopped in their tracks and punished...How long will Africa take standing stupidly by as such fools defame Africa???
Report to administrator
0 #2 Kalibbala 2021-03-30 21:54
Islamic State in Mozambique?? NO WAY! that is a Hoax! That is The Curse,Kisiraani and Enemy of Humanity himself running Amok!

He is trying to Divert the World From Uganda where He Stole The Vote to continue Killing,Abducting and Maiming Folks! he was Responsible for the Killing of The Italian Ambassador in DRC Congo!

All these Wars in Africa are his Own Making! Rwanda Closed its Borders Two Years Ago..Kenya is Following Suit Soon!

Uganda became a Failed State Where Police Are ALL CRIMINALS..Abusing Ambulances to Extort Money from Impoverished Ugandans...20.000 People have been Brutally Killed by SFC, A Militia Force Commanded by the MAD Son of The Curse..Muhoozi Kainerugosi..
Report to administrator